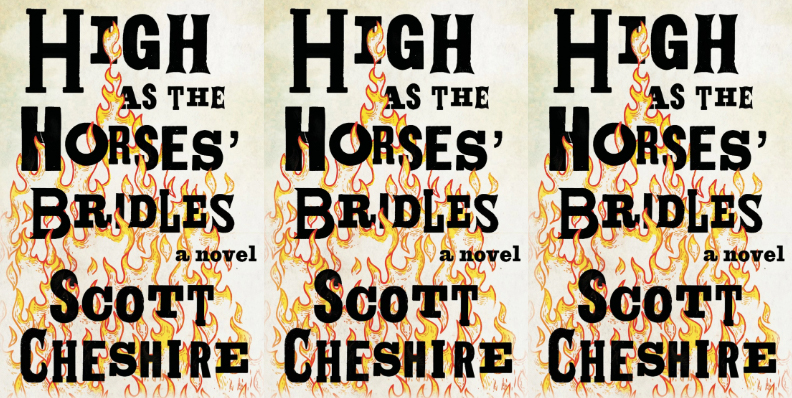 In his remarkable debut novel High as the Horses’ Bridles, Scott Cheshire tackles the loaded subject of faith and religious fanaticism in America with the same élan, sophistication, and depth found in HBO’s neo-noir series True Detective. I had the pleasure of asking Cheshire about the parallels between his novel and the hit show. Read on to see how these two masterpieces collide, intertwine, and ultimately shed light on each other.

Q. Your narrator Josiah Laudermilk and Detective Rustin Cohle share a peculiar kinship. Both men dream dreams and have visions. Both are storytellers and armchair philosophers. Both are skeptics when it comes to faith and religion. And both–one a homicide detective and the other a former preacher–are looking for the missing pieces that will make their narratives whole. What do you think these two might talk about, were they to meet?

Scott: You know, I think they’d get along. Although I think while Josie would really enjoy Cohle’s company, Cohle might find Josie a bit unstable. Imagine that! Cohle calling somebody unstable. But I mean not as stable with regard to a particular world perspective (I’m not talking about booze or substance abuse, here, or Cohle’s instinct for violence).  Cohle’s take on the world is actually quite stable, even dogmatic, at times, which is one of things I like most about him. He knows who he is.

In fact, he thinks he knows who you are, too. He’s like Nietzsche crossed with “Bud” White (played by Russell Crowe in the film version of James Ellroy’s L.A. Confidential). God is dead and he’s going to find the motherfuc*er who killed him. Josie, on the other hand, knows very little. He’s lost. He’s trying embrace and divorce himself from his own past at the very same time. Which is exactly what Cohle’s trying to do, come to think of it. Maybe they’d talk about that. They would try and be “present” together, and talk. Drunkenly.

Q. Both your novel and True Detective present a nonlinear timeline, one that focuses less on chronology and more on (to borrow a phrase from your novel) the “echoing swirl” of the past. In your mind, how did the structure of the book deepen its meaning?

First of all, thanks for quoting my book. I can get used to that. As far as “time” on True Detective, that’s what first got me hooked. What’s fascinating about how the show handles it, and why I think it’s so successfully done, is that both “times” are shown as “present.” They feel present. Even after we understand the interview with Cohle and Hart is the actual present, they both feel that way. Presence is really just a conflation of the long past and the immediate past.

This is exactly the sort of thing I was going for in the middle section of the novel. The treatment of time is very different in the three sections. The first and last sections try and approximate the more epiphanic revelatory arc of time, which to a lesser extent is how most stories are structured. The middle section tries to dramatize the loss of that perspective. Josie is trying to be in the world, to find meaning in it, now, always now, which required a more circular type of storytelling, going back and forth in time, one that hopefully all feels present for the reader, like it does for Josie.

Q. Let’s talk a bit about faith and knowledge. In one episode of True Detective, Rustin states that “certain linguistic anthropologists think that religion is a language virus that rewrites pathways in the brain. Dulls critical thinking.” Is there a meeting place between faith and knowledge?

I don’t buy that take on religion, mostly because it’s way too reductive, but also because it’s just not practically evident for most. Don’t get me wrong, I love reading theories like this. They’re all opportunities to reconsider what I think I know. But the real problem with most of the more academic or faith-based conversations about religion is they leave out a tremendous part of the puzzle. The millions like me who were “given” faith, who were born into it, but left; and while it did not take, for the most part, I (like so many) am endlessly fascinated by the subject. I am not, however, fascinated by any flu, pox, fever, or other viruses I have suffered.

I think the meeting place between faith and knowledge—or religion and intellect, however we want to put it—is simple: love. Unfortunately, too many on either side are not interested in really practicing such a thing. They think of it as too simple, but love is far from simple. Philosophy, religion, and science are all rooted in love, for knowledge, for God, for progress. I would argue those are all the same thing.

When any of their practitioners veer from the path of love, the way toward benevolence for humanity, they go wrong, backward, and come dreadfully close to practicing the only sort of evil I believe in. Josie’s father is a good example of this. Is he “crazy”? Absolutely not. He is acting out of love, essentially, and loss. He hurts himself, yes, but not others. He is deliberate and focused and seriously intent on making meaning out of his own death and the death of his wife.

Q. In the world of True Detective, warped religious fervor results in violence. In High as the Horses’ Bridles, it results in disillusionment. Any thoughts on the disparity between the two?

That’s a super question, and a really important one. I think it has to do with the utility of religion—I should say the utility of a religious perspective. And it always has utility. What does it do for the faithful? I think in the case of religious violence it has to do with utter dread, pure and all-consuming fear of death, a fear that is so all-encompassing that it turns into a sort of death worship.

Think of it this way—I have a fear of death, yes, I’m obsessive that way, but the way it manifests in me is my love of truly frightening films. Not “horror.” Horror is generally not very scary. I mean actually frightening, scary as hell movies. I sort of embrace it, get as close as I can to sort of “master” death, and beat it. I think religious violence functions this way, but on a grossly exaggerated and perverted level. It sort of worships death. It should be said, and this is even scarier, that that sort of perspective can be taught, instilled into young children, who need not fear death at all. It simply becomes what they know. Then again, while this makes sense to me, I’ve never experienced homicidal urges. But I have experienced disillusionment, deeply so.

Which brings to mind how the religious element is present in this comparison, but only because we are comparing them. It’s not a necessary element for murder or sadness. The murderer murders, yes, but, the religious murderer murders religiously, is what I mean. Religion provides context for action. It doesn’t provide action. My disappointment and Josie’s, his father’s, all have to do with religious expectation because our lives were and are religious to some extent. That said—if I had not been born into a religious home, who knows how it might have manifested. Maybe I would have been a teenage goth.

Q. I also couldn’t help but notice that your novel and True Detective conclude with ruminations on the magnetic pull of death and darkness, the power they wield, and humanity’s quest to conquer them. So lastly–an unanswerable question. Do you think there’s a place in the afterlife for skeptics?

Well, I guess I’d have to ask you skeptical about what? About God? About heaven? About what comes after death? If there is an afterlife, and there is a God, I am certain of this much, God will say: What made you think you knew anything about this, at all? You were wrong. You were all wrong.