Over the past three and a half months we’ve introduced the first ever Ploughshares Fantasy Blog teams and analyzed their selections in the draft—and now it’s time to test the team-building skills of our Fantasy Blog Managers in brutal competition… But before we do that, the commissioner thought it would be fitting to give this competition its proper respect: after all, in this age of New Media, every competition deserves a week or more of hype to suss out all of the storylines.

Also, there’s still time to fill out a bracket and win yourself a subscription to the magazine as well as a Ploughshares tote bag which you can use to carry your copies around. FILL OUT YOUR BRACKET HERE after you check out the team previews below! 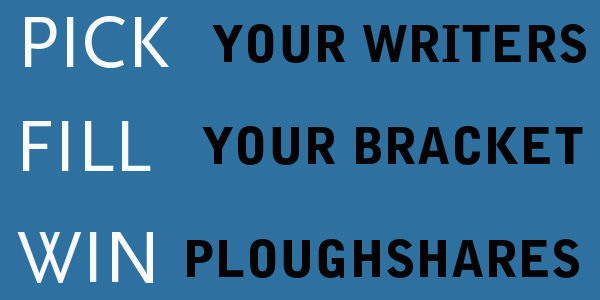 Because we have six teams, two of the participants get a bye in the first round. These two teams are Michael Nye’s The Holden Caulbabies and Jordan Kushins’s What the Chuckin’ Buk?!:

These two teams represent very different strategies. The Caulbabies are a literal literary powerhouse, led by the “Big Three” of Faulkner, Montaigne, and Baldwin. It might be argued that a more powerful salon has not been created since the summer of 1816 when the entourages of Mary Shelley and Lord Byron teamed up on Lake Geneva. Assuming Montaigne doesn’t get injured trying to come down from his tower while delivering his copy (he insists on writing longhand), the Caulbabies and their playful attitude are the odds-on favorite to win.

What the Chuckin’ Buk?!, on the other hand, are a group of literary “mavericks.” These are writers, poets, editors, and designers who may have the most potential to go en fuego, delivering a product that packs serious punch—they just haven’t been able to take advantage of their talent completely in the past. Notably, Kahlil Gibran and Boris Vian died young or without being too prolific. You know what they say about Fantasy Blog competitions, though: you never know what can happen on any given Tuesday.

These two teams will be resting up before the second round, which leads to the inevitable question: in Fantasy Blog competitions, do you get rest or rust?

Two weeks from now we will feature the first of two First Round matchups, where readers will be able to vote for the winner. (And effectively skew the tables in favor of their picks—so remember yours!) The first matchup is Justin Alvarez’s Leave it to Cheever against Ben Samuel’s The Mighty Duck Palahniuks. (A side subplot is that this pits The Paris Review against Electric Literature.)

Plimpton versus Silvers! Vonnegut versus Barthelme! Hunter S. Thompson yelling madly at people about how they should eat more grapefruit!

This matchup promises action across the board with legends at the Editor and Fiction positions and a wide range of role players. These two teams, like the two bye week teams, are so different from each other that they feel almost like two houses from Hogwarts being pitted against each other. Leave it to Cheever is somewhere between Hufflepuff and Ravenclaw: not only do they have “wit beyond measure,” they are also “true and unafraid of toil.” The Mighty Duck Palahniuks, while they are named after underdogs, have shaped up like a pack of rascally Slytherins, ambitious and cunning; but the Blog Draft Sorting Hat clearly did not take into account blood purity: there’s a huge range here from Herzog to Dickinson.

The second matchup features Brenna Dixon’s Vonnegut to the Chopper! against Joumana Khatib and Marty Kezon’s Buckle Your Corn Belts. (This is Ploughshares’ in-house blogger against folks from The Kenyon Review.)

The commissioner has gone full circle with the Corn Belters. Midway through the picks, he thought that the team was too American, but now they feel young and powerful and strangely nationalistic, much like the Russian weightlifters of the 80s or the Foster Wallace/Eugenides/Franzen/Karr friendship of the same era—in no small part because DFW and Eugenides are both on the team. Vonnegut to the Chopper! is another powerhouse with a lot of American players and a handful of savvy international picks; not unlike the Michael Jordan era Chicago Bulls—which featured Tony Kukoc—Bolaño and Woolf add another dimension to this team.

And again we have an epic battle of legendary editors—Nobel Prize winner Toni Morrison against Maxwell Perkins:

Make sure to get your picks in (THE LINK IS HERE!) and secure your chance to win literature. And check back in two weeks to vote on the matchups and help our literati Blog Managers win the competition!