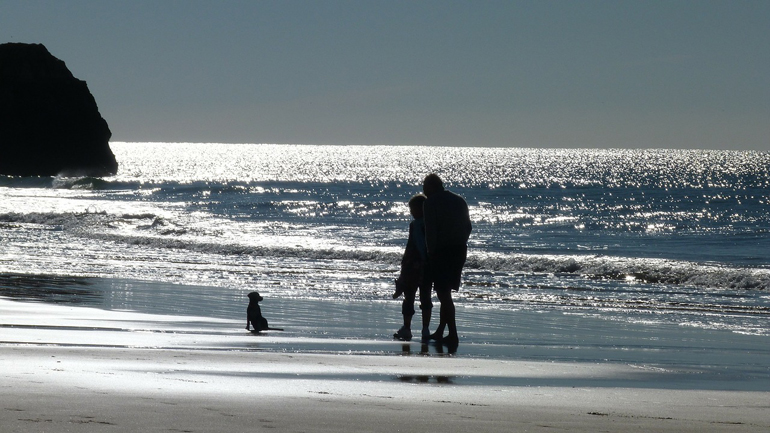 Chekhov’s linear story is written from the point of view of the man, Dmitri Dmitrich Gurov, who is having an affair with Anna Sergeevna, the lady with the dog. The point of view is relatively close to Gurov; we see the world and Anna through his perspective. There are moments, however, where Chekhov pulls back somewhat, so that we get a fuller perspective which encompasses both characters. This clearly happens at the end of the story, when the couple realizes that they wish to be together:

And it seemed that, just a little more—and the solution would be found, and then a new, beautiful life would begin; and it was clear to both of them that the end was still far, far off, and that the most complicated and difficult part was just beginning.

Oates tells the story through the point of view of the woman—Anna, as well—and responds to the circularity at the end of Chekhov’s story by employing a cyclical structure throughout her story. We begin at a concert—a point midway through the chronological story—where Anna spots her lover. We return to the concert two more times over the course of the story, learning and seeing a bit more with each return. From the start at the concert, we move back in time, to where the couple leaves Nantucket, where they have met, and then we move back in time again to when they first meet. The exact midpoint of the story is the moment that they meet. Throughout the story, Oates plays with this circular structure, often referring to it in the text, in Anna’s thoughts and words: “Everything is repeating itself. Everything is stuck.”

Oates, by not naming either of the men in the story—the husband or the lover—creates intentional confusion between the two characters, speaking to the doubleness that exists throughout. Anna often thinks of one man while she is with the other:

She lay in his arms while her husband talked to her, miles away, one body fading into another. He will grow old, his body will change, she thought, pressing her cheek against the back of one of these men.

With Chekhov, the doubleness is also present, but the lives are separate, with one life always hidden from the other, as Gurov believes that “every man led his own real and very interesting life under the cover of secrecy, as under the cover of night.” Gurov has had multiple adulterous affairs while in Oates’s version it is not clear whether her protagonist has had other affairs, although it seems unlikely.

In both stories, the dog is central to the initial meeting between the characters. In Chekhov’s story, the dog belongs to Anna and is introduced in the first sentence. The dog—whose name is never revealed and forgotten by Gurov when he sees the dog later—is connected to the woman in that she is described, by others in the resort town, as “the lady with the little dog.” The dog does not enter Oates’s story until the middle, and the dog does not belong to Anna but instead belongs to the man who will become Anna’s lover.

The fever in her husband’s body had touched her and driven her temperature up, and now she stared at the drawing with a kind of lust, fearful of seeing an ugly soul in that woman’s face, fearful of seeing the face suddenly through her lover’s eyes.

At the end of Chekhov’s story, as noted earlier, Gurov and Anna decide that they want to be together, that they want to rid themselves of the deception. It seems, however, quite unlikely that this will come to pass. Anna, in Oates’s story, also realizes that she belongs with her lover, but instead of losing the doubleness and the deception, it is within that doubleness that she finds her happiness:

This man was her husband truly—they were truly married, here in this room—they had been married haphazardly and accidentally for a long time. In another part of the city she had another husband, a “husband,” but she had not betrayed that man, not really.

Anna’s guilt and “shame”—an emotion mentioned frequently throughout the story—have disappeared. She sees herself as being with this man, more so than with her husband; there is no shame because he is the one who is her “truest lover.” The ending, while ambiguous, seems to indicate that Anna will end up with her lover; the power and strength that Anna now represents, however, is clear and absolute.