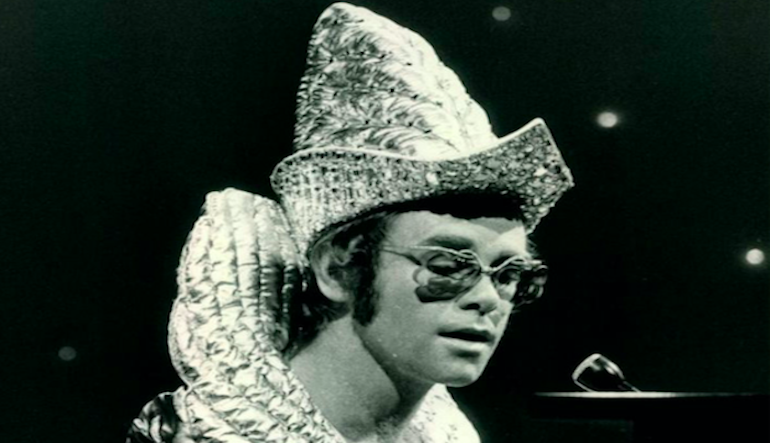 Forty-five years ago this week, Elton John’s single “Rocket Man (I Think It’s Going to Be a Long, Long Time)” was released. Rising to the sixth spot on the Billboard Top Forty and included in the album Honky Chateau, the song is a classic example of early seventies soft rock. Co-written by John and Bernie Taupin, the song is based on the science fiction short story “Rocket Man” by Ray Bradbury, published in The Illustrated Man in 1951. Both the story and the song are reflective of their times. Somewhat fortuitously, the single “Rocket Man” was released the same week as the Apollo 16 launch, and echoes of the story can still be found on the surface of the moon.

Bradbury’s story was written in the shadow of World War II, seven years before NASA was established by President Eisenhower. It is narrated by Doug, a fourteen-year-old boy, whose father travels to space for three months at a time. During the present moment of the story, the father is home, and yet the story pivots between the father’s desire to be in space and to be at home with his family. Lilly, Doug’s mother, has learned to deal with her husband’s absence by pretending. She describes this to Doug as follows:

As much as the story is set in the future—with the family taking the noon rocket to California for a jaunt or Doug sleeping in a rocking and singing bed—the domestic life at home feels classically post-war modern. The father heading off to and returning from work. The mother preparing meals and caring for the child. The son wanting to be a rocket man, just like his dad, although his dad cautions him against that: “Because when you’re out there you want to be here, and when you’re here you want to be out there.” It is Bradbury’s genius to marry the fantastic with the real.

The first thing that Doug does after his father returns is to steal his suitcase and explore its contents. In his father’s uniform, he finds evidence of the life his father leads so far away: “I smelled the planet Mars, an iron smell, and the planet Venus, a green ivy smell, and the planet Mercury, a scene of sulphur and fire; and I could smell the milky Moon and the hardness of stars.” Doug’s father tries hard not to show his son the allure of his work. But, occasionally, it slips out as he shows his true allegiances: “It’s the best thing in a lifetime of best things.”

And then he leaves again, this time never to return. A messenger arrives, and we learn that “His ship had fallen into the sun.” We know this is coming, and yet reading that line remains devastating every time. We hold onto hope that he will return, that he will choose family over career.

In the reformulating of the story into song, John and Taupin changed the narrative point-of-view. The story is now told by the rocket man himself, and the son doesn’t appear. The pervasive theme is loneliness, which seems to be a necessary by-product of the working man. That first line—“She packed my bags last night pre-flight”—is notable for the unnamed “she” who appears to be eager, or at least ready, for the narrator to leave. The striking consonance of that line means that it is instantly memorable after being scanned; once the melody is known, it’s almost impossible to read that line without singing along.

It’s interesting how the tone of the song differs from that of the story. In Bradbury’s story, the rocket man is torn between his two lives. In the song, there’s a greater sense of fatalism and of loss, as though the rocket man has no choice. Although he says “I miss the earth so much I miss my wife,” he’s clearly not interested in caring for his progeny: “Mars ain’t the kind of place to raise your kids / In fact it’s cold as hell / And there’s no one there to raise them if you did.”

The refrain shows us how alone and misunderstood he feels:

The song ends with the first line of the refrain repeated seven times, slowly fading away. Like Bradbury’s rocket man, we know that John and Taupin’s man is never again coming home.

The song, though, continues to live on. William Shatner performed a spoken word version at the 1978 Science Fiction Film Awards, which has become a cult classic. Stewie Griffin parodied this version on Family Guy. And Elton John continues to regularly perform the song at concerts; it landed midway down Rolling Stone’s”500 Greatest Songs of All Time” list.

The world of April 1972 provides an interesting counterpoint to the song. Two days after the song’s release, Apollo 16 launched, landing on the moon on April 20th. One of the astronauts on the mission was Charles Duke Jr.; at age thirty-six, Duke became the youngest man to walk on the moon.

Duke had a young family: his sons turned seven and five that spring. We can imagine how thrilling it must have been for the boys to have their father setting out for the moon, and yet they must also have been aware of the danger involved. It’s hard not to consider the Bradbury story when we think of astronaut Duke and his family. Just twenty years after publishing the story, many of Bradbury’s prophecies were already coming true.

But Duke was unlike the rocket man in either the Bradbury story or the John/Taupin song. Duke was keenly aware that his children felt separated from him, and he thought up a plan to keep them involved. He explained this as follows:

So just to get the kids excited about what dad was going to do, I said, “Would y’all like to go to the moon with me? We can take a picture of the family and so the whole family can go to the moon.”

And that is exactly what he did. Before leaving the moon, Duke dropped a photo of his family, shrink-wrapped in plastic, on the surface of the moon, snapping a picture of what he had left behind. On the back of the photo, Duke wrote: “This is the family of astronaut Charlie Duke from planet Earth who landed on the moon on April 20, 1972.” Although no one knows for sure, it seems likely that the family photo is still there, evidence of a father who flew to the moon before coming home.