Home
»
Interviews
»
Flailing and failing and thinking: an interview with Stuart Ross 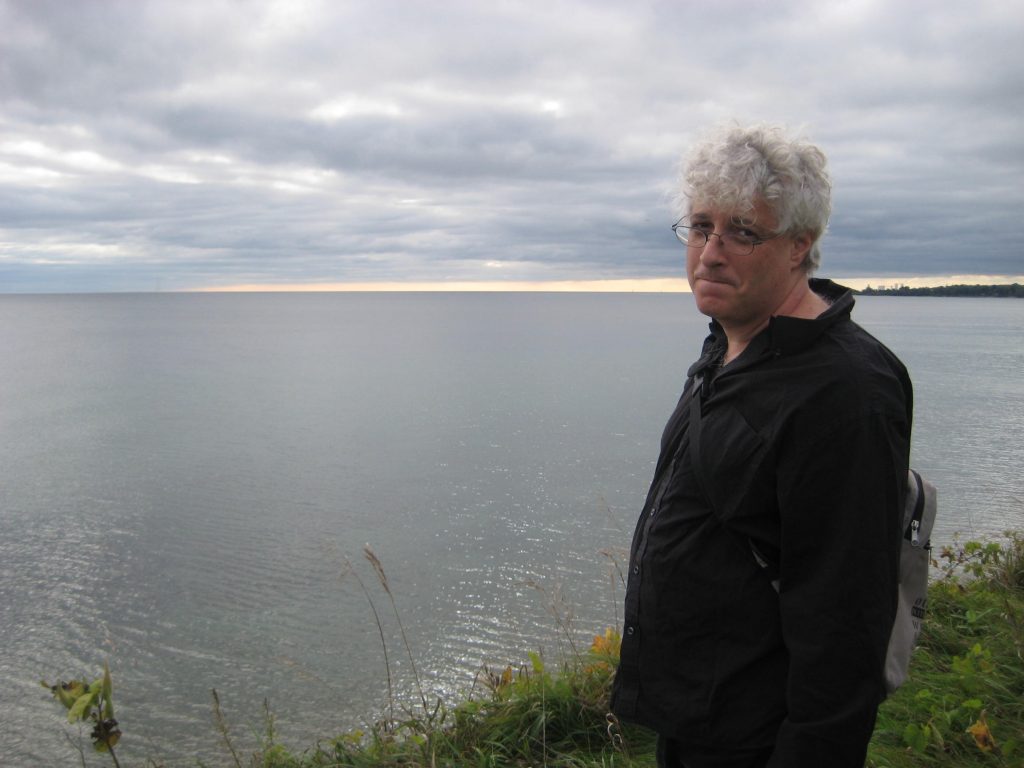 Over the past four decades, Cobourg, Ontario poet, editor, fiction writer and small press publisher Stuart Ross has become a Canadian institution. The co-founder of the Toronto Small Press Fair and the Meet the Presses collective, he sold some seven thousand of his self-published chapbooks on the streets of Toronto during the 1980s, with titles such as He Counted His Fingers, He Counted His Toes, Bad Glamour, Father, The Cowboys Are Ready To Come Down From The Attic and When Electrical Sockets Walked Like Men. Since then, he has produced fifteen books of fiction, poetry and essays, and his many dozens of chapbooks include Nice Haircut, Fiddlehead (Puddles of Sky Press), A Pretty Good Year (Nose in Book Publishing) and In In My Dream (BookThug). Editor/publisher of the seminal Mondo Hunkamooga, a journal that, for many years, was the finest, and often only, publication discussing small press materials in Canada, Ross is currently a member of the improvisational noise trio Donkey Lopez, whose CDs include Juan Lonely Night and Working Class Burro. His chapbook press, Proper Tales, recently turned thirty-seven, and he even has his own imprint, a stuart ross book, at Toronto’s Mansfield Press. He blogs at bloggamooga.blogspot.ca.

His most recent title is the poetry collection A Sparrow Came Down Resplendent, published by Wolsak and Wynn earlier this year.

Q: Your work has been known for years, as the catalogue copy for A Sparrow Came Down Resplendent reminds, for “being willing to take aesthetic and artistic risks,” and yet, you’ve talked about deliberately producing a collection of poetry that might be seen as more “mainstream.” I quite enjoy the irony of such, and wonder: what made you decide to attempt such a collection, and what do you see as being more “mainstream” that you were working to engage or emulate?

A: I’ll be honest. I’m getting old, and I’d like to see more people read my poems, and maybe see some good things happening with my poetry. So for this book, I decided I would mostly follow only one of the many tributaries of my poetry: the personal, narrative, more-or-less accessible poem. Not to say I wrote in a different way to create A Sparrow Came Down Resplendent, but I shut out the really crazy, disjunctive stuff, and let myself sail further into autobiography, the kinds of poems I had mainly done previously in my Razovsky series, which runs through three of my earlier collections, and will likely pick up in a later collection, and which tends to get positive response from non-poets especially.

If I can broaden my readership with this new book, it might be the gateway drug to my really weird shit, and new readers will explore further and find books like A Hamburger in a Gallery and You Exist. Details Follow. I have mostly been very lucky, in that I have easily found a publisher for every manuscript I’ve assembled, but expanding my readership has become an increasing challenge for me — there are a lot of young and exciting writers around who are deservedly earning what little attention and patience there is for poetry. So I’ll see what the Sparrow brings me.

Q: Do you really feel as though you’re competing for attention? I mean, more now than you’ve been throughout your long history of publishing?

A: First, you know, I’ve been thinking about that previous question a lot more. Who am I kidding that I’ve written a “mainstream” poetry book? Although I do think Sparrow is my most accessible poetry book to date, it’s downright weird. I mean, it’s pretty normal to me, but I recognize that people-who-are-not-me will likely find the poems strange.

When I write my poems, I don’t think of “competing for attention.” I write what interests me; I try to see if certain things are possible; I try to go beyond what I’ve written in the past. But I would like to have some doors opened for me: I’d like to travel to festivals more, I’d like to see my books reviewed again, I’d like another writer-in-residency someday (my spell at WIR as Queen’s in 2010 was one of the great highlights of my professional life). So in that sense, there is competition — I’m competing for spots at festivals, and residencies, and review space. And while I have never expected my poetry to be shortlisted for anything in the past, let alone a major prize, I wonder if this book has some chance. The one-word poems in A Hamburger in a Gallery weren’t going to win me these things. But as I was working on that book, I was also working on this book: will the personal narratives make this a compelling book to a broader audience? Really, though, who am I kidding? And I do hate competition. I have never before felt that I was competing. And you know, ultimately I don’t think of it that way this time around either. I am merely hoping.

Q: I find it refreshing that you’re so open to speaking to outside influences on your writing. Given you’ve been incredibly prolific and active in writing and publishing for nearly forty years, all the while very much engaged in the trenches of small and micro publishing, I would think that external influence, such as your attempt to compose a more “mainstream” collection, isn’t anything new in your work. Do you feel that there are two distinct sides to your writing: the more mainstream versus more surreal/experimental? Although I would suspect it might be far more complex than that.

A: I suspect your suspicions are suspiciously accurate. I’ve never thought of it in terms of there being two distinct sides to my writing. Though while I was assembling A Sparrow Came Down Resplendent, when I wrote poems during that period I’d either add to that manuscript or, if they were weird as fuck, I’d add them to what I saw as my next manuscript, tentatively called Motel of the Opposable Thumbs. (This was after A Hamburger in a Gallery was already published.) But I think my writing covers a broad spectrum in terms of experimentalism vs. weirdo vs. more accessible/mainstream. In an early chapbook of mine, Bunnybaby: The Child with Magnificent Ears, I referred to my writing as “Demento-Primitivo.” Alas, that didn’t really take off as the hot new school of writing.

But even in my last story collection, Buying Cigarettes for the Dog, there are stories that are almost conventional and there are really strange plotless explorations — and everything in between. I am not usually one to make a book where everything “fits together” or has a single tone or approach. As a writer, that doesn’t interest me. I’m a big fan of galloping off in all directions at once.

Q: Your work is part of a growing tradition of Canadian surrealism, something you worked to collect in your anthology Surreal Estate: 13 Canadian Poets Under the Influence (Toronto ON: The Mercury Press, 2004). How do you see our Canadian surrealism differ from the surrealism of other countries?

A: When Surreal Estate came out, the influence of surrealism hadn’t already so widely permeated Canadian poetry. Things have really changed, and I think it’s part of a general tendency toward surrealist imagery in film, music videos, novels, etc. Perhaps something to do with our quick-cut culture, and maybe also a recurrence of some of the social and political conditions that brought about the first Surrealist movement, and the Dada movement as well. I don’t think there’s much of a difference these days between Canadian “surrealism” and the American brand. But I think that the influence is far more apparent in our countries than in the U.K., for example. I can’t really comment on countries whose work is written in other languages: while I have read works in translation, I don’t have the full picture of what is going on in Norway, for example, or Chile.

Q: If one can see your work as existing in two threads – the more experimental vs. the more mainstream – how do you see these two sides interacting? Do they complement or compete?

A: Sometimes I think I should have deep, academic, theory-drenched things to say in interviews, but don’t think that way. As I said earlier, my work — I hope — covers a broad range of approaches and experiments, so again, I don’t think of it in terms of two threads. In fact, it’s dawning on me that my version of “mainstream” is many people’s version of experimental and weird. But let’s say your premise is correct, and I’m willing to experiment with a couple of academic words. It’s exciting to me that different things I have written can both complement and compete with each other simultaneously. My poems are involved, behind my back in a kind of dialectic relationship. I’m happy to just let them work it out to whatever extent they like.

I’d also like to use the word “praxis” in this answer, so I’m just going to go and look up what it means.

OK, I’m back — good, perfect… The praxis of my writing trajectory has always been that anything goes. I’ve never searched for a form or voice in which I would be comfortable, like a Sharon Olds or a Philip Levine or an Al Purdy way of writing (not to knock those guys; it just doesn’t interested me to do that as a writer). I’ve never allowed myself to get comfortable, because reaching the horizon would be really boring. That guy in Stephen Crane’s poem who runs futilely for the horizon? I can totally relate to him, but a) it’s impossible to reach that kind of closure (which is why closure rarely interests me in writing), and b) it’d ultimately be a disappointment to get there.

What excites me — and it’s exactly this attitude that means I won’t be studied in universities and I won’t win major prizes and I won’t ever be a “major” poet — is flailing and failing and thinking up harebrained literary schemes, most of which I’ll never realize, but some of which I’ll push past the finish line.

So I’m happy to let those threads of my writing duke it out while I go off and do other things.