Home
»
Book Reviews
»
Fiction
»
In Bookstores Near You: OUR HEARTS WILL BURN US DOWN by Anne Valente

Anne Valente’s debut novel, Our Hearts Will Burn Us Down, does not begin with the shattering moment when Caleb Raynor enters Lewis and Clark High School and opens fire—a moment that surely warrants the dimming of the lights, the rising of a curtain. But no, in Valente’s narrative, the shooting has already happened; it’s what gives her tale the sense of in medias res. What her first sentence, her first paragraphs, offer us isn’t the number of students and teachers and administrators shot and killed by Caleb but rather the fact that three days afterward, while the town is still at the summit of mourning, the first house catches fire. The home belongs to the family of Caroline Black–the young teen shot and left for dead in the school’s hallway as she happened to be returning to class after a visit to the ladies’ room. In the weeks that follow, every house in which a victim lived will burn to the ground, the family members’ bodies vanished, a mystery that cannot be explained.

Critics who lack an appreciation for metaphor–the way symbolism can express the inexpressible—may complain that Valente doesn’t adequately solve the mystery of the houses burned and the bodies, not carried out in coroner bags during the mop-up, but rather simply gone as if converted to ash. Perhaps these critics have never grappled with grief–been struck mute or catatonic in its aftermath. Sometimes in the wake of insurmountable tragedy, the best we can hope for, in terms of recovery, is an inexplicable blaze whose flames will ghost us out of this world. It is a metaphor Valente renders beautifully. It is not a scientific conundrum we are meant to investigate and fathom; at the end of the novel, grief and its power remains an enigma.

What is most striking about Our Hearts is Valente’s use of the first-person plural viewpoint, a rare thing in novels, but more than appropriate here as the bulk of the story revolves around the school’s yearbook team: four seniors who had big plans for the book they would edit and photograph and offer as a memorial to their classmates at the end of their senior year. An ordinary memorial, though: a recounting of tradition–ball games and plays and academics and graduation. But, instead, their senior year begins with gunfire, and what they will choose to record will either save the community or destroy it.

Valente easily moves from the collective “we” of the team into a closer psychic relationship with each of her four main characters, rotating into and through their individual stories of grief, then pulling the camera back and once again establishing the shot on their unified experiences. The shift is so skillfully handled that the reader hardly notices, and the flexibility allows Valente to address communal grief but also show us the various ways it destroys, how its brutality is necessarily different given each victim’s life circumstances. Some of the children learn to cope; some of the children dwindle.

Ultimately, the yearbook team sets about recording every detail of the final, devasting year of their childhood; as such, the novel is a seemingly endless incantation of objects and people and memories and classrooms. They gather and transpose, catalog and archive, and rearrange (the timeline of the novel shifts as easily and as deliberately as the narrative viewpoint). The teens hope that through the simple act of naming, they can resurrect what they have lost–and preserve what they stand yet to lose. 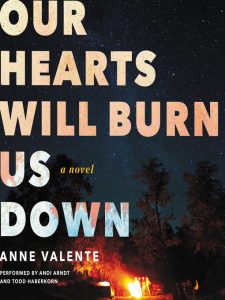 Tags:#amreading, #schoolshooting, Anne Valente, fiction, Our Hearts Will Burn Us Down