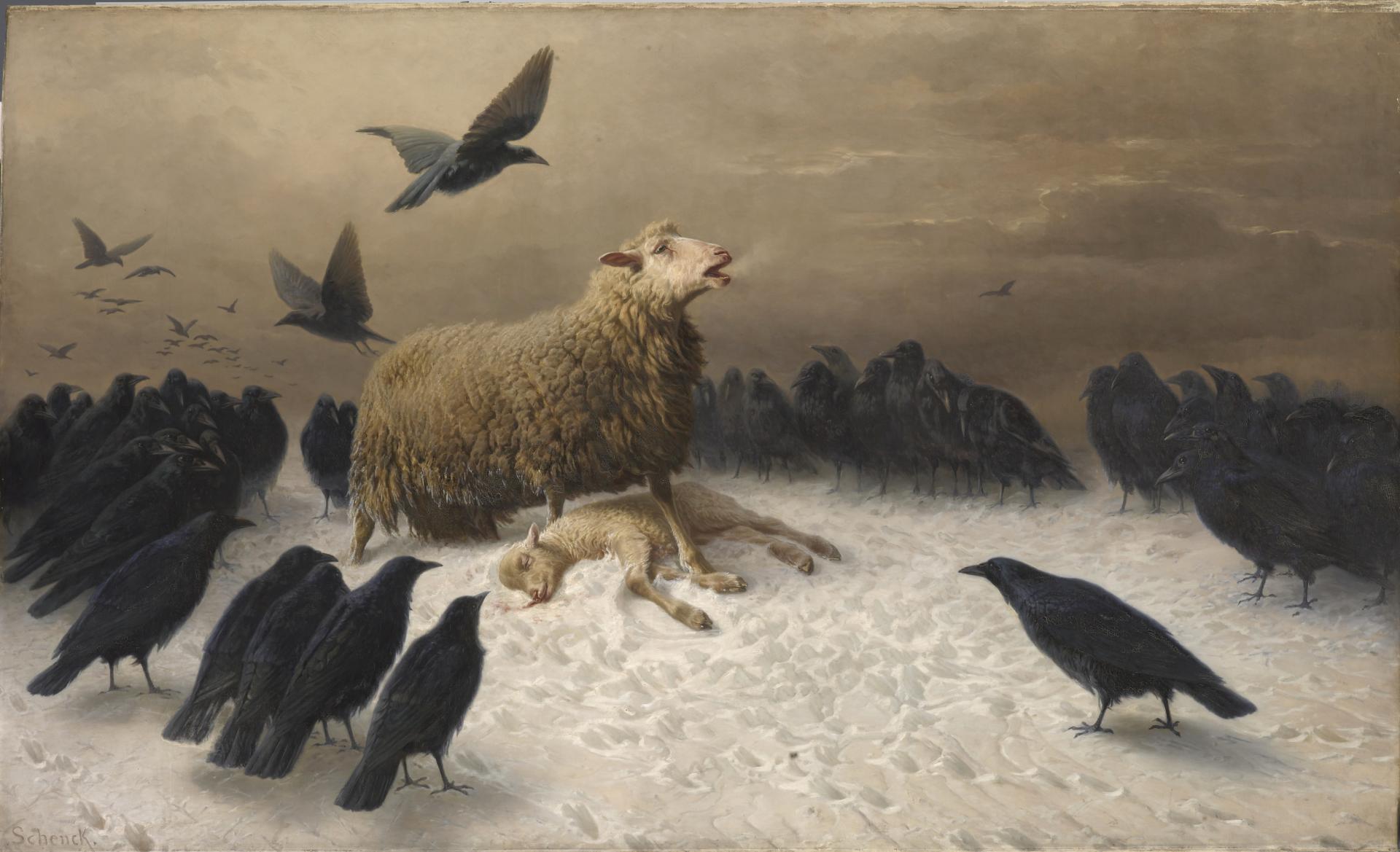 Emma Seckel’s The Wild Hunt makes the most of its fraught and carefully bound setting: in the aftermath of World War II, Leigh Welles returns from Edinburgh to her remote Scottish island home in the wake of her father’s death. Leigh arrives broke and alienated from her successful brother Sam, an army veteran; without other recourse, Leigh is forced to try to live a life on an island seemingly caught in time. The folk traditions that had been, in her childhood, perhaps quaint and suffused with only enough danger to be cautionary and exciting, seem increasingly desperate. The crows that arrive each October—called the sluagh—have become terrifying; islanders board up their windows and write warning signs in blood to keep them away. One man is missing an eye from an attack, and even animals as large as sheep have been found torn apart by the flock. The sluagh form one of the central mysteries of the novel: are they simply crows acting at the apex of their natural intelligence and stirred to aggression by biological and environmental factors, or are they, as some say, the unquiet and now malevolent souls of the dead unable to pass properly into the afterlife? Rather than answering that question early and directly, Seckel wields multiple strategies of constraint to expand the novel’s speculative possibilities and, most importantly, establish a thoroughly compelling set of character relationships that infuse the supernatural stakes with organic urgency.

In The Wild Hunt there are tangible constraints everywhere: the island’s surrounding sea, the scarcity of in-home telephones, the limited means of the inhabitants, the paucity of jobs and opportunities, the island’s small size and divisive geography. These constraints lead to a sense of separation: the vast majority of people who remain do not roam far, and those who leave the island do not return because there are no jobs, no opportunities to compel them home. Because of the island’s isolation, resources of all kinds are limited, so the number of people the island can support will only remain static or dwindle, not increase. The shadow of World War II in the novel’s immediate history adds to the feeling of scarcity as Leigh and others remember rationing tickets and a dozen kinds of doing without in order to support the war effort. The island has also made itself inhospitable to visitors, even after the war; the ornithologists and tourists Leigh remembers from childhood are absent in the novel’s present moment. The island remains closed off, as though all newcomers might be invaders: “The street signs had not been returned to the corners, and though the hour had just changed, the church bells were silent.” Leigh notes, “There was still blackout paper in one of the windows, torn and crumbling in the corners, peeling away from the glass. Across the street the post office was still plastered with the propaganda posters that had come at the beginning, when England was caught in the Blitz.” Over and over again, Leigh remarks on how nothing has changed in the years she has been gone, how alive the war seems still—which only throws into sharper relief how deadened everything else still is.

War-time practices combine with superstition to create additional boundaries: places that have been abandoned—which now means abandoned to the sluagh—are off-limits to the island’s residents, and the crows’ aggressiveness has prompted residents to board up their windows, thereby shutting many folks up in their homes, metaphorically and often literally. Spaces of all kinds are closed off, and the most important of these is an old farm, which becomes a site of mystery and discovery.

Seckel’s choice of point of view, though, is one of the deftest methodologies for magnifying the novel’s sense of isolation and deepening the novel’s speculative roots. The close third person narration of The Wild Hunt moves between characters central and peripheral but limits itself to those character-consciousnesses in relatively short, concentrated bursts. The result, then, is that each of the novel’s characters, on the page and often within the context of the story, is alone: in their thoughts, in their conception of themselves, and in facing their own traumas. Even when characters are existing in the same physical location and within the boundaries of the same chapter, their points of view are made separate by space breaks, as is the case in the novel’s inciting incident: the traditional ceremony and bonfire taking place at the start of October, when the sluagh arrive, and where a young man, Hugo, catches one of the birds and kills it. Hugo’s actions and his subsequent disappearance are what bring together Leigh and Iain, who is the only one of the islanders who fought in the war to come back and stay.

Leigh and Iain each have their own troubled relationship with the island and the people remaining on it, but their positions as relative outsiders—those who left and returned, and thus missed the escalation of circumstances with the sluagh—allows them to resist the depths of superstition and despair that prevent the rest of the island from searching in earnest for Hugo. The nearness of the book’s point of view, however, provides access to moments of speculation that prevent the characters and the reader from adopting a firm position of skepticism and realism. Even in relatively innocuous moments, the characters’ interiority suggests certain dualities and possibilities that escalate toward the supernatural while also illuminating central problems of the text. When Leigh returns home, she thinks, “It felt as though she had not been on this island for a hundred years, it felt like she had been here only yesterday.” Without even a mediating coordinating conjunction, both premises are immediately applicable, and this observation contributes to the novel’s extensive work yoking together present and past and, eventually, demonstrating the danger of being caught in the past, as the physical details of the town attest.

At the early October ceremony, before Hugo kills the crow, Leigh’s interpretation of the scene ushers in the joint power of doubt and imagination: “As though following some ancient choreography the onlooking crows took sudden flight from their perches on the standing stones and swept down through the air. Leigh squeezed her eyes shut as the air stirred with their feathers, squeezed them shut as she had every year, half expecting to feel the creatures’ talons scrape across her scalp like nails against a blackboard.” The “as though” furthers the potential that the crows aren’t simply crows, but in that immediate moment, the only danger presented lies firmly in Leigh’s imagination. The crows, in that moment, are not attacking anything, but Leigh—who is the reader’s first touchstone, the guide who can traverse the story in ways familiar and strange—is aware of the possibility, even anticipating it. Those kinds of incidents mount throughout the novel and gradually cede to what feels like incontrovertible evidence for the supernatural at work in this world, but the process of arriving there—through Leigh and Iain and Hugo’s experiences—makes it all the richer.

The characters’ interiority also mimics the central problem of the novel: it is not only that the inhabitants of the island cannot let go of the war and all the grief of the past, but that they cannot or will not confront the guilts and traumas that anchor them in that past, nor can they connect meaningfully with others. Leigh harbors feelings of abandonment after her mother disappeared in childhood that are now exacerbated by her father’s death and her brother’s aloofness. Sam, by leaving his home and family and refusing to talk about the war at all, builds a cold and near-insurmountable wall between himself and Leigh. Iain blames himself for myriad things related to his service in the Royal Air Force, but the two most significant are the deaths of his wife and of his best friend, Matthew, Hugo’s older brother. Neither, of course, are Iain’s fault in any causal way: his wife died in the Blitz, but he blames himself for choosing that weekend to finish his tour, rather than traveling away from London with her, and Matthew dies in a final mission piloted by someone other than Iain while Iain is attending his wife’s funeral. Hugo’s story is bound up in both of these, as Leigh’s friend and a boy living in the shadow of an older brother: “He would never admit but he had been more upset the day Leigh Welles sailed away for the mainland than the day the telegram came consigning Matthew to oblivion.” Being given access to these guilts and shames to which the characters “would never admit” via the novel’s point of view amplifies the sluagh’s disquiet. The whole island must give over its obsession with death and loss—which includes making or repairing relationships—in order to heal and move forward, providing release for the sluagh.

Seckel’s work to manifest the island’s emotional obstacle in the sluagh, which are, in the world of the book, as tangible and intense as any highly focused murder of crows, is an effective one. The way corvids behave in the wild—their collective intelligence, curiosity, and problem-solving, coupled with beaks and claws in numbers—creates just enough realistic plausibility for the plot while the character relationships are established, and the stakes of the work are made clear. By avoiding any omniscient narration that might settle the speculative questions too soon, the novel allows the reader to move through the mystery of the sluagh beside Leigh and Iain under the same metaphorical and physical constraints that they experience. The result is a meaningful and satisfying conclusion in a story world drawn with exquisite care.