Home
»
Book Reviews
»
Poetry
»
“It all started when I began writing through masks”: An Interview with Tomás Q. Morín 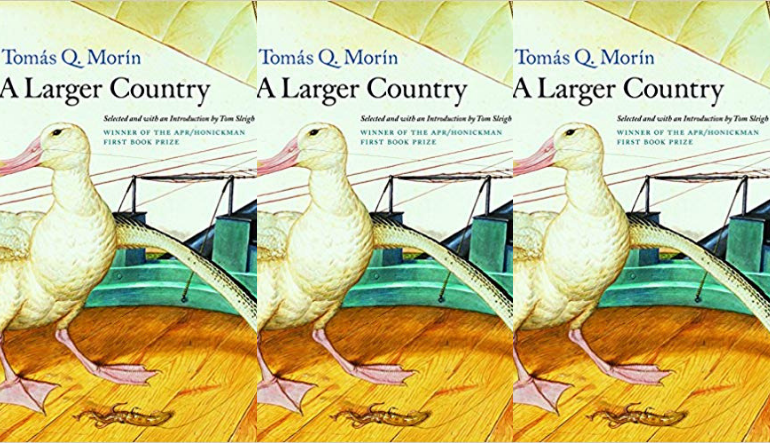 Tomás Q. Morín’s first book of poems, A Larger Country, won the APR/Honickman Prize and was runner-up for the PEN/Joyce Osterweil Award. It’s a collection that brings together a series of different times, places and characters (both historical and imagined) into a new world all its own, one that is both recognizable and decidedly strange. Tomás is also the co-editor, with Mari L’Esperance, of the anthology, Coming Close: 40 Essays on Philip Levine, and translator of The Heights of Macchu Picchu by Pablo Neruda. We caught up recently via email to discuss his work as a poet and translator, and how the two complement and contradict one another.

Matthew Thorburn: How did A Larger Country come together as a book? Would you talk a little about your process?

Tomás Q. Morín: In terms of the strangeness of the individual poems, it all started when I began writing through masks more after my MFA. Ai had been a visiting professor the year I graduated and her work had a huge influence on me in terms of what a poem could be. Suddenly, I felt I could use plot, character, and setting in ways I hadn’t before. Her and Philip Levine’s work exploded what I thought poetry had to look and sound like.

Putting the book together was tough because I didn’t really know what I was doing. Ordering the manuscript for me was about ordering the poems in a way that they spoke to one another and didn’t just sit there alone. Two smart friends read my manuscript and pointed out that the order wasn’t any good. I took their feedback and reworked the order so that all the poems were sitting at the same table enjoying each other’s company.

MT: You’re a translator as well as a poet—and a translator not of just anyone, but of Pablo Neruda. Does your work as a translator complement your own poetry? Do the two overlap for you, or feed each other?

TM: When I was translating The Heights of Macchu Picchu, I noticed a couple of things. The first was that writing my own long, extended-sentence poems actually helped me translate the ones that popped up in Neruda’s work. It’s not that my poems helped me untangle Neruda’s syntax, rather they helped me loosen them so I could get a clear idea of his meaning and then re-knot their syntax in English so that the reader would have the same twisted road to travel in our language that a Spanish reader would. Crawling into Neruda’s words as a translator also helped me feel like I could try and risk more in my own poems. He’s so bold when it comes to declarative emotional statements in a way that I feel many of us who write in English aren’t.

MT: Would you talk a little about your poem “Egg Ministry”? How did it start? And more generally, how does a poem start for you? What is your writing/revising process like?

TM: “Egg Ministry” began when I saw a sign with those very words at Mobile Loaves and Fishes in Austin, a place where I volunteered. People would drop off a couple dozen cartons of boiled eggs and MLF would distribute them to people who were hungry. When I saw that sign I thought, “What would a religion for chickens be like? And what would a preacher in that religion do?” Writing the poem was my attempt to answer that silly question, which is how most of my poems start.

I used to write a first draft quickly and then revise that for a few months before finishing a poem. The last few years, though, things have been different. For some reason I began revising line by line as I went along. So I wouldn’t move on to line 4 until 1-3 were set, and so on. Each time I would make a few changes, I’d resave the Word doc so as I was drafting/revising simultaneously, I’d end up with a bunch of files titled “Egg Ministry 4,” “Egg Ministry 5,” etc. By the time I reached the end of the poem, it would be almost done. “Egg Ministry” got up to 20 files. I’ve had some poems that generated 70+ files. I’ll usually set the poem aside for a few months and then go back to see if I still like it. If I do, then I’ll send it to friends I trust for their opinion before sending it out.

I have no idea why I write/revise in this way right now. I’m curious to see if it’ll stick or if there are more changes coming the road.

TM: Hmm, right now I’m finishing up a memoir. I never thought I could write a book of prose and then I did. I think I’m more surprised than my friends are. So finding an agent will be at the top of my list soon. Copper Canyon is publishing Patient Zero, my second book of poems, in spring of 2017. I’m overjoyed to be a part of the CC family.

TM: The Halo by C. Dale Young and The Woman Warrior by Maxine Hong Kingston. Both books are terrific, in the truest sense of that word.