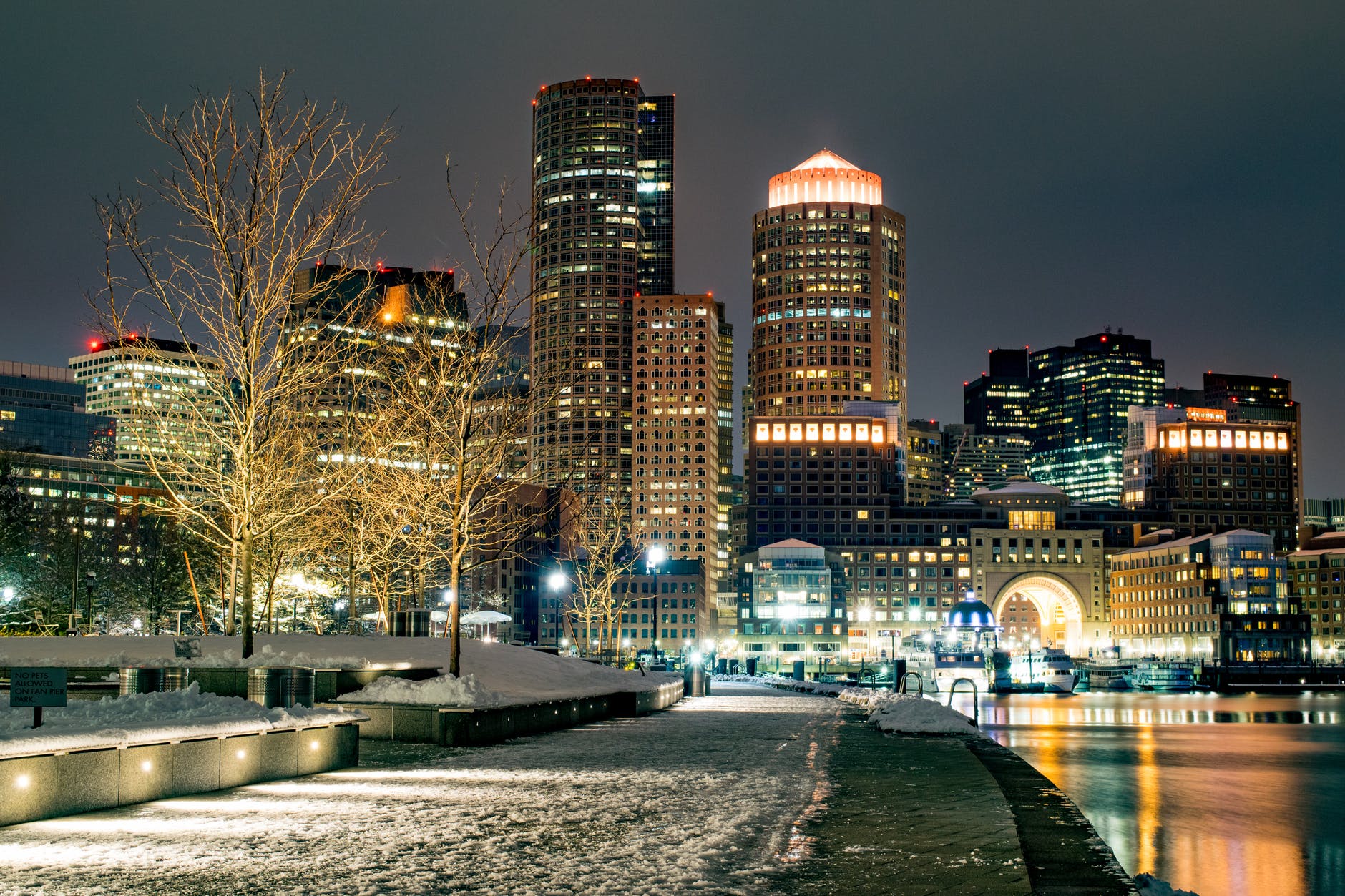 In 1972, Italo Calvino wrote that “Cities, like dreams, are made of desires and fears.” Nearly five decades later fear seems to have the upper hand. This year, my understanding of Boston, where I live, became less physical, less peopled. At the same time, my memories of the city grew urgent. I found myself turning to Calvino’s Invisible Cities, the short, philosophical travelogue presented within an old frame: Kublai Khan asks the merchant explorer Marco Polo to describe his empire to him, city by city. Kublai has never seen the empire in its entirety, and so he obsesses over possessing it. He wants to hold all of it in his mind at once. Calvino, disguised as Marco, mocks the impossibility of this wish by describing city after city, each of which seems more thought experiment than actual metropolis. In prose poem chapters organized into themes like “Cities & Desire,” “Cities & Signs,” and “Thin Cities,” Calvino probes the relationship between the real and the imagined, between a physical space and its inhabitants, between a city’s history and its identity. The book seems almost purpose-made for this moment. Marco Polo describes Kublai Kahn’s empire to him, and I sit in my bedroom trying to remember what the inside of a bar sounded like.

The visibility or invisibility of a city’s parts is always in flux, but this year it was dizzying. In March and April, Boston felt like a ghost town—its trains and streets emptied. Buildings were dark in the middle of the day. The students disappeared, and so did my neighbor, Gary, who didn’t have a home to hide in. Neighborhood fixtures were cleared out and boarded up. Then, in the summer, the streets filled again. First with scores of people protesting police-sanctioned murder, then with a few who decided that they really needed haircuts. Restaurants peeked open, and stayed open into the fall, even as cases rose and surpassed what they had been in spring. People started shopping for knickknacks again. Suddenly, we were in the middle of the second wave and what had turned invisible was the fact that we were still living through a pandemic.

“What’s the first thing you’re going to do,” my sibling asks me, “when you get the vaccine?” Eat ramen, I say. Go to the movie theater. But really the answer is that I have no idea. I can still see the city as it was and what I did there, but I can’t see the city as it will be.

Some of the first cities that Calvino describes fall under the “Cities & Signs” section theme. The city Tamara has “streets thick with signboards jutting from the walls.” These signs show people what is forbidden and what is allowed, which building goes with which activity. “Your gaze scans the streets as if they were written pages,” Calvino tells us, but in the end he says we leave without discovering the city itself. Later in the book, there comes a series of “Hidden Cities,” like Theodora, which exterminates its pests only to be overtaken by a new wave of dormant fauna: unicorns, griffons, sphinxes. Or Raissa, the city of sadness which contains a second, happy city, one that keeps itself unknown, even to itself. The signs and the hidden cities of the book point to each other. Every city revolves around what we gather together with our signs, and what we leave out.

In the spring, my husband and I put up printer paper signs in the lobby of our apartment building. We started a slack channel to keep in touch with everyone. Suddenly we discover a newed, miniature city that we had been a part of all along. We all send messages to each other: Is your heat also busted? Which store still has eggs? Can everyone pay rent? The landlord sends us all an email that boils down to, “If you need help paying rent: tough.” Should we try to start something? But none of us needs groceries, and nobody needs help paying for rent. The people in trouble are in a different hidden city; they can’t read our signs.

At first, Kublai wants to know his cities by what they sell and what they buy. These goods are emblems for him, by which he thinks he can map out his empire. But Marco ducks him, refusing that reduction. In Euphemia, Marco tells Kublai, you don’t just visit to buy and sell wares. More importantly, “memory is traded at every solstice and at every equinox.” Anastasia carries a more direct warning: “Such is the power, sometimes called malignant, sometimes benign, that . . . the treacherous city possesses; if for eight hours a day you work as a cutter of agate, onyx, chrysoprase, your labor which gives form to desire takes from desire its form, and you believe you are enjoying Anastasia wholly when you are only its slave.”

In Governor Charlie Baker’s speech after Thanksgiving, he avoided discussing a second lockdown for Massachusetts. Baker said of our mayors that “to a person, they all said that they see in their communities—all the time—people engaging in risky activity.” He insisted that instead the real threat to the community came from private gatherings, not restaurants or other businesses. We were asked to ignore, in other words, what cities do have the power to change: people forced to work in dangerous conditions, people crowding into restaurants. Instead, we should concentrate on the invisible that we are powerless over: the people hosting dinner parties.

There is a mathematical progression to the sections of Invisible Cities. You can plot this out if you want, or you can head over to the Wikipedia page, where someone has done it for you. What’s important is this: themes are introduced and trade off in a predictable order, but as one disappears another replaces it. The opening of the book is dominated by just a couple of clear themes—memory and desire—which repeat, then die off, giving way to a cacophony of other themes and vistas. Sometimes this onslaught is pleasurable and sometimes it’s overwhelming. The middle of the book is a constant experiment, like the lifecycle of a city itself. The last chapters are dominated, as the beginning was, by just two themes: “Hidden Cities” and “Continuous Cities.” A certain jaded quality enters Marco’s descriptions at this point. Trude, a Continuous City, combines this world-weariness with a kind of creeping horror. Every new city you visit becomes Trude, and only the airports change. Gone are the early cities of desire and memory. Despair has crept in and seems poised to stay.

Right before the last cycle of themes collapse on themselves, Kublai says to Marco, “At times, I feel your voice is reaching me from far away, while I am prisoner of a gaudy and unlivable present, where all forms of human society have reached an extreme of their cycle and there is no imagining what new forms they may assume. And I hear, from your voice, the invisible reasons which make cities live, through which perhaps, once dead, they will come to life again.”

I’m not sure what Calvino was thinking of when he wrote that, but all I could think of was us.

Before this year, I used to mourn every lost restaurant, even the ones that I never got around to visiting. Especially those ones, in fact. But this year, a point came where it felt like absolutely nothing. Losing places felt like tossing so many nail clippings, especially in comparison with the constant worry for family and friends who had to remain in full workplaces every day, through the uneasy summer and into the mounting anxiety of fall.

Finding a local spot that survived the spring and summer then became surprising, disorienting but nice—like uncovering an old sweater that I thought I’d left in another state. Someone tells me over Zoom that he used to live in Allston. “Do you go to Ringer Park?” he asks, “What about the Silhouette?” I answer in a voice from the past and tell him Yes! We talk about darts and the smoking deck and bathrooms better avoided. Afterward, I look it up, and the Silhouette turns out to have pulled through. It closed and reopened, but it’s possible that it will close again. It’s impossible, really, to say.

Early on, when all of Calvino’s cities still revolve around memory and desire, Marco describes Maurilia:

Maurilia’s inhabitants insist that their city has moved on to the next step in its life, but Calvino notes that in fact, this later Maurilia is not at all the same place as the earlier incarnation. Despite what its inhabitants believe, there is no continuity between the city that was and the city that lives on now, in the place where the old city had been built. Calvino writes that “the gods who live beneath names and above places have gone off without a word, and outsiders have settled in their place.” Does this happen to all cities? I want to ask. And How often? Calvino only answers: “Sometimes.” I suspect he means “Always, sooner or later.”

My husband and I look for a new apartment. Someone tells us that there are 10,000 unoccupied units now, vacated by students and others who’ve fled. Landlords are having a hell of a time filling them. Just for fun, we look at a wildly expensive neighborhood: the townhouses on Beacon Hill. I remember in middle school when I would ride the train to meet friends there for Halloween night. We went because you could get full-sized candy bars from the people who lived there, among the lanterns and cobblestones. “You want a king-sized Snickers, honey?” the rich women on their stoops would say. We called ourselves tricky, but they knew who we were all along. When the time came, they ran. “You want a three-bedroom apartment with a view of the park? Be my guest, honey. Take two.”

We find hundreds of abandoned apartments right away. We say My God, is this what it felt like to live in the past? To live like our parents did when they were young and things were easy? There are extra rooms, porches, and somehow untouchable neighborhoods have become open to us again. But this isn’t like the past at all; this is something else. This Boston we’re seeing now is ruled by new gods, chaotic ones, patrons of vicissitudes. I wait for the city I grew up in to come back, but that Boston is gone. A new one is growing up in its place.