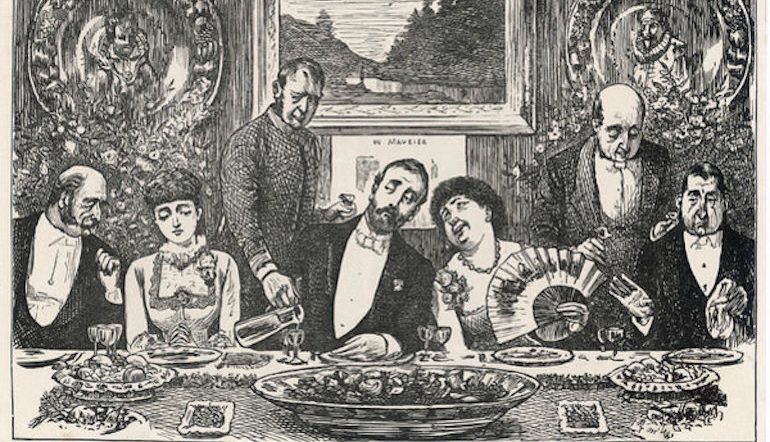 In fiction, it is never a good idea to attend a dinner party. We read dinner party stories to get messy: to watch passive characters shoved up against pushy ones, to get everybody drunk and hear what they’ve been keeping quiet about for years. These fictional parties almost always end in a revelation, and usually not a happy one. Rebecca Lee’s “Bobcat,” originally published as a chapbook and subsequently included in her 2013 collection, Bobcat and Other Stories, is one such story and so is James Joyce’s “The Dead,” the novella-length piece rounding out Dubliners, though the latter stretches the typical format.

There is a lot in common between the two stories: the party, of course, as well as each central character’s self-obsession and distraction, their doomed desire to appear interesting, and the anxieties of the performance of a dinner party. Both Gabriel in “The Dead” and the hostess narrator of “Bobcat” move from a preoccupation with watching and being seen by others to revelation, specifically the revelation that their spouses love someone else. Both stories end in gut punches, but differences in how their narratives are crafted—specifically, in how each narrator chooses to reframe their memories and life in light of their new perspective—ultimately lend each story a unique outlook.

James Joyce was a master of the internal pivot. His talent lay in capturing those breathless, infinitesimal moments we have all endured, wherein something we know is transformed into something we don’t. These moments of reframe are dizzying in both life and in literature, and “The Dead” is a master class in getting that dizziness onto the page. After leaving his aunt’s party in very high spirits, having given a successful speech, Gabriel Conroy is excited to get back to his hotel room with his wife. When he starts undressing, he’s shocked to look over and see his wife, Gretta, in tears. She confesses that a song at the party reminded her of a boy she had loved and loves still, a boy that Gabriel does not even know. Though a second realization follows (the boy is now dead and has been for years), the first is enough to throw his long marriage to Gretta into question: “Gabriel felt humiliated by the failure of his irony and by the evocation of this figure from the dead, a boy in the gasworks. While he had been full of memories of their secret life together, full of tenderness and joy and desire, she had been comparing him in her mind with another.”

Beyond this, the revelation causes him to reevaluate his own character. “A shameful consciousness of his own person assailed him. He saw himself as a ludicrous figure, acting as a pennyboy for his aunts, a nervous, well-meaning sentimentalist, orating to vulgarians and idealizing his own clownish lusts, the pitiable fatuous fellow he had caught a glimpse of in the mirror.” What happens in Gabriel’s mind at this moment is the quick undoing of every event that has come before—it is a delicious compression of the sprawl of the night and a swift rug-pulling out from under the great mass of security that has been built up in that sprawl. His good humor at the party and moving speech in praise of his hosts, the evidence of a warm character that Joyce has taken many pages to sketch, are erased and retraced into cold caricature: Gabriel has become a “pennyboy” for his aunts and a well-meaning sentimentalist. His love for his wife, his rekindled passion, is reduced to a “clownish lust.” It is a perfect rendering of the way in which a single piece of new information can instantaneously unseat a slew of long-held beliefs.

The immediately obvious difference between “The Dead” and “Bobcat” is the narration. The first-person narrator of “Bobcat” is a lawyer hosting a dinner party with her husband, a novelist. The guest list is peak dinner party story form, calculated to lay waste to somebody: there are the Donner-Nilsons, the husband of which is having an affair known to all except his wife; there’s the narrator’s husband’s editor, of whom the narrator is very jealous; there is the narrator’s best friend, hell-bent on telling Kitty Donner-Nilson about her husband’s infidelity; and then there is Susan, an intense memoirist whose near-fatal run-in with a bobcat gives the story its name. First-person narration can be suffocating, but in this case, it’s wonderfully gossipy. Lee relies on this voice-y perspective for her central misdirection: the narrator is so preoccupied with the things that could go wrong at her party (and with an argument she had with her husband right before it began) that she doesn’t see her revelation coming: this time in the form of her husband’s Other Love herself, in flesh and blood rather than memory, knocking at the door.

But, of course, “The Dead” relies on misdirection, too. As James Wood asserts in his book How Fiction Works, a close third-person narrator can be just as unreliable (and frequently more surprisingly so) as first-person ones. The load-bearing difference, then, between the two stories lies in the emotional fallout of each, what the narrator makes of the central reframe, around which their revelations are focused. While Gabriel turns inwards and (at first) back in time, the hostess of “Bobcat” casts our attention forward in time, with an air of stony resilience.

During Joyce’s revelation, Gabriel returns to many happy episodes from the evening and from his life, re-evaluating them. The one that really hurts the most is the first, when he realizes that the song that Gretta listened to at the party, the song that he had watched Gretta listen to and that had awakened bright memories and passion for his wife, had summoned a different love for her. In “Bobcat,” the double-take moment is one that occurs well before the party. While the present action is set in New York, there is a memory that the narrator returns to several times, of her honeymoon in Ireland. While there, the narrator once found her new husband crying in a field. She says, “I had asked him why, and when he didn’t answer, I hadn’t ever asked again, a fact that as it turns out I was mistakenly proud of.” Even before she knew that her husband was crying, however, when she was just walking towards him in the field, the narrator thinks not of her marriage but of her self-sufficiency: “As I picked my way across the rocks, a line from H.D., whom I hadn’t read since college, rose up to me ‘At least I have the flowers of myself.’” This quietly prepares us for the emotional conclusion of the story, which looks not backward over the narrator’s collapsing marriage but forward, to how she will survive it.

The stories leave us feeling very differently. In “The Dead,” we are first flung back, and a whole life feels undone, though it seems unlikely that the marriage will dissolve. In “Bobcat,” we are thrown forward after the revelation. When the husband’s lover shows up at the door, we are told that she would “stay and stay” and that the narrator’s “marriage would break apart within months.” Still, Lee ends her story on a commandment of hope: “Just crouch down, hold tight, there’s a little bit of pain for you, but not too much.” Even the placement of the two stories in their respective collections mirrors this effect: “Bobcat” is at the beginning of Lee’s eponymous book while “The Dead” comes at the very end of Dubliners. At first, it seems like Joyce will leave us, and Gabriel, stuck in the past. But at the very last moment, he lets us drift forward, too, a little further out than Lee does. Gabriel looks beyond pain and beyond recovery, into death. He decides that “the time had come for him to set out on his journey westward,” and he means to cast his thoughts towards death before his body. Just as snow is general all over Ireland, the demise of what we’ve known falls upon all the living.