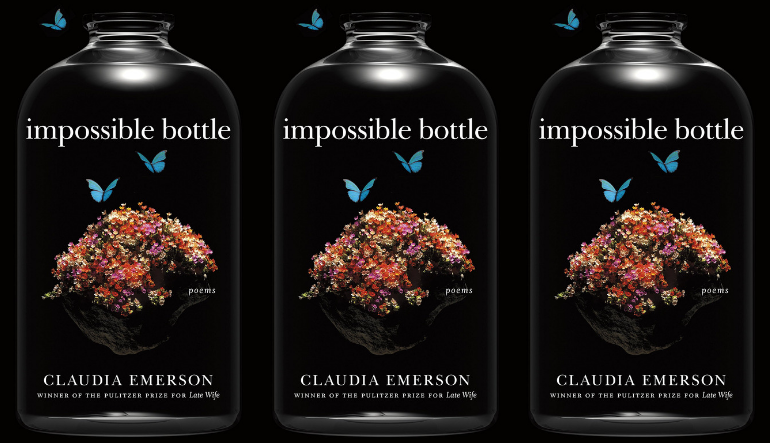 I take the five students of my poetry micro-workshop outside to discuss Claudia Emerson’s latest collection Impossible Bottle. As we sit in the sun, bending over the brilliant bright book pages, a student points to the poem “Metastasis: Web” and volunteers to read it aloud before our analysis of the author’s craft choices. You—join us. Lend your voice to the poem too. It’s meant for the ear.

no mistake   this web’s expanse
near invisible

entrance to it   the wren’s
discovery   the accident

the web become larder   the spider
grocer   its lovely apron

filament   parcels of the air
asleep   and bound   and you

approve   somehow of the commerce
as though   agreed to

the ease of deft return   the joy
such   swift   excision

Thank you. How quickly did you read the poem? Did you pause in the middle of lines? Where? Did you read through the lines for the syntax, as we’re taught? Or did you end every line, every break as if it’s a question? (Poet voice, ahem.)

“What do you notice immediately?” I ask, and first, having just heard the poem aloud, they say the sounds—the es hiss at the opening, the chiming vowels of the second half (“air / asleep,” “you // approve   somehow”—and then, they say, form. Couplets, no punctuation. And those gaps in the lines! “Why are there gaps?” one students says. “I noticed it throughout the book.”

And I’m so used to this question now, as there hasn’t been a single poetry class I’ve taught recently without a poem that contains those gaps, the visual caesuras (or, as I sometimes call them, in-line white space). In general, I propose a few possibilities, some of which are motivations I’ve had for using the visual caesuras in my own poems.

The author wants to suggest an absence or loss of something or someone, or something isn’t being said.

(Nate Marshall, “Granddaddy was the neighborhood”)

Ruin: girl’s ghost, her train. In my cave swallows
spit from bright mouths, making.                     My ear
holds something lush like court in its golden church
as I do remember holding you. I remember every

The author parses out the syntax or chunks together ideas/phrases/units of meaning without the totalitarian rule of punctuation.

out of dust   Bred longhorns and bullshit   She could shoot   but she didn’t
She said   Sing it baby   Please, please— I got down on my knees

(Vievee Francis, “Say It, Say It Anyway You Can”)

The author wants to control the cadence, pace, and sound of the poem, so that the reader is stalled or, conversely, sped up by the white space, or the author like a composer of wind instruments establishes an allegiance to breath, or the author illuminates internal rhymes/chimes/sounds across lines through their visual alignment. This one is a little harder to demonstrate quickly, but here are a few examples for which the writers might be said to use these strategies in their employment of visual caesuras.

i could sense      the dear worms
through    the grillwork fence,
twists & coils   of flexi-script, remaking
the soil    by resisting it    …

All of the the reasons for having a visual caesura are also reasons one might include a line break, and so the visual caesura might cynically be said to be like having a line break and eating it too. With the Emerson poem, I feel as if I could make a good case for almost all of these approaches. I think most poets don’t sit down trying to unpack the logic of it; it’s an intuitive choice, a kind of I-don’t-know-why-but-I-must decision. But then a student says, “Okay, I might be wrong about this, but could it be that the white space is there more to draw someone in, kind of like it’s a chasm one”—perhaps the eye, I think—“falls into?”

L’appel du Vide. Literally, the call of the void. More generally, it refers to that urge—that shoulder devil voice—telling one jump on the edge of a great gulf, cliff, or highrise. Perhaps then, the visual caesura likewise functions to remind us of some instinctual primacy, the informality of the body, the drama of heights, of depths, of falling. It’s that freefall drop demanding us to ask, Where will I land? Will I survive this leap? Is there a safety net below?

The idea that one can perhaps capture or, rather, render absence, breath, the unsaid is perhaps the reason why the literary community has also become increasingly interested in erasure. Erasure, either by choice or happenstance, offers us a direct engagement with loss, the loss of the text itself. Erasures relies on both what is and isn’t said, as well as its visual revelaton to create meaning for us. We’re as much drawn by the text that appears as the text that doesn’t appear. Solmaz Sharif, in discussing erasure as both a function of both poetry and the state (think declassified and redacted government documents), writes, “the proliferation of erasure as a poetic tactic in the United States is happening alongside a proliferation of our awareness of it as a state tactic . . . when it comes to erasure, this very form of palimpsest, the ghost is not only death or the degradations of time—the ghost is the state itself.” What is blacked out or covered over is what is perhaps most revealing, even dangerous.

Last month, I created an erasure text from Calvino’s Invisible Cities I called Sap, a shortened form of Eusapia, one of the cities of the dead. For me, the void in the text is both what has been blacked out and what hasn’t been blacked out. The words feel as much like empty space as the black paint. Those emptinesses create a space for us to fall into.