Home
»
Writing
»
Writing Advice
»
Letter to myself: On fatherhood and poems 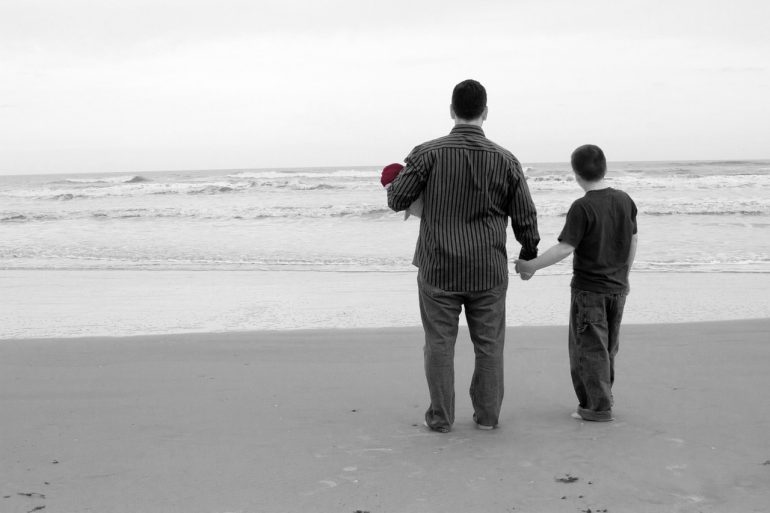 A published letter is a strange act. It’s like a whisper made into a loudspeaker. It’s a secret note the town’s tacked onto the city hall bulletin board after the carrier pigeon nosedived into the public square. It’s intimacy externalized. Some letters seem to speak to no one at all, but the best letters, though they’re addressed to another, make us each feel touched: think of Baldwin’s letter to his nephew. Or Kazim Ali’s to Aimee Nezhukumatathil. Or, right here on the blog, Megan Mayhew Bergman’s lovely one to her daughters urging them not to “be good.” You overheard it. You’re pilfering the epistolary form now. A self-addressed published letter is strangest of all, but you and I could use a speaking-to.

Look around on Facebook: there’s a mother’s hands shaping a heart on her pregnant belly. There is a sonogram of a fetus in its grainy uterine hammock. There, an incipient sibling feigning shock at the chalkboarded birth announcement. A little tag around a baby’s little toe, both parents’ lips mammoth atop its head. A year gone by at breakneck speed. Pleas for the baby to stop growing so fast. Admit it, you’re thinking about fatherhood—and admit it, you’re scared, even though you’ve always had the desire, growing stronger lately, to nurture something small. You envy the midwife toad—admit it—who carries the eggs on his back like a shipment of tiny moons. You wish you had the pluck of the male penguin, or at least the task of the carrier pigeon, the stork’s honor of delivering a living missive. You feel a reverence for all parents: they’ve survived. They seem in on a secret, laughing clandestinely at their esoterica without you. Even the expectant parent is lucky for feeling a baffling wonder you can only guess at.

You don’t yet know what it’s like, but you know enough to not expect the rom-com version of fatherhood, where the baby comes out clean and unswollen and love is immediate and unadulterated and devoid of fright. Don’t trust the Facebook version either, which stops the smiley video moments before the tantrum starts.

Don’t only want daughters. Your niece is an angel, but this does not make all daughters angelic. Don’t only want sons. Whatever is given to you will be what you want. If you have a son, don’t envision him onto some televised championship podium; don’t try to mold him into the athlete you wish you’d become. No. If he uses his baseball bat as a wand, let him. Celebrate it. If he uses a wand as a weapon, let him (though this may call for a light chat about pacifist alternatives), and don’t chalk this up to a failure. Don’t only call him “buddy.” He should know his heart is sweet, too. Be affectionate. Let him cry: toughness, tell him, is how he recovers from tears, not how he hides them. The same applies for your daughter. Don’t only call her “pretty.”

Learn from those around you: Galway Kinnell, Kevin Young, Mark Strand, Thomas Lux, and Craig Morgan Teicher, among all the others whose poems you’ve never read and never will, who fight themselves at night because their baby is sleeping in its crib and has never harmed anything and all the father can think of is a trifling image that doesn’t come close. Don’t let this stop you. In fact, you want to write poems and make children because they’ve been done before. Dammit, you deserve a stab at such heart-enlargement, to try your hand at changing a world (your own will do). Everything has been felt already, but not by you. Tell this to your child, as well. They deserve the shock and awe of living.

But living requires cautionary letters to be written to daughters and nephews. At some point your child should know there are people you’ve met who want children desperately but don’t want to be fathers for fear of the cruel world. (Weldon Kees was not alone in his final confession in “For My Daughter”: “These speculations sour in the sun. / I have no daughter. I desire none.”) There are people who, with a preemptive sense of mourning, refuse to bring another target into a place that “relishes the sting / Of others’ agony.” Make your child think about this, but not punitively. Tell them they’re lucky to be alive, but that how safe others feel is up to the infinitesimal gestures we make in the un-makeupped moments, beyond surveillance, every day.

Giving yourself advice about your child who doesn’t yet exist takes the same hallucinatory logic as writing a poem: each is a speaking into your own ear in the hope that an imaginary other’s will one day be poised toward it. What will catch or stick or turn resplendent for them is beyond your control. The poems you write that swear to look outward always end up looking in; here you’ve skipped the swearing and got right to the business of addressing yourself. When you do have children, look back at this letter and scold yourself for your commencement-speech idealism. Marvel at how little you knew, and know, how you could never predict the altered gravity of loving them. Then ask your parents to babysit, because they’re already begging you.