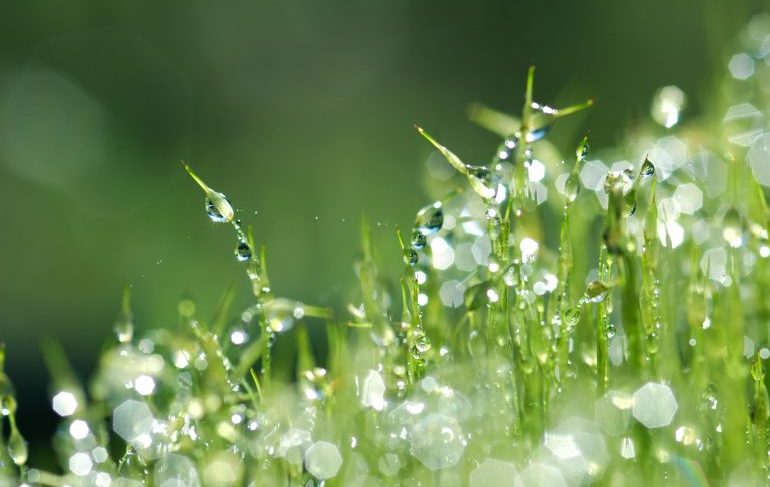 W.S. Merwin loves mornings. In his more than fifty books, the former US Poet Laureate and winner of the Pulitzer Prize depicts morning’s beauty in mist, light, shadow, and birdsong. As Merwin captures these moments of nature’s awakening, he reveals the depths of his own awakenings too.

Mornings are a time of pleasure and discovery throughout Merwin’s poetry. In “Theft of Morning” he writes of listening to rain dripping from the trees at daybreak while watching palm flowers open, “pink coral in midair.” Mornings also bring freedom, as in “Beginners,” where he writes, “the day we wake to is our own.” Both of these poems appear in his 2014 collection, The Moon Before Morning.

“I love to get up well before daybreak, before the birds are awake,” Merwin told Bill Moyers of PBS in a 2009 interview. He went on to describe his early mornings listening to the sounds of the valley at his Maui home in the palm forest that he and his late wife, Paula, planted. The documentary Even Though the Whole World is Burning follows the poet through his morning rituals of reflection—tea, reading, writing, and looking out at the trees—that he continued into his tenth decade (Merwin turned ninety-one last month).

Mornings feature prominently in Merwin’s latest collection released in 2016, Garden Time, which he wrote with the help of his wife as he was losing his eyesight. A sense of loss, both past and impending, juxtaposes the imagery of daybreak’s sense of possibility. He asks in the opening lines of the first poem, “The Morning”:

In “Summer Sky,” another poem from Garden Time, Merwin writes, “I have been coming to this morning light since the day I was born.” It does seem that he has been reckoning his whole life with the emotions and memories that dawn carries back to him. Consider the poem “Rain Light,” from one of his earlier collections, The Shadow of Sirius (2008), in which he evokes the memory of his mother in the fading stars: “All day the stars watch from long ago / my mother said I am going now / when you are alone you will be all right.”

Just as morning signals the fading of stars and the passage of night into sunlight, so too does it bring long shadows, another image of darkness in Merwin’s morning poems. This darkness, he hints, is where the light finds its contours and meaning. “Everything will leave us except the shadows,” he writes in “The Wings of Daylight” (Garden Time), “but the shadows carry the whole story / at first daybreak they open their long wings.”

In Merwin’s mornings, besides the evocations of beauty and loss, there is a recognition, or insistence, that this is a time like no other to be present in the world and to live deliberately. Never is this clearer than in his poem “Choosing” from The Moon Before Morning, in which he laments the despair of a friend who “chose not to be” and declares, “better / the sound of the rain / better the brightness falling / better the day / choosing to be morning.”

Indeed, Merwin often writes of mornings as “the only time,” as he does in “Rain at Daybreak” (“there is no other voice or other time”), “Early One Morning” (“Memory alone is awake with me / knowing that this may be the only time”) and “Autumn Equinox” (“This is our time our season is now / the only time and you must wake and begin / to remember and to know who you are”), all appearing in Garden Time. In a number of these recent poems, one can feel an urgency in the poet to seize the moment as if it is his last, in order to appreciate its unique gift.

On the other hand, some of Merwin’s morning poems push toward a measure of peace and acceptance of time’s passing. There is less urgency and more tranquility in “Old Man at Home Alone in the Morning” (also from Garden Time). “I am the morning,” he writes, “in which the autumn leaves have no question / as the breeze passes through them and is gone.” And in “Living with the News,” though he writes of grief, he concludes: “our only hope is to be the daylight.”

It was in his collection The Rain in the Trees (1988), in the poem called “Place,” that Merwin wrote: “On the last day of the world / I would want to plant a tree.” He explained to Bill Moyers that the idea behind this poem was not simply about hope but rather a way of relating to and being in the world. I think there is a connection between this and the poet’s tenderness for mornings. It’s the notion that we are more fully alive and with purpose when we are engaged in the world, whether by contributing to it or by bearing witness to its mystery.

“Poetry is a way of looking at the world for the first time,” Merwin said once. I think this too gets at his way of relating to the world, and why mornings hold so much meaning to him as he watches the world transform into newness each day. Merwin tends to his sacred early hours as he tends to his palm gardens, his poetry, and his life—with unceasing wonder and astonishment. Morning brings not a promise but an invitation, he seems to be telling us, if only we can awaken to see it for the first time.

Tags:Garden Time, The Moon Before Morning, The Rain in the Trees, The Shadow of Sirius, W. S. Merwin