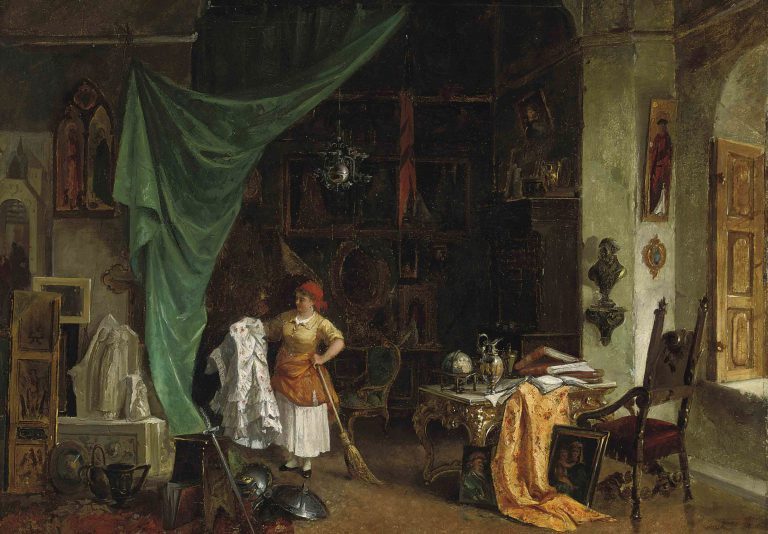 Nicholson Baker’s longform essay “Lumber,” included in his 1996 collection, The Size of Thoughts, is an extraordinary work. Out of sheer curiosity and love of research, Baker does a deep dive into the history of a single phrase—lumber room—following just about every rabbit hole he can find to trace its use as a metaphor. He runs after every dictionary reference, every cited example, and every allusion to literary uses of lumber room and lumber, beginning with James Boswell’s The Life of Samuel Johnson (1791), up through Laurence Sterne, Johann Wolfgang von Goethe, Charles Dickens, and Sherlock Holmes. He makes deductions about how each author might have encountered the phrase in their own reading. The essay contains, by my count, 132 footnotes; Baker’s debut novel, The Mezzanine, which was published eight years before David Foster Wallace’s Infinite Jest—the queen mother of show-offy footnoted discursion—contains about 50. “Lumber” is in many ways thus an expert demonstration of how humans think and learn.

In affluent homes, the lumber room was the room in a faraway part of the house where you stored the extra furniture you weren’t using. As Baker notes at the beginning of “Lumber,” the term has been used as a metaphor for thought and the mind since the late seventeenth century. It takes little imagination to grasp the metaphor—think of the times you might have referred to the “attic” of your brain, or made a reference to cobwebs, when trying to explain how you knew some arcane fact. Most knowledge is indeed lumber—we store it away, sometimes never to be used, and it often weighs us down. We might now call it trivia, or esoterica—two words that lack the weight of burden found in the heft of lumber.

After pinning the map with examples from Boswell and Conan Doyle, Baker leafs back to “the one really famous piece of lumber we have,” coming from Alexander Pope’s An Essay on Criticism (1711):

The Bookful Blockhead, ignorantly read
With Loads of Learned Lumber in his Head.

From here, an adventure of historical forensics takes place as Baker tries to identify where Pope might have learned the phrase, or if he came up with it out of whole cloth. As “Lumber” came to us before Google, much of his research utilizes the hot 90s indexing technology, CD-ROM storehouses like Chadwyck-Healey’s English Poetry Database (“the most significant development in literary scholarship since xerography”), but he is just as willing to devote space in “Lumber” to lamenting the software’s insufficiencies. The rest of what he needs he gathers by piecemeal methods. That’s where the fun is.

I have worked as a lexicographer for over 20 years. The work is a paradox of stillness and fluidity: words are constantly shifting in meaning, and yet the lexicographer’s job is to capture that meaning like a photograph in time, even as meaning continues to change after you get the definition down. During the high print era of dictionaries, it was said throughout the industry that the moment you put out a new dictionary, it became obsolete. (This is still the case with online dictionaries, in a way.)

To determine a word’s meaning, you collect examples of its use and then try to distill what those examples have in common without being too general (to define is literally to identify where the boundaries lie). But if you really wanted to know everything that went into the story of a word, you wouldn’t look just for a definition; you would do a grand-scale version of what a historical dictionary like the OED attempts to do, which is cite as many uses as you could and arrange them into a timeline. Then you could see every expansion, every deviation of meaning, every interpretation and misinterpretation, and every daring stretch—a game of telephone in which what enters the language at one point in history turns out altered beyond recognition centuries later.

The work of a lexicographer doesn’t leave room for such connections, so it’s a thrill to witness anyone make the attempt. Imagine drawing a Family Circus-style map tracing everywhere you have ever walked in your lifetime—a Strava active since you took your first toddler steps. “Lumber” is like doing that, for a word.

People rarely think about their vocabularies, yet our arsenals grow every day. They also atrophy and vanish with disuse—have you ever read something you wrote in your past, from an old term paper or journal, and found a word or phrase that you can’t imagine using today? How does one encounter a term like lumber room in their reading, come to understand its value as a metaphor, and then know to pull it out for their own use? It starts with recognizing the notion behind the metaphor—in this case, the dead weight of knowledge—as familiar. The brain signals to the writer or speaker that there is a term nestled in our mental junk drawers that feels right for the occasion. To be able to access that at the right moment is a talent only some people have.

If you hadn’t already known what a lumber room was, you might reasonably picture a room filled with our modern idea of lumber—wooden boards lying flat. But there are older senses of lumber that have nothing to do with wood. Some dictionaries ascribe a connection of lumber to Lombard, referring to a type of money lending that originated in Lombardy, Italy in the Middle Ages, in which lenders, barred from charging interest by the Church, essentially operated like pawnbrokers. Their shops became storehouses for the items held as collateral, some of which never found its way back home. Lumber just wears its heaviness in every sense.

Baker digs some more and finds another use by Pope, in an early version of his Dunciad, first published in 1728:

He roll’d his eyes, that witness’d huge dismay,
Where yet unpawn’d much learned lumber lay.

The Dunciad, if you aren’t familiar with it, is an 18th-century version of a diss track. The target of the diss is Lewis Theobald, an editor whose 1726 Shakespeare Restored was produced and seemingly motivated by errors in an earlier variorum produced by Pope. The full title of Theobald’s edition pulls no punches about this: Shakespeare Restored, or a Specimen of the many Errors as well Committed as Unamended by Mr Pope in his late edition of this poet; designed not only to correct the said Edition, but to restore the true Reading of Shakespeare in all the Editions ever published. (Just snitch-tag the guy next time, Lewis.)

Pope’s use in the Dunciad, Baker notes, is remarkable for its calling back to lumber’s path through the business of pawnbrokers. Additionally, the name Lombard is thought to be an alteration of the words long beard, for the facial hair said to be a regular feature of people from that region. One can now draw a rather tight line from beards to pawn shops to wood.

“Lumber” is a celebration not just of linguistic legacy; it also celebrates how knowledge can be stretched, extended, and just how much can be extracted about the most particular of subjects. In this way, the essay picks up on the mental dynamism shown off by The Mezzanine. That book, while structured as a work of fiction, is a paean to the vastness and rapidity of thought, as we follow a man returning from lunch-hour errands as he rides an escalator to his office building’s second floor. In those few narrative seconds, we are provided discourses on all manner of minor subjects that flash into his brain as he proceeds: the design of shoelaces and plastic drinking straws; the consistent way that light reflects off a moving object; the satisfying mechanics of vending machines. While for most of us such thoughts are fleeting, the energy more in the question than the answer, The Mezzanine, with its rabbit-hole structure, allows Baker (through his nominal character Howie) to offer deep meditations about all of these commonplace things, about which it turns out there is an astonishingly great deal to say.

Baker has been pegged by some critics—at least, those who care enough to peg him at all—as a bit of a harmless crank and occasional winky perv. His later works seem prompted by a sense of outrage and frustration at systems and legacies being deliberately obfuscated, sabotaged, and made unnecessarily opaque. He has used fiction to deliberate the morality of assassinating a real-life president (Checkpoint, 2004) and nonfiction to argue against the morality of U.S. involvement in World War II (Human Smoke: The Beginnings of World War II, the End of Civilization, 2008). Most recently, he has written about working as a substitute teacher (Substitute: Going to School with a Thousand Kids, 2016) and his struggles to obtain classified government documents to see if the U.S. used bioweapons during the Korean War (Baseless, 2020).

All of these projects, however thankless or futile, tie together in one reasonable-sounding principle—the right of humans to learn and know things and not have access to information taken away. He has written an encomium to Wikipedia, which he calls “just an incredible thing” and “idiosyncratic, careful, messy, funny, shocking, and full of simmering controversies,” and a similarly effusive takedown of Amazon’s Kindle (in its early days) for its functional limitations. Another long essay in The Size of Thoughts, “Discards,” condemns libraries for doing away with card catalogs in favor of digital indexing; Baker’s 2001 book, Double Fold, similarly goes after libraries for throwing away newspaper archives in favor of microfilm. These arguments may sound like those of someone who wishes for time to stand still, but there’s a value that’s revealed: to Baker, all information—even the esoterica scrawled on indexing cards, or the ads that serendipitously ran alongside a news article from 60 years ago—matters, and it should not have to justify itself by attaining some agreed-upon (by whom?) level of significance. Even the medium is information, and if you want to know it, it’s important. The more we allow to be destroyed, the more impossible it becomes to take on a project that indulges our curiosity—like the one Baker attempts in “Lumber.”

In the quarter century since “Lumber” was published, learning has become both easier and harder. It was only two years after the essay appeared that Google was launched. To know things with the depth that they can be known requires patience, and we are anything but patient now. To cater to that impatience, we let the internet remember a lot of things for us, but the internet—gatekept by entrepreneurs who have claimed that information should be free—crawls with paywalls, deepfakes, bad-faith saboteurs, and people who are just plain wrong, trusting data to follow a Darwinian survival code in which the truth is supposed to rise like cream to the top. And unlike a library or even a government agency, the internet is not an institution—there is no one behind the glass door who can be held accountable when it fails to do what it is asked. Instead, it expects you to get distracted and move along. “Lumber” is about the joy of one man doing the work of discovery and learning, and the fact that it comes from a time before the lazy chaos of the internet might be the most enjoyable thing about it.