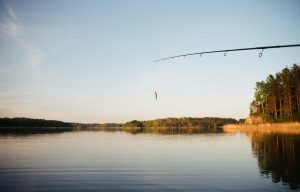 Set in Montana in the period after World War I, A River Runs Through It has the straightforward ruggedness and Emersonian approach to self-sufficiency you’d expect in a story located in the rough and tumble American West. From a thematic perspective, A River Runs Through It is about fishing in the same way All the King’s Men is about politics: a device by which the author can get at larger ideas. Maclean is explicit about his themes—celebrating outdoor life, family, and how those we love elude our understanding.

Though a brief 112 pages, and written in simple yet evocative language, A River Runs Through It reveals a new depth with every encounter, leading me to believe Maclean may have gotten at something even more profound than what he intended. Much of what Maclean writes is shaped by memory, more specifically by how, not what, he has remembered.

This seems to be an obvious point in a book where the narrator is looking back on his younger self. Yet all books rely on the agreement that exists between reader and writer. Here, the writer is recapitulating events, relaying something experienced or heard. Since A River Runs Through It is considered a novel, only Maclean knows how much of the book is based on real events. Furthermore, only he knows how accurate his memory of decades-old incidents and conversations. Or does he?

As readers, we employ strategies to assess the reliability of the narrator with the acute awareness that our memories are flawed. We can recall with precision a conversation we had 10 years ago, but can’t remember what we had for lunch last Tuesday. Who among us hasn’t believed that events happened a certain way, only to find out later we were wrong?

The past doesn’t change, but how we perceive it does. Maclean is looking back at events that happened 40 years ago not for the sake of nostalgia but because he knows that how he thought of them then is different from how he thinks of them now. In exploring how he’s changed in the intervening years, the past becomes a living breathing thing, like the fish the Maclean brothers are chasing on the Big Blackfoot River. Any person who’s reflected on life can appreciate this project.

Intellectually, we know Maclean can’t possibly remember what he was thinking on a certain afternoon fishing with his brother Paul and his brother-in-law Neal. The detail he goes into about flies, the specifics of a landscape, the logistics of the day are important, but as a reader, I accept that they may be “true” if not entirely accurate. What I’m most interested in—and I would argue what Maclean is most interested in—is the essence of Norman’s feelings toward Paul, and to a lesser extent his brother-in-law, Neal. The reason they ring true is because I empathize with Norman’s struggles.

Maclean uses the fish stories to lure us in. Anyone who has ever dropped a line in water with the hope that a fish will tug on it recognizes the storytelling possibilities in that act. The action begins once the fish engages with the conclusion of the ensuing drama remains in doubt until the very end. Maclean, a lifetime angler, knows this framework better than anyone and when juxtaposed with the drama between family members, his metaphor becomes clear. Visually, the book also benefits from the fact that it was turned into a gorgeously shot movie directed by Robert Redford and starring a young Brad Pitt.

The key scene in A River Runs Through It occurs when the narrator goes fishing with Paul on a hot afternoon. On the river, Maclean believes an offer of help will be better received and have a better chance of being accepted than through a confrontation at their parents’ home, for example. But when the offer is made, Paul politely but firmly changes the subject.

Compounding Maclean’s frustration on the day is that his wife has forced her self-satisfied brother Neal on his and Paul’s fishing trip because she believes the brothers, Norman mainly, can help give her brother a sense of direction. Norman dislikes Neal but offers to help anyway, though it’s probably to no useful end. When he discusses this problem with Paul, Paul says “Maybe what he likes is somebody trying to help him.”

Paul could very well be talking about himself, a possibility that Norman recognizes. One of the great ironies is that neither Norman nor his wife can help the brother they love. Perhaps it is one of those unconscious yearnings that brings people together.

When we recall people who are gone, permanently or otherwise, we piece together events and conversations to understand them or, more often, to try. We do this because the people who we remember and the experiences we had with them, make up who we are. Remembering them is an act of love, and finally, an attempt to make sense of our own lives.

That’s why MacLean wrote this book. He’s still grappling with Paul much as he would a brook trout toying with his fly. Though he’s the older brother, he is deferential to Paul, who everyone agrees has been touched by a genius of the tortured kind. He seems to have achieved something approaching peace when, quoting his father he writes:

For it is true we can seldom help those closest to us. Either we don’t know what part of ourselves to give or, more often than not, the part we have to give is not wanted. And so it is those we live with and should know who elude us. But we can still love them—we can love completely without complete understanding.

A fish can be as evasive as those we love. For Norman, Paul is the one that got away.