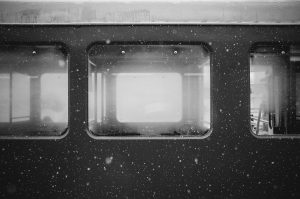 According to S.S. VanDine, the author of the popular Philo Vance detective novels of the 1920s and ‘30s, there are absolute rules for writing a murder mystery. Essentially, it boils down to a few key points: no romance, no butler-murderers, no rambling descriptions of scenery, food, clothes or drawing rooms, always have a dead body in plain view, and most importantly let the reader help the hero-detective solve the crime.

Legendary mystery writer Agatha Christie followed all these rules, added a few of her own, and went on to become one of the most successful writers in the world. Christie scholars lovingly describe her notebooks and her methods for sketching out and solving her crimes. Murder on the Orient Express, considered by many to be one of her most iconic mysteries has everything a mystery lover could want, a exotic European locale, a collection of international suspects, a very, very dead body, clues aplenty and an idiosyncratic detective to help armchair sleuths put all the pieces together in a neat package.

In Murder on the Orient Express we are told that in the dead of winter, when the novel takes place, nobody travels from Istanbul to Calais on the Orient Express. So, what better time to plot the elaborate murder of a supremely evil American businessman known to be traveling on that train. Everything is carefully plotted down to the last detail. What could possibly go wrong?

Well, for starters, renowned Belgian detective Hercule Poirot could unexpectedly board that same train and settle in for the night in the vacant first class compartment right next to the murder victim. Then the train gets stuck in a snow drift, giving Poirot plenty of time to gather clues, interview each of the passenger-suspects aboard the train and reveal the killer once everyone is gathered in the beautifully appointed lounge car.

Agatha Christie may not have cared for her strange little Belgian detective, but even she had to admire the fact he always got the job done, as he does here on the Orient Express.

Whenever anyone attempts to bring this book to the screen (there have been at least four attempts so far including the most recent Kenneth Branagh version now playing in theaters) there’s always some attempt to make Poirot a little more fun. But fun, outside of finding clues and chasing killers, is not one of VanDine’s rules for mystery writers.

In Branagh’s film version, Poirot (played by Branagh himself) performs some top of the train James Bond-type stunts and takes the passengers off the train into a CGI wonderland of sweeping scenery and snow-covered peaks. It’s an understandable impulse given modern technology, but it deserves a big thumbs down. Mystery fans really just want to follow Poirot around the train, watching him tally up all the ways the murderer failed to commit the perfect crime.

Murder on the Orient Express is what is sometimes called a “closet novel.” All the action takes place in three luxury cars on the celebrated train. Other Christie novels take place in similar isolated places where rich and mysterious people tend to congregate, such as isolated country houses (And Then There Were None) or cruise ships (Death on the Nile.) With no place to run and no place to hide, we have all the possible suspects right at hand nervously lighting cigarettes and suspiciously eyeing each other as well as a wealth of clues just waiting for the practiced eye of Poirot to find and analyze.

The first part of the novel sets up the story while the second part is a sequence of interviews conducted with each traveller/suspect from the aging Russian aristocrat to the victim’s valet. Each has an airtight alibi and their stories combine to create a tour de force collection of unreliable narrators. Each has an answer to every question. Each remembers what time it was when an incident occurred. Nobody seems to know the deceased. Not even when he is revealed by Poirot (after a stunning bit of MacGyver-esqe showmanship with a pair of hat boxes and a can of sterno) to be the kidnapper and murderer of five year old Daisy Armstrong, a fictional high profile tabloid drama (loosely based on the Lindbergh kidnapping) that shocked America and the world.

Poirot knows—and so do readers—that the murderer is definitely on the train. Another key rule of murder mysteries is no minor characters dropping in to stab the victim and vanish into the night. This means somebody is lying. Surely, the murderer has to be one of these 12 people—or could it have been a mysterious thirteenth who fled out the window of the dead man’s room? Poirot spends the third part of the novel making charts and lists of evidence at hand and at the end comes not just to one conclusion but two entirely different and unexpected ones.

Closet mysteries build suspense and bring the focus in on the novel’s primary goal: Whodunnit. Despite the opulent setting on what is still one of the world’s luxurious trains, Christie focuses on dialogue, not the scenery. There is no time to enjoy scenery when a man is dead after having been stabbed twelve times. But the odds that an average reader can determine the real killer are almost nil. In an excellent profile of Christie in the New Yorker, Joan Acocella says she read 66 Christie novels and figured out who did it exactly twice. She also suspects this is ‘a fairly typical record.’ She also offers a brief explanation as to why her average might be so low:

But, in truth, the guessing that we are asked to do is almost fruitless, because the solution to the mystery typically involves a fantastic amount of background material that we’re not privy to until the end of the book, when the detective shares it with us. Christie’s novels crawl with impostors. Letty is not really Letty; she’s Lotty, the sister of Letty. And Hattie isn’t Hattie. She’s a piece of trash from Trieste, who, with her husband, Sir George, killed Hattie (who was also married to him) and assumed her identity. The investigator digs up this material but doesn’t tell anyone till the end.

Christie’s novels, and murder mysteries in general, are puzzles that readers enjoy trying to unravel on long airplane rides or cozy Sunday afternoons curled up in a favorite chair with a favorite beverage. Filmed versions of mystery novels will always try to pack in other details, invent other storylines or pump up the volume in some other way to take advantage of the medium. Whether the result is good or bad, it’s not quite what the authors, or the mystery fan, had in mind. Sometimes all readers need is a rainy afternoon stuck in a dining car with a dead body, 12 would be murders and an internationally known detective to have a really good time.