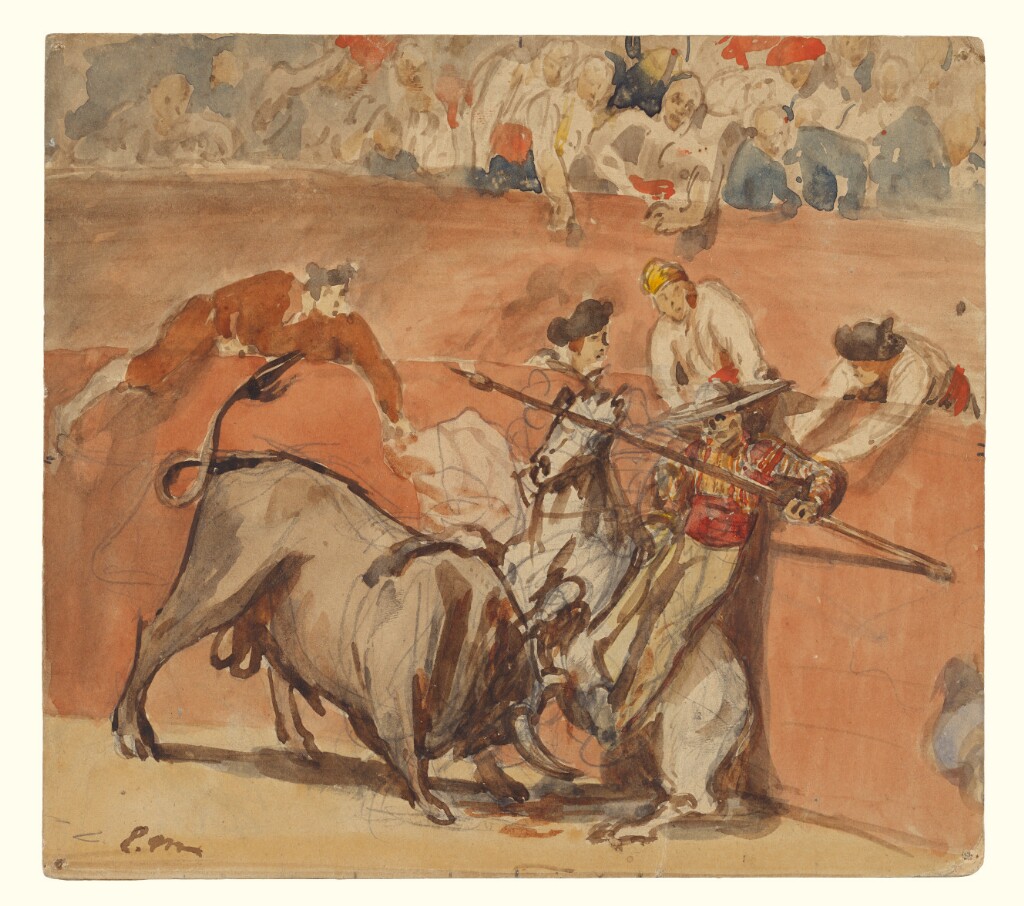 A.L. Kennedy’s On Bullfighting (1999) is a slim volume that is, as it declares in a direct and Montagnian way, an explanation and exploration of the tradition and practice of the corrida de toros—somewhat simplistically translated to bullfighting in English—particularly as it exists in Spain. As a guide for the uninitiated, On Bullfighting does exactly as it promises; Kennedy reports, with exacting diligence her research and her experience. But On Bullfighting is not merely informational—it can’t be. Even agreeing to be the eyes and ears to such a bloody spectacle demands interrogation. Yes, she wrote the book because she was asked, despite having no prior knowledge of the corrida, but why agree? Kennedy offers a thoughtful consideration of possible reasons for doing so, including her own stance on human-as-animal—we are “walking meat,” she says, albeit meat capable of great and terrible things through application of intellect, spirit, creativity, and tolerance for suffering—and a nuanced view of ritual and faith firmly situated in historical context. She also includes the most overwhelming reason to refuse any part in the corrida: the omnipresence of death and pain.

It is important to note that On Bullfighting does not set out to persuade anyone in regard to the ethics of the subject. Neither defending nor excoriating is the point of the book. The driving reason is more complex: “My predisposition has always been, after all, to pay the best of my attention, to try to know, to understand. Which is why I’m here, really why I’m here—because I pay too much attention. I didn’t sleep on the train because I spent last night remembering that I pay too much attention, remembering what I know and do not understand.” Kennedy’s greatest asset as a writer is the root of her distress. A further fecund wrinkle of English-language syntax complicates the matter: the phrase “remembering what I know and do not understand” is both a catalog of two things (what is known, as well as what is not understood) and a single unified thing (what is known but not understood). The latter is the marrow of the work: the conflict, even devastation, arising from gaps between knowing and understanding. The book itself is the dogged trail toward an attempt to understand, if not an arrival at it. The tension, as Kennedy experiences it, is so palpable a source of pain that On Bullfighting begins with the author on a very literal ledge.

She is planning to jump to her death. In the midst of a crisis of faith, artistic and otherwise, on the heels of a romantic severing, and in the grip of poor bodily health, she is ready to end things. Each of these circumstances are plain facts; each is precipitated by the impossibility of understanding what isn’t bound by the logical or causal. A relationship can fail through no fault of one’s own. A body can produce pain even when the body is well cared-for. What holds her back from the plunge is the audible presence, in the distance, of a folk song she hates. She cannot kill herself while this song plays; it would be humiliating. It would be a meaningless or, worse, an embarrassing death. With her characteristic flinty humor, she writes, “Oh, and do feel free to imagine my unparalleled delight whenever I remember that Mhairi’s Wedding is, at least in part, why I’m alive and typing this today.” Such a death—“jumping while the bloody thing is still being sung”—would undermine any chance of dying “with even a rag of credibility.” The juxtaposition of being so much at the end of her emotional tether that she is ready to die and the eternal frustration with the song is direct, dark, and still comic, simultaneously caustic and confiding.

The immediate effect of such an opening in this book is intense, strangely disarming and, as the relationship between writer and reader evolves across these pages, even comforting in the presence of so much pain and death, which are truths of the corrida, for both the toros and the toreros. This is not to say the disclosures Kennedy makes are all so direct; she is circumspect about the failed relationship, offering a spare paragraph-long sketch half-buried in the book’s middle, and the details of her writing block never name any of her multiple past successes nor round out any attempts in the book’s present. Even on the same page as she invokes the infuriating, lifesaving, personal role of “Mhairi’s Wedding,” she begins defining the vocabulary of bullfighting. The rich, highly detailed glossary is necessary to the intended audience of the book, but it also frequently redirects moments of possible intimate revelation toward the corrida. Rather than being explicitly self-preserving in the veering from vulnerability, however, these moments gather understated metaphorical strength as the book continues. The conceit culminates in the sixth chapter, which charts the three-act structure of a typical corrida and provides an example. Beyond the component parts and the particular pomp of various gestures considered requisite in the corrida, the torero’s aim is “to control a bull of which he has no real prior knowledge, to dominate it with style and to conjure up its death correctly. If needs be, he must also present his own injury as perfectly as he can.” This is the work of the torero and the ends to which he wields cape and sword. So Kennedy maneuvers her own muleta—the narration—and leads the reader as is necessary for this work to come to completion. These skillful flourishes recall—without explicit mention—Kennedy’s own stepping back from the ledge: her own death could not be correct like that. And, in the sense of religious ritual that permeates the corrida, the aesthetic and spiritual dimension of it, presentation and correctness are fundamental to bullfighting—and to the making of art.

That knowledge makes it all the more striking when, in exquisite and excruciating detail, Kennedy relates the first corrida she attends. The only real nods to the personal are the ways in which her body occupies its physical space in the arena; the exacting camera of her attention is fixed on the spectacle. This bullfight is a messy, inhumane series of failures. The bulls themselves are lackluster, one torero is gored, and the bulls die under clumsy, hacking strokes. She writes, “I do not understand how the aficionado’s passion for toreo can tolerate the shambles which is a bad corrida. Which brings me again to matters beyond common sense, to questions of love and faith—both shot through with spilled blood,” which is to say that which is known but not understood. Chapter six is titled, with deceptive precision, “Self-Portrait.”

As she writes in the opening chapter, her own near-suicide is very much in conversation with the corrida: “Whatever you or I think of how and why they do this, they are making that commitment every working day—a commitment which I’m pointing out I know that I can’t equal. But my little confession of a contemplated sin is intended to indicate that I will give you as much as I can. I do promise that.” She does, therefore, pay attention on our—writer’s and readers’—behalf, “to discover if the elements which seemed so much a part of the corrida—death, transcendence, immortality, joy, pain, isolation and fear—would come back to me. Because they were part of the process of writing and, good or bad, I miss them.” Arriving at the conclusion of the work as a reader, all of those elements appear to have arrived. The passages in which she traces Federico García Lorca’s footsteps and his own identity as an aficionado of the corrida are especially transcendent, a poignant interplay of connection and isolation. She touches the light switch in his study, as he might have done, exiting the room for the last time, and reverses his final fatal train ride from Madrid to Granada. As she regards the more contemporary matter of the book, she even discovers in old footage of torero Domingo Ortega an example of the corrida that brings the experience close to what she has been told it can be. A final exhibition by two of the contemporary corrida’s leading lights, the teenaged El Juli and the experienced torero Ponce, she narrates such that the reader can see something of the aficionado’s passion, too, even if the reader does not share that feeling. The only thing that seems to be missing, perhaps—for Kennedy—is joy.

This book of nonfiction fulfills so many of the customary promises of A.L. Kennedy’s fiction: provocative and humanely explored moral nuance, shards of humor as sharp and reflective as slivers of a mirror, that unflinching eye. Yet, on the final page, as she contemplates a talismanic figurine she bought in Spain, now broken in transit, and feeling no closer to artistic restoration in her own writing practice, she writes the book’s last words: “I don’t know what to do.” A final arrival at knowing the problem and not understanding what must come next.

On Bullfighting is now more than twenty years old, and it comforts me to know that Kennedy’s story does not end in this despair. Her story collection Indelible Acts was published in 2002, followed by the novel Paradise in 2004. Since then, seldom have two years passed in a row without some publication in her wide-ranging, multi-genre writing practice, and the preponderance of work is indeed in fiction. But the end of this book does not yet know that. The writer, like the torero facing the bull, faces her own mortality without foreknowledge of this abstract antagonist of creative hollowness. And yet, Kennedy’s telling of On Bullfighting transmutes the wound, which is that final line into something beautiful, something replete with meaning: in the face of not-knowing, going on despite it all.