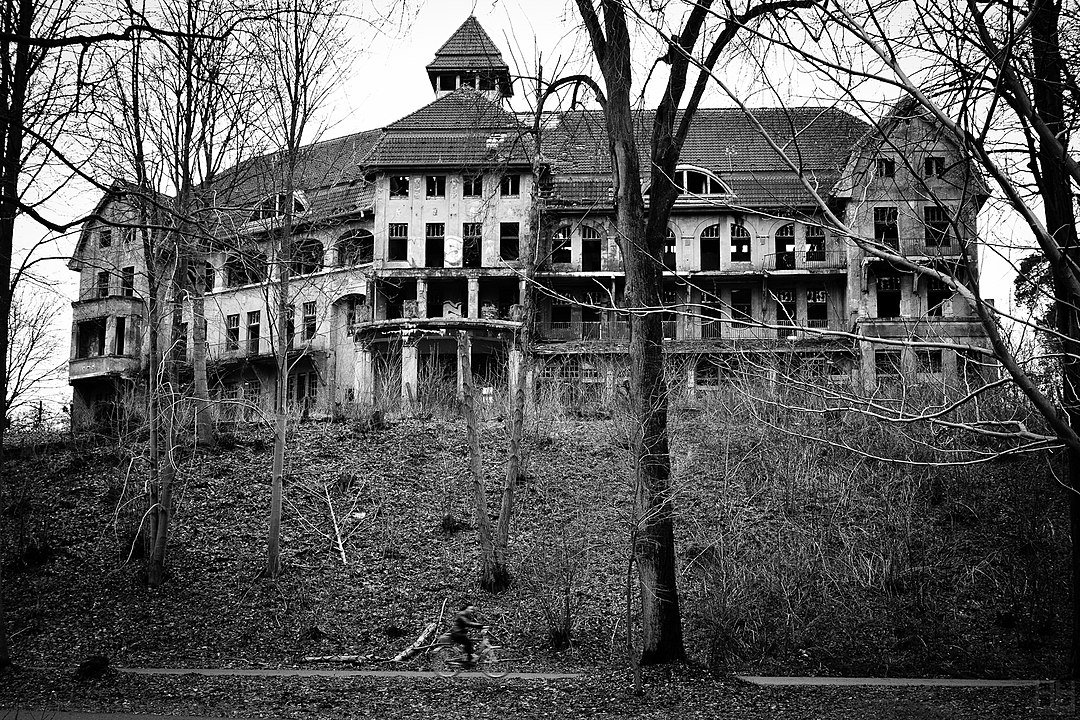 It’s scary when a secret horror you’ve harbored for years is said aloud in a friendly, sensible voice by someone else, as if the matter is no big deal, has never been a big deal—as if the horror exists outside the story you tell yourself about yourself in a state of absolute reality. “I lived vicariously through you, you know,” my mother said to me. I was horrified. Of course you did, I thought; those words don’t seem adequate now, can’t begin to describe how it feels, how it felt. The sentiment is such a small thing, I thought, the stuff of melodramas, women’s worries. So why does it feel so large, so monstrous?

This moment occurred recently, during the season for ghosts, for leaf litter, when on walks to my daughter’s elementary school I commune with my shadow—admiring its length, its darkness. It’s as much a time for beginnings as endings, and writer Shirley Jackson had a particular gift for beginnings. The first sentence of her 1959 novel The Haunting of Hill House reads, “No live organism can continue for long to exist sanely under conditions of absolute reality; even larks and katydids are supposed, by some, to dream” (who the “some” are, the narrator doesn’t say). On the one hand, dream means images and impressions produced by the brain during sleep—a phenomenon scientists still lack a definitive explanation for—but on the other, it might also mean wish or hope. What could a katydid hope? What does a lark wish?

The Haunting of Hill House is a novel in which the machinations of science are used to measure two human oddities: a charismatic psychic and a poltergeist-haunted shut-in, both women, both single. They might as well be a lark and a katydid. Eleanor, the woman we follow most closely, has spent eleven years “caring for her invalid mother” when the story begins. The experience has “left her with some proficiency as a nurse and an inability to face strong sunlight without blinking.” Her time as a caregiver was “built up devotedly around small guilts and reproaches, constant weariness, and unending despair.”

The curious aberration in Eleanor’s narrative, however, is a mysterious downpour of rocks on the roof of her childhood house when she was twelve years old and when her “father had been dead for not quite a month.” The presumption—at least by Dr. Montague, the scientist who asks Eleanor to come to Hill House—is that Eleanor is either the conduit of some bad-tempered ghost or possessor of telekinetic powers. In either case, she’s called to Hill House for what her sister fears are “experiments,” the kinds of experiments conducted by men on women: “You know, experiments.”

Eleanor’s drive to Hill House establishes her dream state, her reservoir of wishes. She doesn’t want to reach Hill House too soon, perhaps in some latent fear her destination is just another entrapment; the journey itself permits her capacious imagination the freedom to roam and explore, even going so far as to change the very trajectory of time. “Time is beginning this morning in June…in these few seconds I have lived a lifetime in a house with two lions in front,” she tells herself, referring to “a vast house, pillared and walled, with shutters over the windows and a pair of stone lions guarding the steps” that she passes. Her daydream offers her an imagined life in that house: she’s waited on by a servant and shown deference by her neighbors in town. Later, she pulls her car over to revel in “a row of splendid tended oleanders, blooming pink and white in a steady row,” and while the trees appear well-cared for, she wonders how and why, since there’s “no house, no building, nothing but the straight road.” Of course, all these houses and lack of houses foreshadow Hill House—not the imagined house, the house raised by Eleanor’s dreams—but a house of “absolute reality” in which, the narrator assures us, “walls continued upright, bricks met neatly, floors were firm, and doors were sensibly shut.” Hill House itself is an exaggerated version of Eleanor’s own history, which includes warring sisters, an absent father, an unmarried woman, and an aggrieved caregiver, and is composed of the hard realities of family debts that come due with time. In fact, the supernatural occurrences Eleanor experiences in Hill House all smack of the domestic—the small injustices, the tedium of caregiving, the long-held resentments.

Eleanor wakes on her first morning in Hill House to the sound of knocking, a noise she recognizes as the sound of her mother banging on the wall for help, then feels an accompanying cold Eleanor describes as “degrading,” the same cold she and the others feel near the entrance of the house’s nursery, and which Eleanor calls “deliberate, as though something wanted to give [her] an unpleasant shock.” The nursery is proposed by Montague to be the cold “heart of the house”—the place from which the house’s grievances emanate. As we learn from Montague, the two sisters who grew up in the nursery came to blows later in life and were separated from one another by various perceived wrongs: one was supposed to have stolen the other’s love interest; one inherited the house while the other was driven away from it.

Naturally the house harbors these rifts and familial crimes and angles to recreate them. For example, the group finds handwriting scrawled on a hallway wall that reads, “HELP ELEANOR COME HOME,” goading Eleanor and fellow resident Theodora into a fight about selfishness on Theo’s part, versus Eleanor’s own “sympathy and understanding.” Theo cultivates what Eleanor sees as a bohemian lifestyle, is cool and detached, socially adept and cultured, even progressive, while Eleanor is timid and awkward—a result of years of caregiving. In this particular scene, Eleanor is both terrified and titillated to find she’s been singled out by the house until Theo accuses her of writing it herself for attention. The men of the house—Dr. Montague and Luke (a young ne’er-do-well relative of Hill House’s owners)—misinterpret the women’s fight, redefine it, and in the process, diminish Eleanor’s experience: “The doctor laughed, then, and she stared at him and then at Luke, who was smiling and watching her. What is wrong with me? she thought. Then—but they think Theodora did it on purpose, made me mad so I wouldn’t be frightened; how shameful to be maneuvered that way.”

Later, Theo accuses Eleanor of smearing blood on her clothes. In this case, the tables have turned and Theo responds with fear; Eleanor can’t help but gloat a bit while simultaneously questioning her own “fairness”: “‘It’s Theo’, she said as they came to the top of the stairs. ‘She’s hysterical. Someone—something—has gotten red paint in her room, and she’s crying over her clothes.’ Now I could not have put it more fairly than that, she thought, turning to follow them. Could I have put it more fairly than that? She asked herself, and found that she was smiling.” Naturally Theodora—the “selfish” one—would become “hysterical” over her clothes, privileging Eleanor in this case as “calm” and “sane.” Eleanor cleans the blood off Theodora and in the process, finds herself disgusted by her: “‘For heaven’s sake,’ Eleanor said, ‘let me wash you off.’ She thought, without trying to find a reason, that she had never felt such uncomfortable loathing for any person before.” Of course, Eleanor has felt it: bathing Theodora most likely reminds her of the many times she bathed her mother—a burden her own sister doesn’t seem to have shared. Due to the blood, the two women are now forced to share clothes and a bedroom. They become, as Theodora says, “practically twins,” and in effect are traumatized, infantilized, and forced by Hill House to embody the sisters who once lived there.

Eleanor’s experiences at Hill House, away from her sister, brother-in-law, niece, and the bad memories she carries, also ignite her introspection; “I am learning the pathways of the heart,” Eleanor tells herself. She’s gaining insights into Theodora’s, Luke’s, and Dr. Montague’s characters, for example, that are both cutting and true—particularly with regard to their blindness to her complexities, her intelligence, and imagination. Of Luke she wonders, “Does he think that a human gesture of affection might seduce me into hurling myself madly at him? Is he afraid I cannot behave like a lady? What does he know about me, about how I think and feel?” Her preternatural gift, then, may not be telekinesis but emotional intelligence, a talent often exploited by patriarchal structures—fundamentalist Christianity in particular.

In fact, Hugh Crain—the house’s original owner—seems to have been a deeply religious man. Luke discovers an illuminated religious text in the library that had been compiled and illustrated by Crain for one of his daughters, filled with threats of Hell, and signed in his own blood. While Eleanor doesn’t make a direct connection between the blood in the book, the blood on Theodora’s dress, a ghost child’s cry, and the pleas for help she finds on the house’s walls, a savvy reader may suss out Shirley Jackson’s underlying thesis by connecting the dots: natural allies like Theodora and Eleanor are driven apart by systemic shaming. In competing for male attention, a father’s approval, a scientist’s interest, an inheritance, even room in heaven, they reenact their own degradation. Shirley Jackson is suggesting these proclivities begin with the children—after all, the nursery is the cold heart of Hill House.

In what amounts to Eleanor’s only true ghost sighting, Eleanor and Theo encounter a picnic in a garden, a sight vivid after what’s described as “a black sky” “pale trees” and “colorless grass:”

They could hear the laughter of the children and the affectionate, amused voices of the mother and father; the grass was richly, thickly green, the flowers were colored red and orange and yellow, the sky was blue and gold and one child wore a scarlet jumper and raised its voice again in laughter…then Theodora screamed. ‘Don’t look back,” she cried out in a voice high with fear, ‘don’t look back—don’t look—run!’

The image is prelapsarian, ideal, colored by nostalgia and by dreams—as in wish or hope. Then, in a Biblical directive redolent of Lot’s story, Theodora sees something coming on fast behind them, something terrifying, a something never described or explained, something we might interpret as the Fall, as disappointment, an oncoming rift, death, a vengeful God.

The secret horror isn’t magically eradicated because its spoken aloud. Rather, its implications spread, deepen, further infiltrating our complex web of relationships, our motivations, our dreams. In fact, some horrors can’t be named; the words fail us.