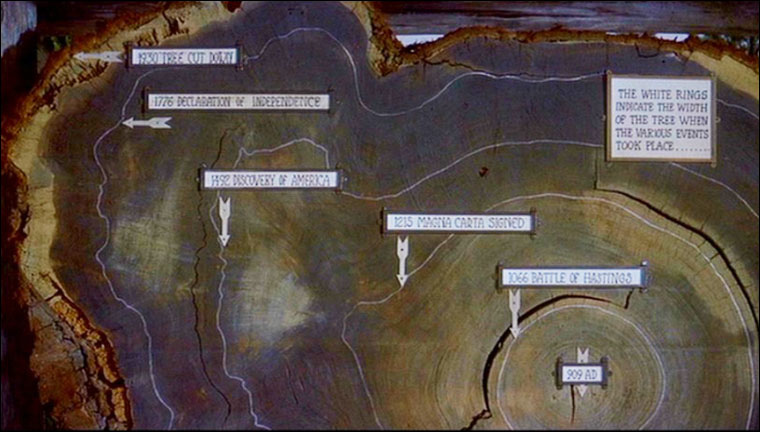 “Somewhere in here I was born,” says Kim Novak in Alfred Hitchcock’s 1958 film Vertigo, touching a halved redwood. “And here,” she says, indicating with her fingers the barely-there space between two tree rings, “I die.” As if it could hear her and empathize, she tells the tree, “It was just a moment to you.” It’s that direct address—“It was just a moment for you”—that sends a tingle up my spine every time I hear it. Of course, it’s a rhetorical gesture, meant to trick Jimmy Stewart’s Scottie into believing she’s Madeleine, wife to an old acquaintance of his and believed to be crazy, or haunted, or both. But, she says, speaking again to the tree, “You took no notice.”

In the same shot, we can see recognizable historical markers like “Magna Carta signed” and “War of Independence.” Hitchcock is trying to contrast for us the tree’s long life with “important” events in the human world—events with a decidedly Anglo-American bent. Vertigo is a film, after all, whose primary drama takes place at an eighteenth-century Spanish mission where the residue of colonial religious conquest creates an atmosphere of anxiety, even dread. When the words “Magna Carta” and “Independence” appear on-screen, we imagine they should be reassuring, indicative of progress, jurisprudence, and democracy, but they too vibrate with menace. What are these events to a tree, to the planet, to geological time? The tree is, of course, just a tree—neither more nor less—but for Novak’s character, it stands as a totem to her own brevity, her doomed but beautiful, crazy-lady ethos, her frantic impermanence. She charges the tree with neglect, begins to cry, then disappears further into the forest. For a moment Jimmy Stewart can’t find her; she’s vanished completely. “It was just a moment for you…you took no notice”—her words hang in the air like fog above San Francisco Bay.

The trickery at the heart of poet Kathleen Graber’s newest collection The River Twice isn’t Hitchcockian—there’s no murder in the offing—but her poems to America have their own double meanings. If, for Novak, the tree is a silent acting partner in a scene about neuroses (women are fragile, women are crazy, women are ciphers), then for Graber, America is itself a “clamorous silence” (to quote Joy Williams) against which she volleys her intellect. And like Kim Novak’s redwood, the America Graber’s poems speak to is in turn an “unconscious patient” and a “mute hypochondriac” (perhaps a nod to Eliot’s “Prufrock”), indicative of America’s unwillingness or—perhaps more precisely—its inability to speak back.

You may also imagine the speaker Graber creates in her apostrophic poems is herself America, conflicted and convoluted, speaking to an archetypal version of herself, an America that has become, as she writes in “America [October],” “merely the idea of listening…out of which [it] offer[s] / no reply.” What results from this interpretation are poems made of anxious, one-sided conversations—sometimes revealing, sometimes obscuring the fractured self at their center. How much is the speaker to blame for what she sees as troubling in the culture? Of what use is self-indictment and how might identity be formed in the crucible of condemnation? If, for example, eighteenth-century American reverend Jonathan Edwards describes sinners as insects in “the hands of an angry god” dangling above Hellfire (a description that surely compelled his congregation to reform themselves accordingly), then the twenty-first century American is dangling above not religious damnation, but natural disaster and structural inequality.

These twin concerns animate much of The River Twice and the poems to America in particular. In them, Graber wonders how and if this new kind of sinner might reform, and if reformation is even possible. In “America [train],” Graber tells America a story, beginning:

…Last week in Longmont, Colorado,
Just down the street from where my brother lives, a girl—
eighteen, a college freshman—lost both her legs trying to catch
a freight train with two friends just for kicks. And I think
of my uncle, hungry, broke, hopping across the early thirties
until he could land a job with my father, working
the custodial nightshift at Greystone, mopping floors
as the mad, insomniac women pounded their heads
against the bars. Three economic analysts report the dawn
of a new reality. America, neither I nor any of this exists

Inside this passage we find the speaker grappling with the anachronistic image of a contemporary teenager injured by doing the very thing her uncle was compelled to do in the last century, and who, because of the country’s economic depression, worked at a psychiatric asylum where “mad, insomniac women pounded their heads / against the bars,” reminding America (and by extension us), how mental illness, disability, and poverty have been addressed (or not) in the past, and how the physical realities of these lived experiences seem to vanish in the wake of the “economic analysts reports” that say we’ve reached “the dawn of a new reality” that has automated labor and made human interaction virtual. “And yet,” Graber says,

…the tracks still run beside the white monumental
chicken-processing plant at the end of Main Street—
it’s an old redbrick cowboy town—& the train slows right there
as it intersects the road. I’ve sat mesmerized—O, the immensity
of the West—in a rental car at the crossing, watching it pass
& pass.

The detritus of older versions of America still exists, as do allusions to colonialism—“cowboy,” “white monumental,” and the Whitmanesque phrase “O, the immensity / of the West,” but the speaker, again, has trouble locating herself either in America’s past or its future, as either the teenager or her uncle. She ends the poem with this admission: “I don’t remember ever thinking I was invincible— / though I must have thought you were—though we say now / that that’s what all kids think. You are the world- / body, you, who taught us each thing wants only to be more.”

Perhaps as a girl she hadn’t deluded herself about her own permanence, but she had believed America was permanent, that it was something embodied, a physical manifestation of desire. But times have changed for the speaker; many of the old virtues we associate with America no longer apply. Words and phrases like “allegiance,” “instinct,” and “the right thing”—all culled from her poems, and all questioned in the context of those one-sided conversations—are reexamined until the demise of certain self-delusions give rise to new ones. In “America [peaches],” Graber writes:

America, I know I could do better by you,
though I stoop conscientiously three times a day
to pick up my dog’s waste from the grass
with black biodegradable bags. And lest you suspect
that this is more pretension than allegiance, know
my dog was the one at the shelter no one else
would take. He is fat & lazy, and I could do better
by him as well…

The admission is funny at first. Yes, the speaker knows the planet is at serious risk, and she responds accordingly—in a small, probably inconsequential way—but she also imagines America questioning her motivations, and here the humor turns a bit sinister. Certainly, Puritanical Jonathan Edwards believed the soul should be plumbed, but what about contemporary political purists and ecological warriors? Later in the poem she says:

I confess it would have been a moral error to have embraced him
if I did not have the means to keep him fed. But
I am writing tonight because there is something wrong
with your peaches. The ones from the supermarket
are so soft & cheap—half the cost of the ones
sold at the local farm—but the flesh near the pit
is so bitter and green. It is a fruit like the mind
we are making together: both overripe and immature.

Like all poetic apostrophe, Graber’s is an act that, despite its theatricality, serves richer truths. She is “confessing” here her failures, admitting her blind spots, her corners cut, the “bitter and green” core of herself. She, in effect, segues herself with the America she is writing to; they become one mind described in “America [October]” as:

conceived in genocidal, colonial violence,
& yet, like the universe, you & I are here today,
going on & on, discovering that we were naïve,
or simply wrong, about almost everything we thought
we knew. Truth, an envelope with nothing inside.

The admission is painful but necessary, though it may offer no final recompense, as illustrated by the middle-class boy she describes in “America [October]”: someone who “feels filled with his anger & shame / at not being able to imagine how to make things right.”