Home
»
Critical Essays
»
Queer Desire and the Myth of Iphis 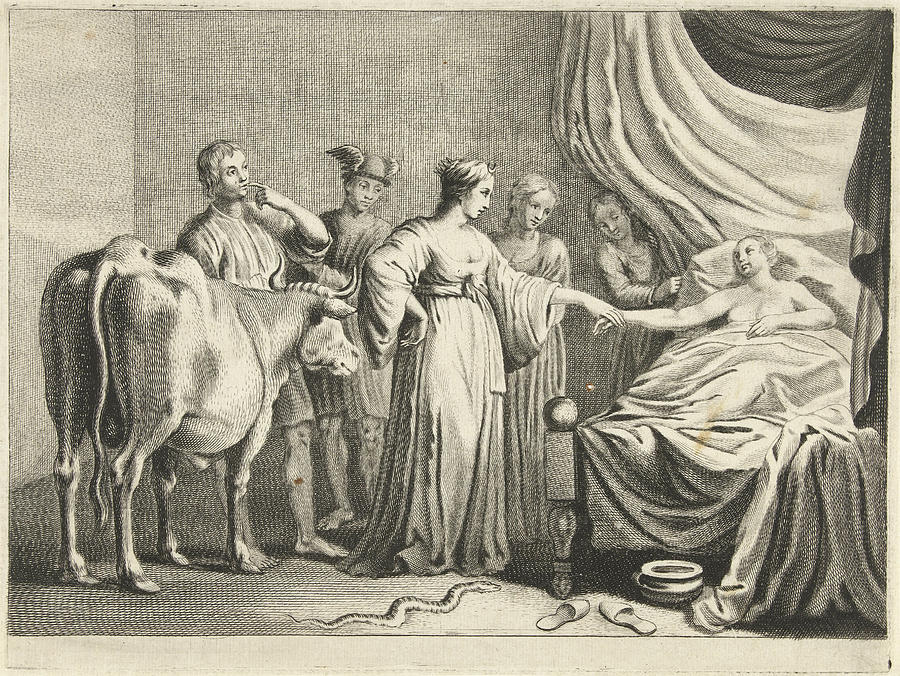 The Middle Ages might seem a strange time and place to turn to in looking for queer history, especially during Pride, a time meant for celebrating queer lives and identities. The Middle Ages’ sexual ethics are hardly associated with progressiveness. And yet, perversely—queerly?—it’s worth doing. Because circling—and sometimes escaping—the restrictive social and religious dogma that worked to eliminate and punish queer sex acts in the Middle Ages were models of queer identity that should serve as spurs to us even now to not just celebrate but to see the social importance—the social necessity—of queerness.

Before getting to that, however, let’s start with the social restrictions, since they lay the groundwork for understanding that social necessity. What we’d now identify as queer sex acts were, in the European Middle Ages, commonly considered under the banner of the sin of “sodomy.” As historians like Mark D. Jordan have described, the particular sin of sodomy—a sin of sexual transgression—largely developed in the Middle Ages, and the after effects of this development are long-reaching, shaping contemporary western homophobia and religious and sexual discourse.

Sodomy was considered socially dangerous in the Middle Ages for a few reasons. First, it defied sexual norms. In a culture in which sex was primarily considered a social good because of procreation, homosexual sex acts obviously privileged sexual pleasure or intimacy. Second, worries about sodomy in the Middle Ages were almost always worries about disrupting gender norms and hierarchies. The twelfth-century theologian Alain de Lille, in one of the earliest lengthy polemics against sodomy (especially between men), laments that homosexual sex acts lead men to act as both subject and predicate (“Praedicat et subjicit”). Relatedly, Étienne de Fougères, also writing in the twelfth century, complains about women who “joust without lances” and reject the company of men. Both Étienne and Alain worry that sodomy leads men and women to act in ways counter to their prescribed gender. Men choose not to lead but to be led; women become martial aggressors. Sodomy posed a dramatic threat then to not just sexual but social norms. It was considered dangerous enough that parish priests were instructed not to speak of it too directly when counseling parishioners lest someone who had not previously known about sodomy learn about it—and perhaps even pursue it.

Many of these “queer” narratives have careful rules and regulations around them—monks’ eroticism and Jesus’ vulva are in many ways rhetorical. They aren’t typically intended to spur homoerotic contemplation, but were instead creative ways that medieval people used imagery and language to imagine greater social and religious intimacy. (It’s hard to be more intimate than engaging in an extended make out session!) But what’s interesting—or at least what I’m interested in—are the ways that, even as sexual ethics condemned sodomy, homoerotic narratives were an important space for medieval people to think creatively and to challenge proscribed social norms. One of my favorites of these types of narratives is the story of Iphis and Ianthe. First written by the Roman poet Ovid in the Metamorphoses, it was told and retold throughout the Middle Ages by poets like John Gower (a close associate of Geoffrey Chaucer) and Christine de Pizan (one of the first women authors to make a living through her writing), and in the popular moralizations of Ovid (which turned mythical stories into something like moral or religious fables).

Iphis’ story is one of magical transformation. Assigned female at birth, Iphis is raised as a boy by their mother, Telethusa, due to their father’s decision that all female children will be killed in infancy. All goes well until Iphis becomes engaged to a young woman, Ianthe. Ianthe and Iphis long for each other and deeply desire marriage. Iphis and Telethusa keep delaying the marriage, however, because they fear that it will expose Iphis’s secret. Iphis laments loving Ianthe, seeing it as, in Valerie Traub’s terms, amor impossibilis—an impossible love. Iphis lacks a phallus and thinks this indicates that they do not have the physical means to satisfy their desire (this detail gets me every time—if only Iphis had had access to sex positive sex ed!). And so, Iphis worries that even as they will get what they most desire through marriage—Ianthe as a wife—Iphis will not be able to “complete” that love and will ultimately risk exposure and humiliation. In the end, the goddess Isis intervenes, and Iphis transforms into a man (perhaps biologically, perhaps socially—Ovid’s original isn’t entirely clear). Iphis and Ianthe live happily ever after.

Despite the nod to heteronormativity at the end, this is, I think, an important text in queer history for a number of reasons. As the grammatical gymnastics around pronouns that the story’s many medieval versions go through indicates, pinning down the gender politics of Iphis isn’t a straightforward (ha!) task. And in fact trying to do so is misguided. The story shows us the complex interplay of individual desire, social situation, and self-knowledge that shapes gender. As some versions of the narrative indicate, this can open up space for exploration—for asking and thinking about the relationship between sex and gender and the ways that gender itself is shaped and revised throughout a person’s lifetime. In Christine de Pizan’s version, Iphis becomes a powerful cipher through which she thinks about her own (masculine and feminine) identity as a writer. In a cousin of the Iphis story, the Roman de Silence, the story becomes a space for interrogating the primacy of nature versus nurture in shaping identity.

In my favorite version of the story, told by John Gower in the late fourteenth century, Iphis’s history is a mystery even to Iphis—a fact that critically shapes Iphis and Ianthe’s developing relationship. Gower describes how the two grew up as childhood playmates who would often lie together in bed “sche and sche.” Then:

Iphis and Ianthe, constrained by Nature—by their nature but also by the rules of Nature and their own biology—engage in something, a “Thing” that was all unknown to them. It is in this space of unknowing yet reaching out to each other, exploratively embracing and pursuing each other, that the transformation occurs. Gower tells us that they are transformed as Cupid witnesses their “grete love” and feels the need to bring their desire in alignment with the “lore” of Nature.

But what really strikes me about this scene is the unknowing. Gower’s story of Iphis occurs as part of a much larger work, a poem called the Confessio Amantis, in which a failing lover, Amans, gets advice from his priest, the allegorical figure Genius. Genius tells the story of Iphis in the section of the poem about the sin of sloth. Amans confesses that slothfulness, particularly in the form of pusillamité, cowardice, has frustrated his efforts as a lover. Genius tells Iphis’s story as a counternarrative, a story of how great courage can win love. Iphis and Ianthe, with their willingness to throw themselves into Some Thing—some desire, some practice, some love—that was all unknown to them, are an example of the kind of courage that can help someone reach great love.

I don’t want to oversell what’s happening here. Gower isn’t out marching in the medieval equivalent of a Pride parade. But there is something shockingly moving in the fact that Gower brands this expression of desire as a cure for cowardice. It frames the willingness to exist in the epistemological uncertainty constructed by unknown desire as a type of courage. It suggests that the willingness to move into the unknown spaces of desire and bodily union is powerful and transformative. That there is something to be desired and worthy of imitation—something that cowardly lovers should learn from—in the dwelling in obscurity, in the unknown spaces, of sex and desire.

When I think of what queerness offers, I think of Alain and Étienne, and I think of Iphis. Because Alain and Étienne aren’t entirely wrong—although they are incredibly far from right. What they’re threatened by is what is powerful about queerness. Queerness offers a way into unknowing some of the rigid boundaries we have inherited around what sex should be and what gender is. It can upend gender hierarchies. It can ask us to privilege pleasure and intimacy in our own desires. As in Gower’s Iphis, queerness is a sort of stepping into the unknown. An embracing of a type of courage that means admitting that the rigid social lines around ourselves—our bodies, our desires, our self-knowledge—are perhaps not as rigid as we think. That great things might come if we can only take that unknown step.