Home
»
Uncategorized
»
Of Mice and Horsemen: Point of View in ‘Lord of Misrule’ 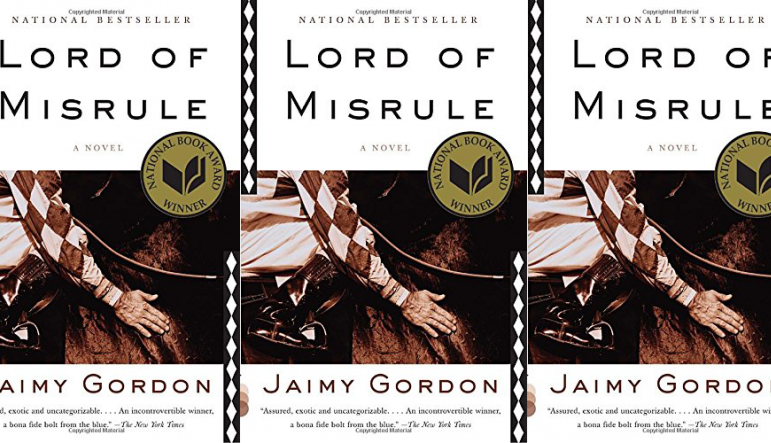 Early in her National Book Award-winning novel Lord of Misrule, Jaimy Gordon offers two competing accounts a single conversation through two different points of view. Medicine Ed, an old groomsman at a rundown thoroughbred track in West Virginia, spies on an encounter between Maggie, a young woman, and Tommy Hansel. Tommy is Maggie’s employer, her lover, her partner in grift, the master to her willing servant–theirs is a difficult relationship to define, as evinced by their conversation itself.

Here is their dialogue, as first reported to the reader by Medicine Ed:

You shut up, you hear me? he said in her ear. That’s enough out of you.
Let me go, she said. Someone might come by.
Just shut. Do you hear me? Do you understand?
What do you want? she whispered.
I want you to capitulate.
All right. All right, she said.

And here is Maggie’s subsequent version of the same conversation–similar, but altered:

That’s enough now, do you hear me, Maggie? he said.
Let me go. Someone might come by.
You’re going to shut up, starting now. Do you hear me? Do you understand?
What do you want? she said very low.
I want you to capitulate.
All right. All right, she whispered.

There can be no doubt, of course, that Maggie and Medicine Ed are reporting the same encounter. And yet it’s equally clear that their reports are far from impartial. In Maggie’s account, Tommy is just slightly more verbose, less harsh; meanwhile, Medicine Ed’s account lacks the minor tenderness of him addressing Maggie by name and seems to be somewhat inflected by Medicine Ed’s own patois (“Just shut”).

So, who’s right? The novel provides the reader no grounds on which to answer. Both Maggie’s and Medicine Ed’s accounts reference a real event in the novel’s fictional universe, but in a very real sense, the event itself does not appear in the novel at all: Instead, the reader receives two retellings of that event, subjectively sieved through screens of selectivity and language. Tellingly, Gordon eschews quotation marks to indicate speech throughout Lord of Misrule–an indicator that none of this dialogue is objective, or actual, but is instead being filtered through the consciousness of a point-of-view character.

The common term for Gordon’s narration here is “free-indirect discourse,” defined by James Wood in How Fiction Works as narration that “takes on [a character’s] way of thinking and speaking.” As Wood goes on to observe, when free-indirect style is used, “[t]he narrative seems to float away from the novelist and take on the properties of the character, who now seems to ‘own’ the words.” The use of free-indirect discourse, in other words, entails an authorial abdication of control. It means sacrificing the sharp black-and-white definition of narrative certainty through objectivity in favor of vivid Technicolor shades of characterization through an embrace of subjectivity. It’s a move from This is exactly what happened, and how, and why to Here is what it sounds and feels like to be this person.

This sacrifice also leaves the basic question of narrative reality–what did Tommy Hansel really say?–open. Free-indirect discourse places character as a buffer between narrative truth and the reader.

For some readers, this buffer can be disconcerting. Novelist Jane Smiley, for example, feels compelled to attach a caveat to her review of Lord of Misrule: Gordon’s point-of-view choice, Smiley argues, “allows for immediacy but not for perspective. The wisdom these characters offer is limited by the narrowness of their world.”

It’s a true observation, as far as it goes–the novel’s point-of-view characters all observe the world through a glass darkened by their own hopes, fears, misapprehensions and vocabularies, which limits the judgments they can pass and wisdom they can offer–but Smiley’s mistake is to mention this as though it were a flaw. In fact, the tension between what is real and what is observed, remembered, or expected is a key feature of Lord of Misrule. Furthermore, the novel’s dramatic irony is complicated by the fact that–although Gordon teaches the reader in early scenes like the one described above that her characters are not cameras but rather flawed, biased participants–narrative reality is only accessed through the characters themselves, so the reader can rarely be certain just what, exactly, her characters are getting wrong, or by how much they err.

This uncertainty is fitting in a novel so explicitly concerned with luck, with elements of chance that exist beyond the reach of rational understanding or conscious foresight. Lord of Misrule embraces the perspectives of characters whose understanding is flawed and whose foresight is limited–characters who must, after all their scheming and dreaming is done, finally bow to luck. Gordon is not interested in passing judgment on what Smiley calls the “specific and alien world” of her novel; she is not interested in–and may not know herself–what Tommy Hansel really said. Instead, Gordon has written a novel about how hope and fear and love and greed cloud can cloud judgment, corrupting even the best laid plans of mice and horsemen. Built right into the book’s point of view is Gordon’s understanding that, at the racetrack as in life, chance is the ultimate arbiter.

This is Greg’s fifteenth post for Get Behind the Plough.