Home
»
Reading
»
Need and Greed in Fields and Mansions 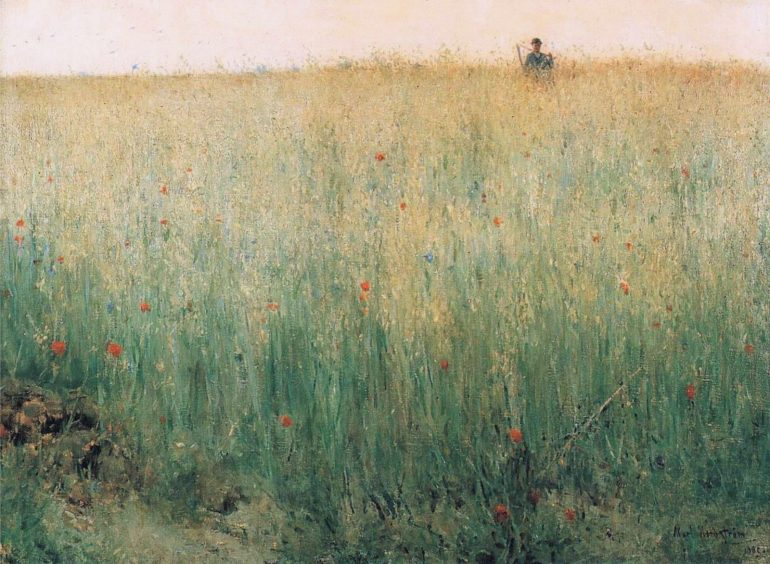 Whenever I go on a long drive (San Francisco to LA, New York to North Carolina, Memphis to Seattle) I’m awed by how much of the country is farmland. In North Carolina, the sprawl of Durham or Raleigh melts quickly into fields: tobacco, cotton, corn, Christmas trees. The fields are punctuated by trailer parks, abandoned gas stations, and falling-apart barns. The view is a constant tug-of-war between lush greenery and dilapidated structures. Driving through southern fields makes visible one of the persistent paradoxes of American production: the coexistence of excess and need. In the South, agriculture is still an economic pillar in some states: in North Carolina, for example, agriculture contributes $84 billion to the state economy, and net farm income is $2.8 billion. Still, in a 2004 study of migrant farm workers in the state, 47.1 percent were classified as “food insecure.”

Displays of abundance render invisible the desires and needs of those who live and work within apparent plenty. This isn’t a new issue: Jean Toomer, writing in 1923, illustrates the disconnect between agricultural abundance and personal lack in his poem “Harvest Song.” The interplay of excess and lack takes on many forms in all realms of society. Nearly nine decades after “Harvest Song,” poet Andrew Hudgins explores the complexities of desire, greed, and abundance in the domestic and interpersonal sphere. Both Toomer and Hudgins write of hungering in abundant landscapes, whether in vast oat fields or in a friend’s sumptuous home.

Toomer’s “Harvest Song” switches between elevated and plainspoken registers to evoke the mental claustrophobia of labor. The speaker is a reaper who’s “been in the fields all day.” The poem’s stanzas take on a circular structure; at the beginning of each, the speaker expresses a desire or an impulse, but is too exhausted to indulge that impulse: “I am a reaper. (Eoho!) All my oats are cradled. But I am too fatigued / to bind them.” Toomer repeatedly mentions the dustiness of the oat fields in which the speaker labors. His eyes and ears are covered in dust: he cannot hear or see. “My ears are caked with dust of oat-fields at harvest-time. / I am a deaf man who strains to hear the calls of other harvesters whose / throats are also dry.” Though the poem’s title suggests abundance and pastoral bliss, the speaker’s reality is small and barren, his chief remaining sensation a hunger that is mentioned in seven of the poem’s eleven stanzas. Toomer juxtaposes the appeal of the crops (“sweet-stalked / cane”) with the physical deterioration of the speaker, suggesting that the fecundity of the land and the production of even the most basic foods come at the expense of the laborer’s body. Though surrounded by food, he is hungry; though surrounded by fellow workers, he’s unable to communicate; though he wishes to see the vista himself, he physically cannot.

The speaker in Andrew Hudgins’s poem “Grand Expensive Vista” can see the vista that surrounds him, and is both disturbed and enchanted by its excess. The setting and stakes are vastly different: the speaker is at a house party with “electric tiki torches” and “oldfangled canapés.” But like the speaker in Toomer’s poem, the abundance of the setting does not belong to him: “I lingered, / glad—discomfited and glad— / at what my friends’ greed / for beauty afforded me.” For the first three quarters of the poem, he’s trapped within his own head, though not physically alone: “I argued, / self against self, what they’d gained / and lost.” And like “Harvest Song,” “Grand Expensive Vista” is strung with unfulfilled desire. As the speaker takes in the view from his friends’ home, he “nearly groaned / aloud with want.” The poem ends as the speaker smells steak, a literal hunger that amplifies the figurative hunger of the earlier stanzas. In “Harvest Song,” Toomer repeatedly uses “hunger” as a verb (“I hunger”). Hudgins ends by using a similar device in describing the speaker and his host (who appears in the poem’s last lines). “We hungered, / and all the way back to his engorged / glass table, hunger was our guide.”

Both poems explore the pain of hungering and having to hide one’s hunger. Together, they also excavate hunger’s many layers. There is the intense, immediate hunger of necessity, which Toomer’s speaker feels acutely. Then there is the hunger of coveting, less urgent but also intense, that Hudgins’s speaker experiences. Though they are different hungers, they’re both all-encompassing. And though hunger is powerful, it’s also, in these poems, quasi-hidden. In “Harvest Song,” Toomer’s speaker says: “I fear knowledge of my hunger.” Hudgins’s speaker also fears knowledge of his hunger, though he doesn’t explicitly state it: he fears that he has the same desire for luxury as his hosts, the same greed (when he speaks to his hosts, his voice is “greased / with hidden envy”). Both poems show the double potential of hunger and want. Hunger can depress one’s ability to confront excess or make systemic change, but it also can drive individuals to action, whether on the scale of organized labor or interpersonal confrontation. Both poems are affecting because they don’t resolve the problem of the speakers’ isolation and hunger. They capture the moment of rupture between circumstances and desire, and leave the reader feeling claustrophobic in vast expanses, hungering before a feast. Toomer gives the reader a window into the emotional and physical costs of producing staple food, and Hudgins captures the twinge of guilt and powerful want we feel in the face of luxury. Whether we’re driving through cornfields or eyeing brownstones on our walk home, Toomer’s and Hudgins’s poems remind us of the universality of hunger in both of these forms. Their poems leave us ready to question, ready to act.