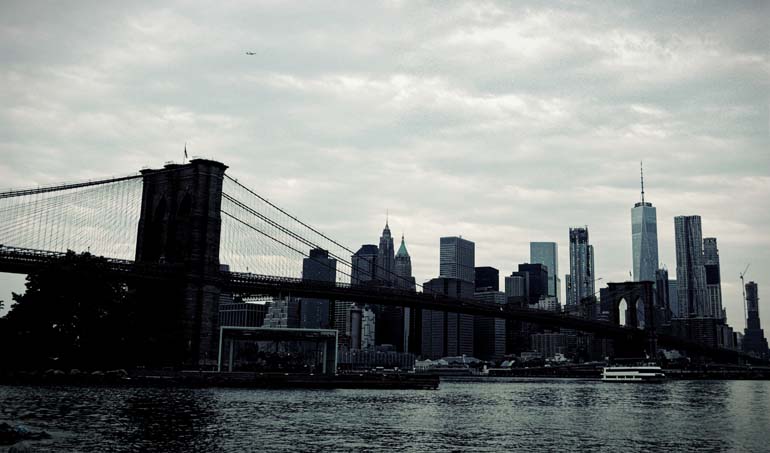 The knowledge of previous happenings in a space lends way to openings for all energies to flush toward you, energies of all sorts. The possibilities are, within a lifetime, boundless—be it a historical monument such as the Eiffel Tower, beneath which one’s parents share a selenium-tone kiss framed in their first honeymoon photo, the only photo remaining after their death; or the dock on the lake behind a family-shared summer cottage where one captured early June lightning bugs at a young age, mason-jarred, holes in the lid, night light beside lofted bunk bed. Going back can mean anything: love renewed, fear overcome, discovery of the unknown, the known first discovered, inspection of the unexpected, betrayed reflections.

For me, a happenstance weekend in New York City involves probing the nooks and crannies of places once roamed by figures who have inspired some of my personal artistic outlets. Names such as Bob Dylan, Jimi Hendrix, and Patti Smith are stamped upon neighborhoods such as Greenwich Village like expiration dates, if you’re looking closely enough. Having read a fair amount by and about these people, thanks to books such as Will Hermes’s Love Goes to Buildings on Fire, the co-authored Please Kill Me by Legs McNeil and Gillian McCain, and Patti Smith’s memoirs (particularly Just Kids), I had a general idea of where to go. I left expectations of what was to be found in Kentucky.

It was hard to start anywhere other than MacDougal Street, home to the world-famous Cafe Wha? where Bob Dylan played his first NYC gig, where Jimi Hendrix was first noticed by Chas Chandler, where a list including names such as Bruce Springsteen, Little Richard, Chuck Berry, The Velvet Underground, and Joan Rivers is now placed outside the front door, notifying incomers of who once frequented this little underground corner of New York (and sometimes still do). Allen Ginsberg is known to have sipped his cocktails here.

It’s no surprise that on this particular Friday night MacDougal and Minetta did not look like the photo of five feeble NYU students filing into a late-night cafe where a shy Hendrix would be performing, having not yet even completely formed the sound for which we now know him. Nor is it a surprise that the street as well as the venue were tightly packed and fully alive, vibrant with tourists and summer students and locals alike. And so, it’s also no surprise that the cozy bohemian neighborhood with its corner cafe, to be occupied by poets and musicians and students and professors and romantics of all kinds, bustles more like a bar strip, the cafe booming like a dance club. The books could not have predicted I was to be seated centimeters from the stage, the chocolate river to my Augustus Gloop fingertips, nor that seeing and touching the relics inside would give me a vague sense of sharing that space with those from sixty years ago. Clearly, what was to be then can no longer be now, a reminder as old as time itself.

When a place like Cafe Wha? goes through decades of historical buildup, it seems as if it will always develop with the times. The surrounding parts of Greenwich Village, with its cafes and bookstores and instrument stores and doughnut shops and all things to and from those sorts, brings to one a brevity of air when they can connect who else has been there before, like history’s inspiration strings giving a slight tug to keep walking. Without having read so heavily about the area, the delight may have ceased with the glowing sunshine and the simple fact of being in a new place and having time to explore it at my own pace. (Perhaps, also, having little to no more than enough cash for food and transportation eliminates unnecessary distractions, and I mean that in the best way possible.)

The reminder was constant at every corner that no matter how inspirational the readings make it out to be, and no matter how enjoyable those streets are to stride, our surroundings evolve with us. It was by accident that I found myself at 315 Bowery one of these nights, and for anyone who doesn’t know, there’s nothing much there to see other than a designer clothing store. But for those who do, a clothing store is worthy of a cringe. CBGB’s was where Patti Smith, The Ramones, Television, The Dead Boys, and too many others brought punk to the forefront, where now little more than a graffiti-splattered wall from the original place is all that is left. In a fleeting moment, I felt the wave of excitement to be standing where they stood, and in another, I was walking away, cursing The Man but not drunk enough to do it out loud or make anything more out of it.

Many things were delightful about having three days to indulge myself within these spaces, to center my energy and allow it to be vulnerable to those from the past as well as the current, to flush together what I’ve read and what I can say I have now experienced, to compare and critique and carry with me after leaving. Of all the more entertaining things, one was the requirement to take the M train in and out of Manhattan, the same one Patti Smith writes about in her second memoir. Needless to say, it’s something far too often said and not done—remove yourself from those pages. There is a dialogue you won’t hear, and it includes your voice, but only if you’re close enough to hear it. Leave behind the expectations you want and the money you know you shouldn’t spend (if you have it). Perhaps, one day, an eager twenty-something-year-old will be taking a photograph outside of the venue you played your first gig, humming one of your tunes, taking with them the same energy you took with you.