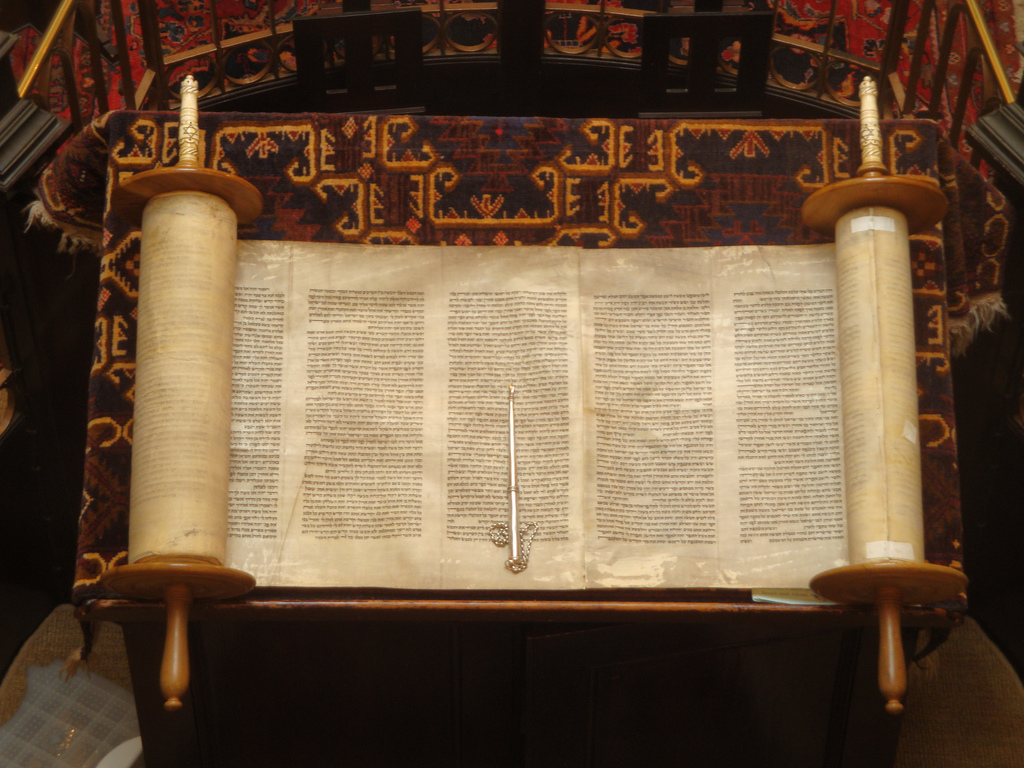 Although I’m not religious, there are days when I wish I could teleport my writing students back for just a few sessions of my childhood religious-study classes. Surely, those teachers who once schooled me in old-fashioned text learning didn’t think they were training me to be a fiction writer.  But they did exactly that—for which I remain grateful.

From kindergarten through eighth grade, I attended a Conservative Jewish day school. My parents weren’t particularly religious, but given my mother’s family background (she was born on the run to Holocaust refugee parents, and much of her family ended up in Israel), she wanted to educate her children to be fluent in Jewish history and culture, and of course in Hebrew. So my brother and sister and I were sent to a school where half of each day was taught in English and focused on secular topics, and the other half was taught in Hebrew and devoted to Jewish study.

The community was made up of mainstream Conservative Jews, almost all of whom were more religiously observant than my family. Being the diligent sort, I was a good student, and for the most part, I loved the stories, the music, and the lessons on both sides of the curriculum. I loved, too, the way we learned to read, and the very layout of the physical pages of the Chumash (that’s the Torah, also known as the Pentateuch–the five books of what Christians call the Old Testament…though my teachers would point out that, unlike Christians, Jews didn’t need a new one).

This—below–is how Torah / Chumash is customarily studied in the original:

Over there in the upper right, in large print, is a bit of text from Genesis. This particular verse and a half, from the chapter in which God first summons Abram (in this passage he’s not yet earned the name ‘Abraham’), can be translated along these lines: “And I will make you a great nation and I will bless you and I will make your name great and you will be a blessing. I will bless those who bless you and those who curse you I will curse…”

That’s all the Torah-text that fits on this page, because the rest of the space is required for commentary. In the pole positions to the left and underneath the main text you’ll find an Aramaic translation by the 2nd Century Onkelos, as well as commentaries by the Hahamim (learned ones) and the beloved 11th Century commentator Rashi. (Rashi’s thinking is so revered that his torqued Hebrew handwriting has been elevated to an alphabet of its own. As a kid, I was required to write essays in Rashi handwriting.) Moving lower and left onto the facing page, the other great commentators each occupy their own real estate: Yonatan ben Uziel, Eben Ezra, Ramban, Or HaChayyim… the list goes on. In each case, the commentator questions: why did God use this particular word and not that one? What is the message behind each specific language-construction… and what bits of Jewish lore are evoked by each phrase? Rashi stakes out individual interpretations of three separate phrases within the “great nation” sentence. Ramban, chiming in from the 13th Century, gets into the specifics of what sort of blessing is meant; Or HaChayyim, speaking up from the 18th Century, draws connections to the wording of the prior verse. Et cetera.

The point here is to suss out the divine intent through close reading. The correctness of the word-choice isn’t in question—what we’re searching for, in this kind of religious reading, is the significance of each word-choice.

I made my way through this education unquestioningly for ages, loving the stories and the language work involved. It made perfect sense to my word-fascinated self to witness how legends and prayers were regularly created in response to the displacement of a single letter or word. (The rabbis, for example, questioned why the word “zachor” is used in one rendition of the ten commandments–remember the Sabbath–while in a repetition of the ten commandments, it’s “shamor”—observe the Sabbath. Clearly, they concluded, this was not an error…God must have uttered the words zachor and shamor simultaneously at Mount Sinai, in a sort of divine speech beyond the reach of human understanding.

I remember, though, an afternoon in seventh grade when I answered the teacher’s question about why God wanted Moses to do something a certain way. I’d done my homework, and I quoted Rashi’s explanation of God’s implicit message to the Jewish people. But as the teacher’s searchlight-focus moved on down the row of students, for just a moment I looked back up from the page, and I scanned the rows of my classmates and found myself thinking: Wait a second. Do they believe this?

Because I didn’t. Not literally.

Or rather, I believed it in a similar way to the way I believed in Hamlet, which we’d spent the morning reading in my English language classroom across the hall. Hamlet was fascinating, flawed, a person who did his best to rise to a challenge but didn’t always succeed. So was Moses. Both were wonderful characters in dramas worthy of minute attention. And to me, both felt equally important to understand.

The fact that I didn’t then see, and still don’t see, any earth-shattering difference between the process of reading the Torah and the process of reading Hamlet probably explains a lot about my views of literature and the world. (Of course one could quibble that Bardolatry is its own religion, with its own theological impulses. The text is assumed to be perfect, and scholars labor to interpret Shakespeare’s meaning. Heresy, in this case, would be to suggest that perhaps the Bard simply chose an inapt word.)

But back to my original point about the potential benefits of a dose of this kind of old-fashioned text study for writing students. If nothing else, a writer is a person who believes in the value of spending hours over a single phrase, all in service of getting it right. In this respect, the kind of minute word-level training involved in religious text study isn’t so far afield from the work of writing. The main difference, of course, is that the work of creative writing replaces the religious search for correct interpretation (with its assumption that the text is perfect, and that we simply need to better understand its intent) with a process in which nothing is assumed to be perfect–plot, characters, form, meaning, authorial intent and capability are all in doubt at every moment. In writing, everything is malleable, everything is questioned… Everything, that is, except the seriousness of putting words on a page. That–the keen focus on every single word-choice—remains.

When I was finalizing the copy of one of my first published stories, the editor commented over the phone that it was refreshing how seriously I took every single word choice. On the main I think she meant this positively (though perhaps not entirely so…refreshing may well have been a euphemism for a pain in the ass. I don’t think she’d expected me to care as much as I did about decisions like the choice between ‘reach’ and ‘grasp’).

Though I made a mental note to henceforth consider any vexing word-choices on my own time and not while on the phone with a busy editor, I couldn’t help laughing internally: she doesn’t know the half of it. I thought of words surrounded by more and more words, commentary proliferating happily like bird-scratch on the page…because, whatever our beliefs, each freighted word of a story deserves our serious attention. My lack of belief notwithstanding, I’d been trained to read with fervor. I realized then that it’s possible to believe in the power of words—all words–with religious devotion.