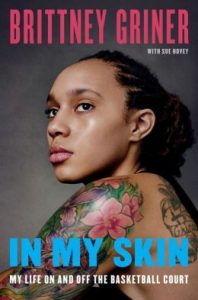 In My Skin
Brittney Griner with Sue Hovey
itbooks, 2014
216 pages

No matter how un-invested an athlete is in the production of their own book—no matter how transparently the ghostwriter has sat down with their subject for as few hours as possible, then hurriedly stretched the transcribed interviews into something like a narrative in as few weeks as possible—a book is always long enough that something meaningful-feeling about the athlete’s true self feels shared, even if—especially if—done so unwittingly. The resulting portrait can be wickedly unflattering. Sacrifices endured and relationships suspended in pursuit of victories can fade, chapter by chapter, from the dedicated to the maniacal. The athlete’s account of perceived slights and hardships can betray a tectonic-sized ego, a self-started requirement to be eternally pampered.

Fortunately, there’s a healthy proportion of athletes—in this way sports is just like any other business, or any other slice of the world—who can’t not be cool people, who induce your sympathies just by presenting themselves. Brittney Griner, 6’8” wunderkind of women’s basketball, shows herself to be one of the latter types of athletes in her 2014 memoir, In My Skin—even though her career has endured enough scandalous downs you’d think, just to follow the headlines, that she’d be one of the former.

Griner’s singular goal, unfulfilled as of yet, is to feel fully accepted as Brittney Griner by friends, family, the public. Her entire basketball career—started almost accidentally at the beginning of high school—feels, in the book, like it almost slides by in the background of a much broader and universal story of a girl growing into a woman and looking to be loved. Which, come to think of it, is probably exactly how Griner’s basketball career has felt to her.

It would not, in a better world, be very difficult for Griner to find acceptance. In addition to that prodigious basketball talent—one forgets that Griner could credibly claim to be best in the world because she never bothers to—Griner is a bundle of ultimately very tiny deviations from the norm (whatever the hell “the norm” means): deep-voiced, rider of longboards, wearer of so many tattoos, prodigious eater of candy, lesbian.

That last trait has proven to be an unfathomably tall hurdle for Griner to clear. In My Skin veers poignantly close to tragedy whenever Griner’s father is onstage. After making Griner spend basically her whole after-school adolescence in her bedroom in an extended overprotective paranoid fit, the elder Griner draws up a hair short of disowning his daughter when he discovers her sexuality, even though Brittney had been out to friends and even her mother for years.

The fight continued at Baylor University, for whom Griner was the best player on the 2012 championship-winning team. Baylor is a private university with formally written codes that attempt to legislate homosexuality out of the student body—but manage to never mention it to Griner during their extensive recruiting process. While Griner enjoyed her time at Baylor, she doesn’t hesitate to point out the obvious double standard:

“The more I think about it, the more I feel like the people who run the school want it both ways: they want to keep the policy, so they can keep selling themselves as a Christian university, but they are more than happy to benefit from the success of their gay athletes. That is, as long as those gay athletes don’t talk about being gay.”

Ultimately, though, I feel that it’s an even more basic trait of Griner’s than her sexual orientation that has prevented her from being a universally celebrated athlete: being a woman. Audacious behavior that we classify as entertainment when coming from male athletes—i.e., “looking so powerful” when dunking the ball—fills Griner with self-consciousness. The female athlete, it seems, remains unable to simply pursue the upper reaches of their potential: they still must wear the conservative corset of Role Model, each career move and publically disseminated tone necessarily calibrated to wholesomely uplift the next generation of female athletes in only the most focus-group-approved-of ways. (The continued existence of women’s professional sports, never not operating on the profit margins, may or may not depend on these encouragements.)

This is only a problem for women athletes who didn’t emerge from the womb with genetics that predestine portraits on the front of Wheaties boxes. In reading Griner’s book, I’m reminded of the operatic tragedy of Chamique Holdsclaw, the transcendent collegiate player from the turn of the century who spent her professional career locked in battle with mental illness. In the same way that Holdsclaw’s difficult childhood hardly helped her for her turn in the public eye, it’s possible to find some of that poisonous disapproval from Griner’s father seeped in Griner’s romantic relationship with WNBA opponent Glory Johnson. This spring, Griner and Johnson, then engaged and since broken up, were both arrested when the police were called to break up a fight in their home.

From a more monolithic and, well, male sport, responding to an incident of domestic violence is high time for blustery public relations blabber. From Griner, though, there has only been regret, sorrow, acceptance of responsibility. Does this mean that Griner isn’t a role model? I don’t think so—I think it just means that Griner isn’t perfect. In fact, I think Griner is a rare role model in that she has been forced to deal intimately with so many of life’s imperfections, and still only aspires to be the best possible version of herself.