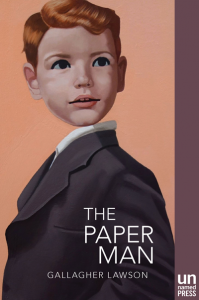 A man with a papier mâché body and hair made of yarn attempts to break out of his protected, isolated, and stagnant life and escape to an unnamed city. On the bus, a one-eyed man steals his belongings. Caught in a scuffle, the paper man’s arm tears, and on his own for the first time, he faces the menace of rain, which could turn him to pulp. A mermaid lies dead on the sidewalk and an unemployed fur model who collects (and smells of) mushrooms takes him in. Even this strange world full of outsiders is, it turns out, a dangerous place for a man made of paper, forcing him into dependence on others, vulnerable to becoming their “project,” made and remade by them.

This is the somewhat surreal and dystopian premise of Gallagher Lawson’s The Paper Man, in which lines between life and art and art and politics are not always clear. Part Frankenstein, part Pinocchio, attracting comparisons to Kafka’s Metamorphosis, The Paper Man resembles magical realism in its pairing of fantastical elements with a matter-of-fact, even earnest, tone. Michael, once human but rebuilt and reanimated by his artist father after an accident, evolves in the course of the story from creator to creation to creator again, constantly blurring life and art. Originally named Michaelangelo, becoming an objectified outsider fixed up, torn down, and re-created again by others, he is renamed David. Then, gradually if uneasily and somewhat horrifyingly, he triumphs over his own creation, Adam.

In an often nightmarish narrative in which every element feels representational, a stand-in for something else, a Symbol with a capital S, thematic with a capital T, there are moments that I wished Lawson had followed the advice of Michael’s sadistic childhood friend Mischa: “Stop thinking and feeling so much and just do your art.” But ultimately, this is a compelling story that sticks with the reader, examining art and its creation from a dizzying variety of angles and raising fascinating questions about ownership, celebrity, autonomy, the limits of self, and the essence of our humanity.

Lawson’s dark vision proves both intriguing and disturbing, partially summed up when one
character says to another, “Creativity is nothing more than transferring emotions, mostly
anxiety and fear, to the outside world.” But, of course, ultimately it is more than that. This is an unusual story about art’s costs and its capacity for exploitation, political influence, and profound change–and for its ability, finally, to humanize.

Nancy McCabe is the author of four memoirs, most recently From Little Houses to Little Women: Revisiting a Literary Childhood. Her creative nonfiction has appeared in Prairie Schooner, Gulf Coast, Fourth Genre, Newsweek, and many other magazines, won a Pushcart, and six times made the notable lists of Houghton Mifflin Best American anthologies.