Home
»
Reading
»
Sci-Fi Suggests That We Can’t Run Away From Our Problems, Even If We Go to Space 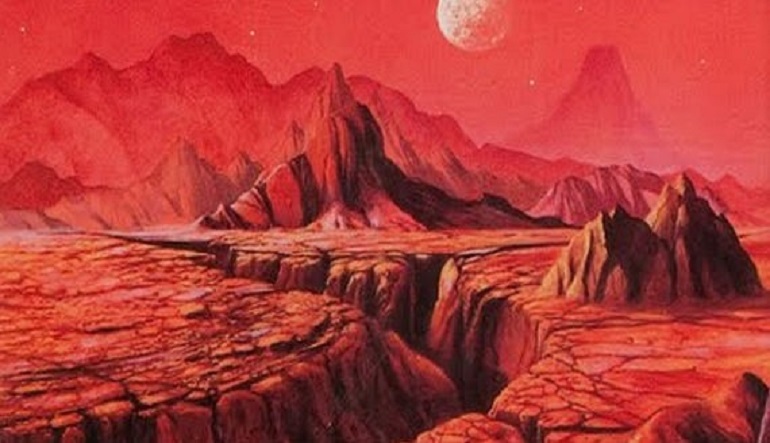 Last week, Elon Musk shared SpaceX’s vision to put humans on Mars and eventually start a colony. Colonizing Mars is an appealing idea, especially among those, such as Stephen Hawking, who believe our future as a species relies on our ability to become interplanetary. In science fiction, off-Earth colonies often have disheartening results. However romantic it might seem to start over on a new world, space colonies in science fiction rarely end up being functional, much less utopian. Humans bring human problems with them wherever they go, particularly when it comes to dysfunctional governments and bureaucratic red tape.

In Ray Bradbury’s 1950 book The Martian Chronicles, humans flee Earth for the Red Planet to avoid nuclear war. Given that atomic testing was first conducted in the U.S. in 1945 and that the Red Scare and Cold War were in full swing, Bradbury’s premise reflected common fears, including suppression and persecution.

In “Usher II,” a story with countless references to Bradbury’s hero Edgar Allen Poe, Stendahl escapes Earth because the government has begun to censor ideas, literature, and other art: “’They lined them up, St. Nicholas and the Headless Horseman and Snow White and Rumpelstiltskin and Mother Goose…and shot them down, and burned the paper castles and the fairy frogs and old kings…. The Beanstalk died in a bramble of red tape.’”

On Mars, Stendahl creates a house that serves as homage to Poe and to literary imagination. He relishes in manufacturing dark delights, yet he knows he won’t escape detection from Earth. Stendahl murders representatives from the office of “Moral Climates”—a government division that enforces morality and ideology—and replaces them with robotic doppelgangers to cover his crimes. Stendahl kills the final member by luring him into the basement and walling him in alive, ala Poe’s “The Cask of Amontillado.” Even though he knows he can’t beat bureaucracy in the long run, Stendahl revels in the irony of Garrett’s murder: “‘do you know why I’ve done this to you? Because you burned Mr. Poe’s books without really reading them…Otherwise you’d have realized what I was going to do to you when we came down here a moment ago. Ignorance is fatal, Mr. Garrett.’” At the end of the story, Stendahl flees and the house cracks into pieces, falling like the house of Usher.

In Kim Stanley Robinson’s Red Mars, the first book in the Mars trilogy, overpopulation and environmental concerns prompt humans to settle Mars. The book addresses not only the technological challenges of such an operation, but also the ethical ones, particularly regarding whether humans should alter Mars’ environment and ecosystem—a question that leads to factions on both Mars and Earth. The colonists don’t get to make decisions about the fate of the Red Planet—that’s left to UNOMA, the United Nations Organization Mars Authority. But the colonists do play a role in influencing opinion, largely because they’ve become television stars (not unlike the Mars One’s funding plan), thanks to video footage. As with reality shows, these glimpses into the lives of the colonists makes viewers think they know what’s best:

“The debate, was not, of course, confined to Mars. Position papers were being churned out by policy centers in Houston, Baikonur, Moscow, Washington, and the U.N. Office for Martian Affairs in New York, as well as in government bureaus, newspaper editorial offices, corporate board rooms, university campuses, and bars and homes all over the world…. [T]he colonists’ disagreement about it were played out on the largest possible public stage.”

UNOMA votes to begin terraforming efforts, which consist of drilling into the ground, releasing chemicals into the air to thicken the atmosphere, and using nukes to access water trapped in the permafrost.
Earth can’t keep its fingers out of the Martian pie and reinforces the connection between the two worlds with a space elevator that facilitates terrestrial control. Getting out from under Earth’s thumb proves impossible, particularly when immigration to Mars increases. On Earth, a consortium of international corporations (known as transnats) usurps UNOMA and sends troops to Mars. The colonists resist, but the troops retaliate with violence, flattening cities and destroying Mars’ moon Phobos.

“‘Now comes the U.N.’ Frank said. ‘At best.’
‘Do you think we ought to…’ Maya said. ‘Do you think we’re…’
‘Safe in their hands?’ Frank said acidly.
‘Maybe we should take to the planes again.’
‘In daylight?’
‘Well, it might be better than staying here!’ she retorted. ‘I don’t know about you, but I don’t want to just get lined up against a wall and shot!’
‘If they’re UNOMA they won’t do that,’ Sax said.
‘You can’t be sure,’ Maya said. ‘Everyone on Earth thinks we’re the ringleaders…”
Sax said mildly, ‘Someone may have decided things will be easier to control without us around.’”

Transnat doesn’t want to help the colony thrive—it wants to control them and life on the Red Planet. The Mars trilogy continue to explore the question of Mars’ sovereignty, with yet another organization stepping up to assume control—and some of the surviving colonists hiding in a secret colony, hatching plans.

Robert Heinlein’s 1966 book The Moon is a Harsh Mistress tells the story of a former penal colony on the moon. The book opens with a meeting of “Loonies” who oppose their colony’s control by the Warden, Earth’s Protector of the Lunar Colonies, but who aren’t yet ready to act: “All Loonies despised Warden and cheated Authority. Didn’t mean they were ready to fight and die. If you had mentioned ‘patriotism’ to a Loonie, he would have stared—or thought you were talking about his homeland…. We were as non-political a people as history ever produced.”

The Loonies are forced to get political when they realize how depleted their water reserves are due to the wheat they grow and export to Earth. When confronted by the realization that they exist only to enhance life on Earth, the Lunar citizens overthrow the Warden and declare independence. Such a declaration is meaningless unless others recognize it, so Lunar representatives Mannie and Wyoh head to Earth and make the case to the Federated Nations that a free Luna would benefit all. They suggest that Earth supply Luna with water in exchange for grain and are thrown in jail: “they treated us as a cross between naughty children and criminals up for sentencing.” Once released, they travel around Earth securing some support for their independence and then return to the moon for Earth’s campaign to recapture the colony, which forces Luna to perpetuate Earth’s legacy of war. After a bloody battle, Earth agrees to recognize Luna’s independence.

Mannie and Wyoh become the leaders of Luna, but they don’t want to be:

“Seems to be a deep instinct in human beings for making everything compulsory that isn’t forbidden…Are food riots too high a price to pay to let people be? I don’t know. Don’t know any answers…A few young cobblers have gone out to Asteroids. Hear about some nice places out there, not too crowded.”

A society can’t really be free if someone—anyone—is in charge. Heinlein suggests that only in the lawless lands of new frontiers can liberty truly exist.

No matter where humans go, they’re still human. While they might seek autonomy, they also seek rules that establish their dominance, their right to goods and services, or their safety. If rules exist, people will challenge them. Bureaucracy inevitably threatens freedom, and conflict follows—even to the far reaches of the universe.