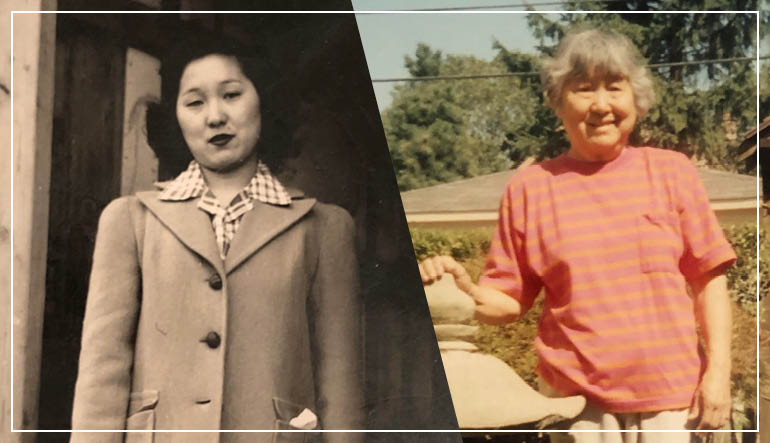 When my grandmother was a girl, she slept with a knife underneath her pillow. The soft brutality of this detail rushes to the forefront of my mind every time I recall her face. I’m pulled in by the image of her small, girl body atop soft sheets, afraid but ready to fight. My mother, who learned about the knife from her uncle, never asked my grandmother about it. If she had, what more would there be to say? To clutch a knife is to wield both fear and power. To sleep with a knife is to risk sending the blade into the wrong body. When my grandmother was twenty years old, she, along with her mother and six brothers and sisters, was sent to Heart Mountain Concentration Camp in Cody, Wyoming. Here, she was forced to live for nearly three years simply because she was a Japanese American citizen, and the country was afraid. She rarely talked about her life there, but I know at least some of her time was spent working for the camp newspaper, the Heart Mountain Sentinel. My grandmother had stopped sleeping with a knife by the time she got to camp, but her dedication to the newspaper suggests that perhaps she traded it in for something else. I think about the mighty pen, I think about a sword. Once, my grandmother was a girl with a knife underneath her pillow. Once, she was a woman with words.

When I discover that every issue of the Heart Mountain Sentinel can be read online through the Library of Congress, I gasp. It feels like discovering a long-lost but much-needed key tucked away in a velvet box. I read the first issue closely, learning that the paper aims to establish a “free and watchful press,” and that the first copy has been sent all the way to Washington, D.C., a gift for President Roosevelt. I browse through a bible study schedule and scan an ad for a sale at the camp store where a dozen “sweet, ripe D’anjou pears” cost 39 cents. There’s an article with suggestions for turning the dismal barracks into livable homes with “just a little ambition and imagination”; it describes how a person can make stylish chairs “fashioned out of orange boxes draped in striped denim.” I am startled by the seeming dedication to making the best out of a horribly unjust situation. Some opinion pieces, though, are harsher in their descriptions of the camp, referring to the shoddily crafted barracks as “tar-paper match boxes” and balking at the drastic weather, with temperatures ranging anywhere from 100 degrees Fahrenheit to 35 degrees below zero. “One year ago today there were no such things as assembly centers or relocation centers. There were fair grounds and race tracks and Japs—but they were all far apart,” one writer reminisces. I wonder who penned these words, and I try to find traces of my grandmother within the sentences. Later I will learn that the Sentinel didn’t believe in by-lines unless a piece was deemed “meritorious” enough to have one. Still, scouring through the first issue I try to pair what is recorded there with the image of her. I think of how her home always felt cozy, as if a chair could have been an orange box could have contained a life. The 1940s hold a version of my grandmother that has felt out of reach for decades. I want these papers to recreate her body so she stands before me, entirely revealed.

At first, I believe reading about daily life at Heart Mountain will be enough to understand her, but soon I’m scanning every article searching for her name. Since I don’t know what her job was on the paper, I find the lack of by-lines frustrating. Every sentence has the potential to be hers, and I’m dizzy with the hundreds of possibilities. I realize what I’m really searching for isn’t just a better idea of what life was like for her back then, but a way to enter her mind. One article describes lipstick as a “red badge of courage,” and I think about the handful of ruby red lipstick tubes that I used to take out from her top vanity drawer and unwind to their full extension. How can I know if wearing lipstick made my grandmother feel brave when the author of every article stays hidden behind a heavy, unmovable curtain? Eventually, I am almost through the entire first year of the paper, and I have still not found a single trace of her. I begin having reoccurring dreams where I’m in her basement digging through her things, searching. I sift through scraps of fabric. I run my hands through drawers of jewelry. I’m afraid that if I make it through the entire three years’ worth of issues without a single mention of her name, my grandmother, this strong, beautiful woman, will be lost to history, unnamed and eventually forgotten.

The grandmother that I know was luminous. She wore handmade aprons with large front pockets where she often kept a house key tied to a small sleigh bell. Her kitchen was small but picturesquely warm in the winters and drowsily peaceful in the summers. Placed on the table often were gifts from her garden: bowls of fresh cherry tomatoes and vases of fat, dreamy peonies. She loved her nephew’s homemade chocolate cake and the occasional ice cream cone. She hated the movie Fargo but loved to watch Korean soap operas and the CBS reality show Big Brother. When I was a child, she often gifted me half-pound bags of cherry gummy candies purchased from the candy counter in the basement of Marshall Field’s. Underneath an end table in her living room, she kept a giant glass bowl of seashells collected by her on a trip to Florida, and over her kitchen sink hung a needlepoint sign that read, “There’s no place like home, except Grandma’s house.” I remember her in her garden, silently shifting amongst the plants, gently redirecting bumblebees with a forgiving wave of her hand. In the back corner of her yard, a delicate Japanese lacy maple grew over an empty koi pond, and a tall, stone toro stood sentinel near the edge of the path. When she died, my mother and aunt found a journal she kept during the last few good years of her life. In it, she talks about the weather, her health, and her garden. On a particularly windy day she writes, “The stone toro is still standing in the garden by the pond. I’m sure it will be there forever.” The toro is gone now, moved instead to my uncle’s backyard where it continues its watch, but I am curious about her idea of permanence. I interpret my grandmother’s silence about the camps as a conscious refusal to make permanent this part of her life, but her journal suggests she was dedicated to remembering some things, understood even that something as durable as stone had the power to exist for eternity. Still, her stories about Heart Mountain remain trapped within unbreakable rock. The incarceration is a stone toro I have lifted from her backyard and placed tenderly, and without permission, in my own. I chip away at the rock and worry I’m disturbing the bones of the dead. Any moment now, she will appear in front of me shouting at me to stop. Shikata ga nai! she will say. It can’t be helped. I keep digging. I feel the weight of her ghost reading over my shoulder.

When I eventually find her, it’s by accident. I have been combing through the final issues of 1942 when I Google her to confirm her date of entry into the camp. I’ve done this dozens of times before, but today, what appears in my search results is an article from the Sentinel, her western name in bold. I had wanted to come upon her chronologically, choosing to read through each issue from the beginning in order to immerse myself into her world more fully. But now she is here, Pat Ikebe, on page 3 of the June 10, 1944 issue. She is listed as being in attendance at a fortune-telling event held the previous Monday. Suddenly, her grandmotherness disappears so she is just Pat, a young woman amongst many, girlishly searching for good fortune. Seeing her name feels like secretly watching her through a picture window. She becomes a new woman then, no longer dependent on me to shape her.

The grandmother I didn’t know was luminous. In the end, I find her name nearly twenty times within the pages of the Sentinel. Not only did she work as a reporter, but she was also the society editor for a month and a half before she left the camp for good on March 16, 1945. Her name is usually always on page 3, listed amongst the social gatherings held every week. She attended many Sentinel parties and was often in charge of buffets and refreshments. She had a strong presence in the camp’s U.S.O. program, and, before she left, she received a pin for providing 100 hours of community service. In the June 3, 1944 issue, she is listed as having attended a Sentinel picnic at the Shoshone river where she was inducted into the all-women reporter’s club of Brenda Starrs. Her last appearance is in the March 17, 1945 issue: she was “honored at a hamburger feed” put on by members of the paper, and celebrated at a farewell party the Thursday before her departure. Bridge and fortune-telling are listed as the “diversions of the evening.” My grandmother went on to have a robust yet modest life. She filled it with flowers, and family, and dedication to her church. She allowed herself wonder and laughter despite the darkness of her past. If she hoped for anything all those moons ago when she was 23 years old, palms outstretched as she waited to hear her fortune, perhaps it was just that. I had hoped to gain more insight into my grandmother’s feelings about the camps by reading her articles, but the lack of by-lines means they’re still unknown to me. Working for the Sentinel seems to have been a way for her to confront the present moment, but whatever she felt during her time at Heart Mountain, she did not bring it with her into the future. Instead, the camp became a ghost—something ethereal, but not entirely forgotten.

Finding my grandmother’s name in the Sentinel was like cracking open a rock to find a perfectly preserved geode inside. Her life at Heart Mountain emerged from the pages like a precious, crystalline cave. I cannot ever know her full story. That disappeared with her. But I can crawl into this cave, this space her name has carved out for herself, and I can bring in the light. Often, in the winter, after a shower, my grandmother would have to run back to her barrack in freezing temperatures. Sometimes it would be so cold that in the time it took for her to get from the shower to her house, her wet hair would be frozen into stark icicles. I am reaching into her past and asking her to break one off for me, a blade of ice and hair. I’ll carry it with me. I’ll store it with my little pens. I’ll keep it under my pillow, one hand formed around it in a fist, just in case.