Home
»
Uncategorized
»
Series Junkies: We Are All “Loving Tyrants”

What to do when, as a writer, you’re ready to move on from a world you’ve created, but your fan base is not? L. Frank Baum, the originator of the Oz world and all its charming characters, had exactly that experience.

It goes like this. Beginning in 1900, he put out, roughly, a book a year in the series: The Wonder Wizard of Oz, The Marvelous Land of Oz, Ozma of Oz, Dorothy and the Wizard in Oz, The Road to Oz and The Emerald City of Oz. In 1910, with what he saw as the final book in the series, Baum had the oh-so-good witch Glinda turn Oz invisible, cutting it off from the rest of the world. As the Oz Historian, Baum no longer had access to the world his readers demanded. He was (he now assumed) free to pursue other ideas.

But the “loving tyrants”—his term of endearment for his young readers—had other plans. The new story series he pitched didn’t sell half as well as his Oz worlds.

In 1913 he surrendered and presented his tyrants with The Patchwork Girl of Oz, an adventure involving Ojo, a young munchkin gathering mysterious ingredients for a potion that will save his accidentally-turned-to-stone uncle. Aided by a girl made of patchwork scraps, a glass cat and a few Oz familiars, the story has Baum’s usual mix of magic, adventure, lesson-learning and highly imaginative elements. 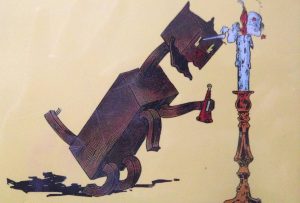 My favorite is this guy, Oz’s only Woozy (at left).

Not surprisingly, Baum’s book sales zoomed up again. So he went back to writing his Oz books. His last book, Glinda of Oz, was published posthumously in 1920. After that, a handful of other writers took up the mantle. By the time the final book in the canon was released, in the 1960s, four different writers had penned a part of Oz. Now, more than 100 years later, say “Oz” and you’ll rarely meet a blank stare. 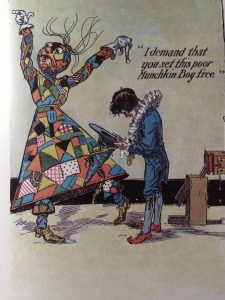 There are plenty of reasons Baum’s “loving tyrants” consumed his work so furiously, of course—chief among them that they balanced familiar, well-loved characters with the constant stream of fresh and new material from Baum’s imagination.

It’s also easier, perhaps, to give in to this kind of serial love early. Remember The Lion, Witch and the Wardrobe, Indian in the Cupboard, Anne of Green Gables, or even R.L Stine’s Goosebumps collection? If you read and liked one, there were plenty more to gobble up after. After all, you likely had lazy summer days that stretched ahead of you to get all that reading done.

But you probably grew out of it. And, if you’re reading this blog, you probably became a serious reader or writer along the way, too, which meant you needed to be reading DeLillo or Dostoyevsky. The idea of a series came to seem something a little “less than.”

Or maybe that was just me. Either way, I forgot all about the feelings associated with the series’ I had loved as younger gal, until a Serious Writer suggested I read Girl with a Dragon Tattoo a couple of years ago. And when I finally did get around to reading it, I couldn’t stop. Immediately, I was staying up way past my bedtime, reading on my lunch break. I remembered that feeling from childhood, of being utterly consumed—I had loved that feeling. I found comfort knowing that I’d connect with these same characters several more times before I had to give them up forever.

When I finally came up for air after finishing all three of Stieg Larsson’s books, I  took a new look around the reading world. America, it seemed, was loving series work, even if I had been ignoring it. There was the popularity of Jan Karon’s Mitford in early the 2000s, and more recently Twilight, Girl with a Dragon Tattoo, Hunger Games, and plenty of others I’m just now learning about. It’s even catching on among the literary: Justin Cronin was an Iowa grad and award-winning novelist before his vampire trilogy took a bite out of the world in 2011.

And while some series may have more page-turning aspects then others, the common ground is that we are deeply connected to the worlds in each of them—an important aspect of any reading experience. So when we feel assured we’ll have that opportunity more than once, we’ll gladly take it, forking over money, too!

“Loving tyrants,” like the ones Baum knew so well, weren’t born that way. They were—and are—made. Captivate us and we may very well be yours forever.