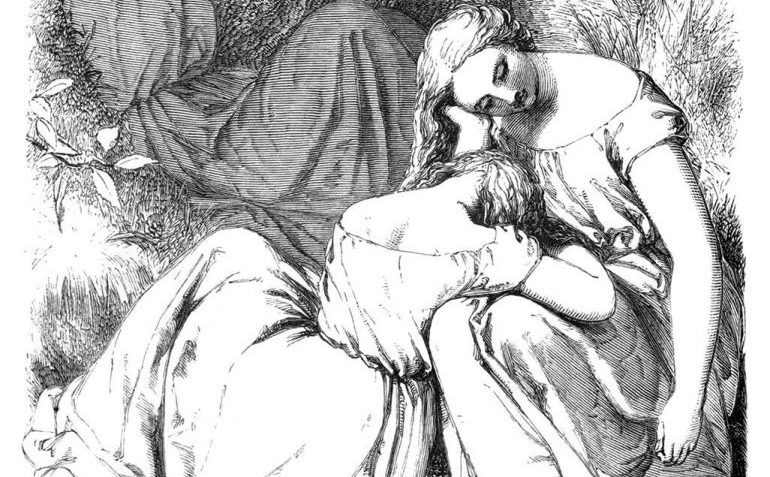 Early in Sally Rooney’s Conversations with Friends, Frances wakes up in the middle of the night, sweaty and confused, aware only of a terrible “wrenching pain.” In this disoriented, heightened state, she recognizes her pain as significant: “I was exhilarated by the seriousness of my pain, like it might change my life in an unforeseen way.” Frances makes her way to the bathroom, bending her body in half and clutching her abdomen, and she realizes the pain is familiar and expected: “I was bleeding. It was just period pain.” By the end of the novel, though, Frances realizes that it isn’t “just period pain,” and the seriousness of her pain does change her life—her pain and her diagnosis affect her sense of self and her relationships—in particular, her relationship with Bobbi.

Bobbi and Frances are university students in Dublin. They dated during school, and now remain close friends and perform spoken word poetry together. At one of their performances, the young women meet Melissa, a locally famous photographer and writer, who invites them back to her house where she lives with her actor husband Nick. After this first meeting, Bobbi tells Frances that she’s attracted to Melissa; Nick, as he explains to Frances later, “warmed” to her right away. The overlapping desire between these two pairs unfolds as they meet at literary events around the city and the older couple invite their new friends to their home, their parties, and, eventually, their trip to France. Though Melissa and Bobbi immediately connect, it’s Nick and Frances who, in secret, have an affair, meeting mostly on the rare occasions Melissa is out of town, and talking daily. This talking propels the building and breaking of the book’s central relationships that occurs as both Bobbi and Melissa learn of the affair.

Much of the talking between Frances and the other characters occurs through digital means—IM, text, email—and Rooney incorporates these modes of communication into the narrative. While dialogue appears without quotation marks and often without tags, these digital messages are marked as distinct from the rest of the story. They are produced in blocks of indented text, in a different font. When Frances is seized by pain in the middle of the night, however, there’s no font change, no technology. Bobbi is in bed asleep beside her, and Frances says her name aloud—first as question, then in two pleas, before walking to the bathroom alone. Though she doesn’t stir during when Frances speaks to her, Bobbi wakes up during Frances’ absence, and knocks lightly on the bathroom door. Frances doesn’t open it. Instead, Frances and Bobbi converse lightly through the door; Bobbi, learning that Frances is experiencing period pain without having taken any painkillers, slides some underneath the door in shared, comforting silence.

The silence here stands out. In a novel comprised of near-constant digital communication, the intimacy between Frances and Bobbi is most apparent in these quiet moments, which are also, most often, moments in which Frances is experiencing pain.

When Frances experiences menstrual pain again, her relationship with Bobbi has become strained by their respective relationships with Nick and Melissa. Frances is home visiting her mother when she’s gripped with intense cramps. This time, it’s not just the pain, but also the blood that has soaked through layers of clothing that alarms her:

I noticed that along with the blood were thick gray clots of what looked like skin tissue. I had never seen anything like this before and it scared me so badly that the only comforting idea I could think of was: maybe it’s not happening. […] I let my hands tremble and waited to start feeling normal again, until I realized that it wasn’t just a feeling, something I could dismiss to myself. It was an outside reality that I couldn’t change. The pain was like nothing I had ever felt before.

The physical description of the blood is jarring for the reader as well as for the character. Its excess is unsettling; the “thick gray clots” do sound scary. This confrontation of the physical prompts Frances to recognize the severity of her pain as “an outside reality that I couldn’t change.” Though Frances doesn’t say so here, it’s clear that she suspects this “outside reality” is more than menstruation, the wrenching in her abdomen more than typical period pain. Recognizing that she needs help, Frances reaches for her cellphone to call her mother, just downstairs, who takes her to the hospital.

While there, Frances calls Nick, who speaks to her in angry, chastising whispers—“What are you doing calling me like this?” “Are you trying to get me in trouble?”—before she hangs up, unheard and uncomforted. Her mother, like the doctors at the hospital, wonder if Frances is pregnant and experiencing a miscarriage. Nick doesn’t hear enough to understand that Frances is in pain at all. He thinks she’s drunk, slurring her words. After she hangs up, he sends her a text message consisting only of question marks, which isn’t produced in the text but indirectly recounted in Frances’s narration. She types out a reply and then deletes it, ultimately leaving Nick’s message unanswered. More substantially than the door between Frances and Bobbi, technology inserts a distance between Frances and her mother, and even more so between Frances and Nick. Wordless exchanges through text and email aren’t communication; the meaning in those silences isn’t shared.

After Frances comes home from the hospital, she calls Bobbi to ask if they’re still friends. The conversation is awkward, with loaded pauses where they take turns not commenting on Melissa and Nick. But Frances does tell Bobbi about the hospital and her upcoming ultrasound, and she opens up about her feelings for Nick. When Bobbi suggests Frances might talk to Nick more than she talks to Bobbi, might tell Nick more, Frances corrects her. “No,” Frances tells Bobbi, “Less than you.” Even if Nick and Frances exchange many emails and IMs, Frances still shares more with Bobbi, in messages, conversations, or silences in between—at least for now.

Earlier in the novel, Frances reflects on long, intimate conversations that she and Bobbi had while they were together:

After school we used to lie in her room listening to music and talking about why we liked each other. These were long and intense conversations, and felt so momentous to me that I secretly transcribed parts of them from memory in the evenings.

By transcribing these conversations, though partial and from memory, Frances has recorded the details of their relationship so she could examine them. Later, before their break up, Frances had saved all of their texts, emails, and IMs, too. The impulse to collect the textual evidence of their relationship prioritizes the transcript over the conversation, the analysis over the moment.

After she tells Bobbi about the ultrasound, Frances opens a file of her messages with Bobbi: “It comforted me to know that my friendship with Bobbi wasn’t confined to memory alone, and that textual evidence of her past fondness for me would survive her actual fondness, if necessary.” Frances reads bits of the massive text file, searching for topics like “love” and “feelings,” mining for moments of affection. Incidentally, this mining pulls up snippets of conversations that remind Frances of carefully constructing her arguments for Bobbi or of suspecting that Bobbi might be purposefully misinterpreting her messages, willingly using the technology as a barrier to understanding. Frances is preoccupied with analyzing her messages and exchanges with those around her throughout the novel. She doesn’t linger on the meaningful silences she and Bobbi share in person. This makes those quiet moments significant—unlike the rest of their relationship, these moments aren’t revisited or reviewed.

Months later, Frances learns the cause of her intense pain is endometriosis. Frances doesn’t share this diagnosis with her mother or with Bobbi, because Frances is reluctant to share what she believes is “mundane suffering.” Instead, she begins recording her symptoms­ in a notebook—pen on paper, not a file on her computer. After fainting from “radiating” pain one night, Frances emails Bobbi, reflecting on their entangled relationships with Nick and Melissa and telling Bobbi that she still loves her. In the email, Frances suggests that Bobbi will respond to correct her theoretical interpretation of the complicated foursome or she won’t respond at all. But she still asks, “Is it possible we could develop an alternative model of loving each other?”

Bobbi doesn’t respond; instead, she arrives, quietly “unzipping her raincoat” before telling Frances simply that the email was strange, and she loves Frances, too.

When Bobbi and Frances resume their romantic relationship, Bobbi is only sporadically in touch with Melissa, and Frances has stopped speaking to Nick entirely. In their shared student apartment, in the middle of “conversations that spiraled out from observations into grand, abstract theories and back again,” Bobbi and Frances deem getting so involved with the couple a mistake. They discuss their break up years ago, their friendship since; notably, though, Frances and Bobbi do not discuss the ultrasound or Frances’ endometriosis. Frances still hasn’t shared her diagnosis with Bobbi, because she felt she “could keep the sickness outside of time and space, something only in my head.” The pain caused by Frances’s endometriosis, however, can’t be kept “out of time and space.” Because it is consuming and unpredictable, Frances learns to prepare for it at all times. She stores boxes of painkillers in her top drawer, which she keeps a secret from Bobbi:

This top drawer seemed to signify everything that was wrong with me, everything bad I felt about myself, so whenever it caught my eye I started to feel sick again. Bobbi never asked about it.

Here, the silence doesn’t appear to be shared anymore, as Frances doesn’t explain and “Bobbi never asked.” But unlike Nick’s unanswered text messages or the miscommunications apparent in the log of Frances and Bobbi’s messages, the presence of the painkillers is physical and, therefore, unavoidable. Frances and Bobbi acknowledge Frances’ pain without discussing the details. In this way, Bobbi’s silence is a means of supporting Frances. The stash of painkillers in the drawer that sits between Bobbi and Frances, too, mirrors the first depiction of Frances’s pain, the moment of shared silence as Bobbi wordlessly, lovingly slides painkillers underneath the door to Frances.

These wordless acts of love that help alleviate pain, the intensity of conversations that build relationships, the depth of feelings that complicate them—Rooney makes it clear that these meaningful silences aren’t captured by the texts, emails, and messages in digital communication. When Frances and Bobbi resume their romantic relationship, Bobbi is reluctant to categorize their commitment to each other and adamant that she is not Frances’s girlfriend. To diffuse the pressure to define their relationship, Frances and Bobbi develop a joke about definitions of love and friendship, of talking and communicating: “what is a friend? we would say humorously. What is a conversation?”