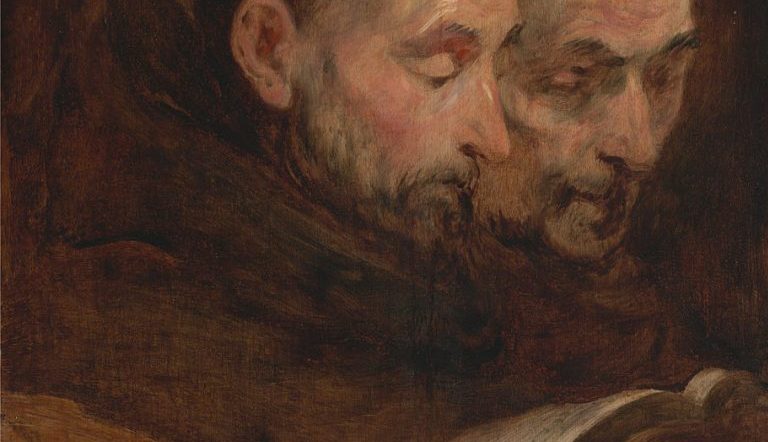 There’s nothing like those years when you don’t yet have what you are working for. There’s a lot of freedom because there’s so much possibility. You need friends who are working for something, too…Everything starts with an all-night conversation. Find a spiritual twin to walk the city streets with, to waken the dawn with, to construct a world with. — Anna Deveare Smith, Letters to a Young Artist

Find yourself a teacher, and get yourself a friend. — Pirkei Avot (the Mishna)
We think of writers as solitary laborers of the mind. Yes, there are communities and trends and movements and friendships, but ultimately we imagine a writer hunched over a desk, alone.
This assumption interests me, because along with my life as a poet, I’ve been involved for years in another form of obsessive, passionate relation with words and meaning–that is, Torah study.
In Torah study, the accepted basic unit of study is the pair. You rarely sit down to study without your partner, or chavruta, from the Aramaic word for “friend” (if you know Hebrew, you’ll recognize the cognate chaver in there).
“Find yourself a teacher, and get yourself a friend.” A teacher or mentor is someone with whom you resonate deeply, who is further along the path, and can therefore help you access your own potential. A chavruta (also pronounced chavrusa), on the other hand, is a peer: the relationship is built not on directional respect, but on the equality that provides for a good fight. Anna Deveare Smith’s “spiritual twin.”

I imagine Smith would agree that it’s not an identical twin artists should seek out, but a fraternal one–not a yes-man, but a well-matched sparring partner. She uses the example of James Baldwin and Lorraine Hansberry as they “talked, and argued, and tried to figure things out.”

“Scholars sharpen one other,” says the Talmud, referring to Proverbs 27:17 (“Iron sharpens iron, a friend sharpens a friend.” And the sixteenth-century Scottish poet William Drummond agrees: “Iron sharpens iron; scholar, the scholar.”) Chavrutas are sparring partners, using the swords of their minds; sparks fly, edges sharpen. A chavruta challenges your assumptions and pushes you past your comfort zone; of course, a chavruta also comforts and encourages you when that’s what’s called for.
The chavruta relationship can be a passionate one, and some of the great chavruta pairs read like love stories. In one of my favorite Talmud passages, a sage named Rabbi Yochanan meets a thief, circus performer and bandit who comes to be known as Reish Lakish.
This translation is from an Orthodox website, Torah.org:

One day Rabbi Yochanan was bathing in the Jordan. He saw Reish Lakish jumping into the river after him. Rabbi Yochanan said to him, “Your strength should be used for Torah!” Reish Lakish answered back, “Your beauty is meant for women.” Rabbi Yochanan replied, “If you abandon your ways, I will give you my sister, who is even more beautiful than I am, for marriage.” Reish Lakish accepted this upon himself. He then wanted to return to collect his clothing but he could not muster the strength. Rabbi Yochanan taught him Chumash and Mishnah, and Reish Lakish became a great man. (Bava Metzia 84A)

As Torah.org notes, Reish Lakish and Rabbi Yochanan spent the rest of their lives studying Torah together. “Reish Lakish became the brother-in-law and all-time study partner of Rabbi Yochanan. It’s hard to travel a few pages in the Talmud without finding both of their names prominently included in the scholarly discourse.”

It’s important to point out here that the goal is not the relationship itself, but the wisdom that arises from it. It’s not uncommon, therefore, to have multiple chavrutas; you might have one for studying Torah, one for Talmud, and one for Chassidic thought. One of my close writer friends actually started off as my chavruta for a feminist class about key Talmud passages involving women in Jewish law.

How is this relevant for poets? Because chavruta is a model of simultaneously interacting on a profound level with a text and with another human being. It’s a special kind of human interaction, and it occurs across traditions; Rumi and Shams are another famous pair who met over holy texts:

Rumi was reading next to a large stack of books. Shams Tabriz, passing by, asked him, “What are you doing?” Rumi scoffingly replied, “Something you cannot understand.” On hearing this, Shams threw the stack of books into a nearby pool of water. Rumi hastily rescued the books and to his surprise they were all dry. Rumi then asked Shams, “What is this?” To which Shams replied, “Mowlana, this is what you cannot understand.”

But as with all passionate partnerships centered on words, you have to be careful how you brandish your verbal wit. The end of Rabbi Yochanan and Resh Lakish’s story is as extraordinary as the beginning. After years of study partnership, in the midst of a legal disagreement about knives and swords, Rabbi Yochanan makes a snide reference to Resh Lakish’s robber past, an argument ensues, and Resh Lakish dies of grief.
Rabbi Yochanan is beside himself mourning the loss of his chavruta. His colleagues try to comfort him by sending another wise scholar to study with him, but the brilliant new chavruta cites support texts for everything Rabbi Yochanan says, which only makes him more distraught:

“When I stated a law, Reish Lakish used to raise twenty-four objections, to which I gave twenty-four answers, which consequently led to a fuller comprehension of the law; while you say, ‘A [text] has been taught which supports you.’ Do I not know myself that my points are correct?” Thus he went on rending his garments and weeping, “Where are you, Reish Lakish, where are you, Reish Lakish!” and he cried thus until his mind was turned. Thereupon the Rabbis prayed for him, and he died.

I love this story for many reasons, but the reason I’m blogging about it today is that it illustrates the power, the beauty and the danger of the creative partnership that can occur between those who love words, and who wrestle together to more fully comprehend what those words might mean. I offer this as a model for poets, because it’s helped me. Yes, we often must work alone, but we can also find a partner, a friend, a spiritual twin–born of the same mystery, and working towards it.

Photo captions (from top):
1. http://www.chabadonweb.com/files/32/5769/mar-cheshvan/chavruta.bmp
2. Nishmat.net.
3. http://2.bp.blogspot.com/_7tLqMOXSPm8/Rymq90hX2oI/AAAAAAAABso/BIywUlCvJg/
s320/havrusa.jpeg
4. Beyond the Pale.
5. Masa Israel Journey.
This is Alicia’s fourth post for Get Behind the Plough.