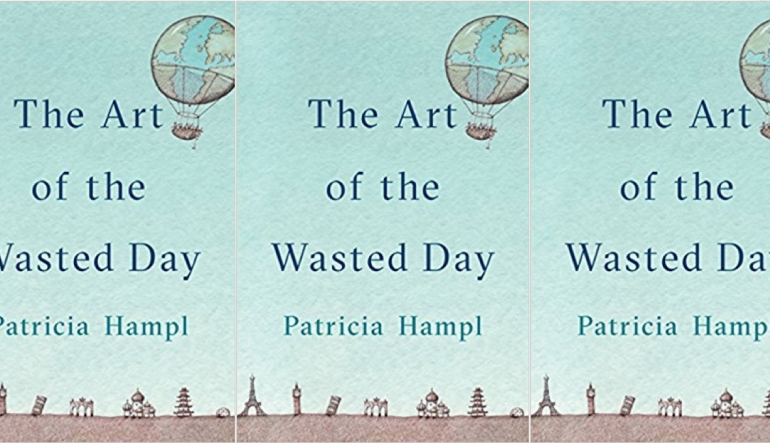 In her new book, The Art of the Wasted Day, Patricia Hampl meanders through disparate terrain: A garden in Llangollen, Wales. A smoky café in Prague. A library in Brno housing notebooks that detail the genetic lives of peapods. A monastery in California. Small towns near the headwaters of the Mississippi River. Disparate yet similar, all places that allow the mind to wander and encourage the leisurely waste of a day. But a day of leisure is not a waste; it is, instead, necessary for reflection and introspection, even the flowering of character.

As she muses, Hampl frequently touches on her husband and on Montaigne. We first meet her husband as Hampl is having a panic attack on an airplane. One seatmate, a nurse, coaches her to breathe deeply while her husband takes her hand into his, a “beautiful hand I’ve always loved.” Several pages later she recounts their first meeting, years earlier, when she is moving into an apartment and he, resident in the building, offers to show her where the garbage bins are located. From this they build a life together, with a shared love of poetry and conversation at the kitchen table, coffee cups between them. We never learn his name though she often returns to him, just as she circles back to Montaigne, the garden in Wales, the peapods in Brno. We learn that his beautiful hand is now dust, in her words, and she slowly pays out the facts surrounding his death, only hinting at some. The details, like his name, are not the point. What is important is her memory of his voice, prodding and encouraging her, as she continues her side of their conversations.

This book has no narrative arc, what Hampl calls “that fiction of fiction.” Instead, she ruminates, putting her subjects down and picking them up again, not quite settling anywhere for long. She lets her mind wander, as one does on a wasted day. Readers familiar with her work will recognize the confident tone and poetry-infused language. They will recognize, too, the nuns at St. Luke’s School, her father the florist, her mother who played the foil to her coming-of-age battles. Here she considers them anew, with deeper understanding and touching vulnerability.

The story of her Uncle Frankie, told in previous books, is a case in point. After her first book came out, a man who had known Frankie from the old Czech neighborhood said he had something to tell her. She met him at a local bar, found him to be something of a gasbag and soon took her leave. Recently, though, someone else approached her and suggested that Frankie’s death, always recounted within the family as a horrendous industrial accident, may not have been an accident at all; maybe he was pushed. With this, Hampl’s thoughts flash back to the old man, now long gone, and to herself as a young woman, impatient and anxious to hurry away. She will never know what he came to tell her, but she does know she can never write about Frankie again.

Montaigne wrote about double consciousness. After a nearly fatal accident on his horse, he knew he had experienced the fall but also observed the fall, in separate yet related strands of consciousness. This duality is necessary to empower personally voiced writing, and Hampl embraces it here, painting herself into stories and, at the same time, seeing herself in them, as she does when recollecting the scene at the bar with Frankie’s friend. This is nothing new. She has been writing at the intersection of memoir and essay for most of her life. Now, displaying a heightened partnership of experience and reflection, she revisits people and events with insight produced by leisure and the ostensibly wasted day.

One revisited episode takes place in Paris when she comes upon a statue of Montaigne near the entrance to the Sorbonne. She told the story when she was guest editor of Ploughshares, in the Fall 2012 issue of the journal. In that version, she encountered the statue while rushing through the rain to find a restaurant. She stopped, rubbed its bronze foot, took some pictures and went on. Now, in the retelling, she steps back, widens the lens and shows her husband there, too, holding the umbrella over her as she listens to his labored breathing, a harbinger of what is to come.

Another memory: Hampl and her husband piloting their vintage Chris Craft cabin cruiser down a stretch of the Mississippi. Remembering the weeks aboard as a time of “domestic romance” and “the adventure of a lifetime,” she speaks directly to her deceased husband. “You were pretty convincing at the wheel, your face still and steady,” she recalls. “And didn’t we love, those weeks of the big trip to Prairie du Chien, just the same as here in our home slip, sitting on the back deck, idling away the night, taking our leisure in the morning? Letting time have its way with us, living Montaigne’s great idea.”

As Hampl wanders through memory, she explores the meaning of writing, and distinguishes between its inherently expressive nature and what she considers the more limited range of expression of art and music. Regardless, no other medium more accurately reflects Montaigne’s duality of consciousness.. And yet, for all its intellectual architecture, this is, at heart, a love letter to her husband and a reminder that wasting time with loved ones is not wasting time at all.

Tags:Patricia Hampl, The Art of the Wasted Day, Viking