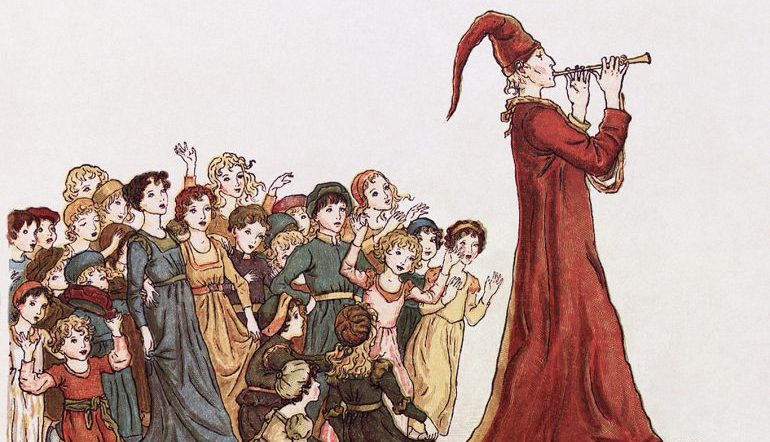 Traditional fairytales, despite their reputation as stories for young children, are replete with horror and gore. The fairytale genre is one in which evil queens dance themselves to death in shoes of red hot iron (Snow White), ambitious stepsisters sever pieces from their own feet in pursuit of a prince (Cinderella), and sleeping princesses wake to find they have conceived and delivered children through repeated rape (Sleeping Beauty). Under the comforting distance of “once upon a time,” fairytales traffic in the morbid and the frightening as they moralize on the dangers of vanity, deceit, and existing as a woman, child, or vulnerable individual in a world full of hazards. In storifying terrible events—the mass disappearance/death of children (The Pied Piper of Hamelin), child abandonment and attempted infanticide (Hansel and Gretel)—fairytales make horrors, both real and imagined, palatable for mass audiences. Martin McDonagh mobilizes this aspect of the fairytale mode in his award-winning 2003 play The Pillowman, which relates a number of gruesome tales through the stories of the writer-protagonist Katurian.

The Pillowman opens in a police interrogation room in some unnamed totalitarian state, where Katurian is undergoing questioning by two detectives, Tupolski and Ariel. Katurian isn’t told why he has been brought in or what is expected of him. The detectives let him talk through his nervousness, occasionally repeating his words back to him, twisting his meanings, and threatening/enacting violence. It would be Kafkaesque were it not for the occasional one-liners and the comedic underpinnings of the Ariel/Tuposlki double act:

Tupolski: Make him swallow them

…Ariel tries to force the toes into Katurian’s mouth.

Tupolski: Don’t make him swallow them, Ariel. What are you doing?

Ariel: You said make him swallow them.

Tupolski: Only to scare him! They’re evidence! Have some sense!

Eventually, they get to the cause of Katurian’s detention: a series of child-murders bearing uncanny resemblance to his stories. These stories are written in the mode of traditional fairytales with many relating to the disturbing treatment of children. As Tupolski insinuates, “Y’know, your theme, ‘Some poor little kid gets fucked up.’ Your theme.” Unfortunately for Katurian, these stories—with the exception of a single tale—remain unpublished, directing all suspicion in his direction.

The published story, “The Tale of the Town on the River” reimagines the origins of the one traditional fairytale explicitly referenced in the play, “The Pied Piper of Hamelin.” In the original fairytale, a town plagued by rats agrees to pay a piper to get rid of the creatures. When the town refuses to pay him for his service, the piper returns and lures away all the children, except a young crippled boy who couldn’t keep up with the others. The children are never seen again. Katurian’s tale recounts a kindness shown by a small boy to a strange traveler passing through a nondescript town of yore, which is revealed in the final lines to be Hamelin. The traveler repays the boy’s kindness by severing all of the toes from one of his feet. As Katurian explains, “Do you get it? The little boy is the little crippled boy who can’t keep up when the Pied Piper comes back to take all the children away. That’s how he was crippled.” The twisted moral from this tale, which is also central to the original fairytale referenced in the play’s title, is that sometimes a horror can be a kindness. This moral is not so unambiguously echoed in the play’s narrative outside of the fairytale mode.

The toes Katurian was almost forced to eat by the overzealous Ariel belonged to a young Jewish boy who died from blood loss after losing his appendages, a method of murder directly evoking Katurian’s Pied Piper narrative. For this boy and for the young girl who died after being forced to eat apples containing razor blades, like in Katurian’s story “The Little Apple Men,” the “reality” of the horrors enacted on them in their final moments is sickening in a way the fates of their fairytale counterparts—while disturbing—are not. The line between fairytale and other narrative modes is one between distance (emotional and temporal) and immediacy. The Pillowman consistently plays across this line, retreating from and then suddenly foregrounding moments of visceral horror.

The distancing inherent to fairytales is in part a feature of their often moral or instructive dimension, but it also relates to the fact that some are thought to communicate, in altered and storified form, true events and histories. “Hansel and Gretel”, for example, is thought to reflect the real instances of child abandonment that marked periods of desperation and famine in the medieval period, and “The Pied Piper of Hamelin” is thought to have emerged from a tragic event that occurred in the town at some point in the thirteenth century. McDonagh’s play, while focused primarily on fairytales subsequently enacted in real life, also presents an example of a real history translated into the fairytale mode: the story of Katurian and his brain-damaged brother Michal, also a suspect in the murders and being held in the adjoining room.

The brothers’ past is as brutal and tragic as any fairytale. In “The Writer and the Writer’s Brother,” Katurian retells their origins in a manner we learn is not quite true to reality—the reality being far worse. In this instance, the fairytale mode allows for past trauma to be processed at a safe remove. While potentially helpful and productive in this framing, this sense of distance from reality is also, perhaps, what facilitates the atrocities that are at the core of the play’s narrative. For, if everything begins with “once upon a time,” the consequences of any action—including the deaths of children—become remote.

The use of fairytales in The Pillowman allows the narrative to progress across two separate but increasingly intermingling registers. The demarcation between Katurian’s present moment interactions with Tupolski and Ariel in the interrogation room and then with his brother, Michal, next door becomes infused with story-like qualities as the play progresses. In the end, Katurian is left narrating the final moments as if relaying one of his many tales. This narrative disruption worries at the boundaries between fairytale and reality, asking dark questions about the nature and purpose of storytelling. Ultimately, the distancing quality of the fairytale mode provides a chilling rationalization for the murderer’s actions and allows for the more disturbing elements of McDonagh’s work to co-exist with its overarching comedic/satirical tone.

Tags:Martin McDonagh, The Pied Piper of Hamelin, The Pillowman