Home
»
Critical Essays
»
The Fancy and Imagination of Herman Melville 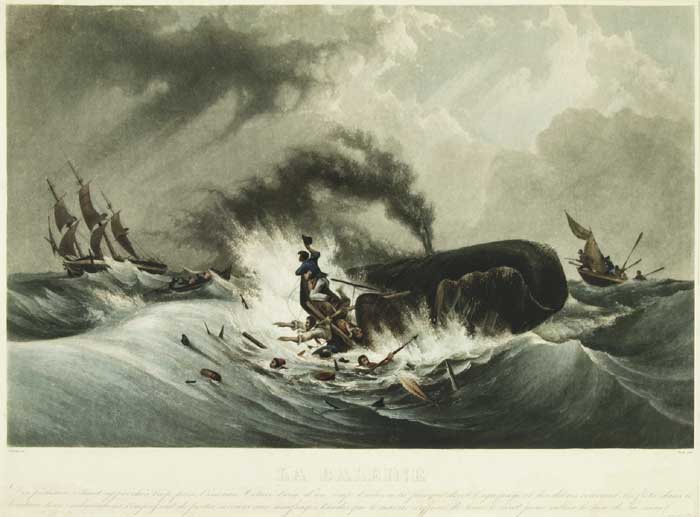 In his 1817 text Biographia Literaria, Samuel Coleridge describes the act of creative association as an interplay between sensual experience and language. He writes, “Seeing a mackerel, it may happen, that I immediately think of gooseberries, because I at the same time ate mackerel with gooseberries as the sauce. The first syllable of the latter word, being that which had coexisted with the image of the bird so called, I may then think of a goose. In the next moment the image of a swan may arise before me, though I had never seen the two birds together.” Memory and association require a passive receptivity, what Coleridge calls fancy, or “that which supplies to all other faculties their objects, to all thought the elements of its materials.” Imagination, on the other hand, shapes fancy’s acquired materials into a “unified whole.” The process, then, alternates between action and inaction, not unlike the hours upon hours sailors spend at sea listless before the next round of backbreaking labor.

But the sailors’ boredom, Coleridge might argue, isn’t futile, at least not for a sailor like Herman Melville, whose imagination sculpted out of sensation and experience, daydreaming and dream-catching, a whale like Moby Dick. On the one hand, Moby Dick is certainly a “unified whole,” but he is also made of scraps, collaged together beneath the vaulted ceiling of a barn in Western Massachusetts, purchased after his return from sea, among the horses and cows; there, as Melville writes in an 1850 letter to Evert Duyckinck, “I have a sort of sea-feeling . . . now that the ground is all covered with snow . . . I almost fancy there is too much sail on the house, & I had better go on the roof & rig in the chimney” (emphasis mine).

As an avid reader of Coleridge’s work, Melville was certainly acquainted with the terms imagination and fancy. For Melville, fancy populates the Pequod’s deck with sailors who, in their frolicking, remind him of young horses, and the frolicking of young horses might lead him to the “gambols” of whales. These associations aren’t seamless, and I don’t believe they were meant to be. In so many ways, such pairings attempt to show us the incongruities and, to a large extent, false gilding we add to life in order to make it more palatable, less terrifying.

A young horse, in particular, carries inside it a sort of dreadful potential, an opportunity for Melville’s imagination to give form to fear. In his letter to Duyckinck, for example, he describes the delightful vision of three horses galloping after a sleigh, only to end in “a bad accident in the loss of a fine young colt.” The horse in question, called “Black Quake”—whose leg was broken into “clean into two pieces [sic]”—becomes an opportunity for Melville to imagine a future the colt will no longer have, “considering the bounding spirit and full-blooded life in that colt—how it might for many a summer have sported in pastures of red clover & gone cantering merrily along.” While Melville then calls on “all good Christians” to pray for Black Quake, his solicitation isn’t without irony; who has the power to decide the colt’s future? Is it God or the train that collided with him? Was the colt’s injury fated or was it random, and if it was random, which answer is more terrifying? Ahab repeatedly grapples with questions of fate and purpose in Moby-Dick; or, The Whale, wondering aloud, for example, in Chapter 132, “The Symphony,” “Is Ahab, Ahab? Is it I, God, or who, that lifts this arm?” Ahab wants to know what, if any, agency he has over his own actions. Is he enacting God’s will or his own, and if the answer is neither, what’s the alternative? For Melville, the answer might lay in the whaleboat itself. It represents a powerhouse industry, a miniature city, and a systematic means of production—from living animal to barrel of oil. It’s possible that Black Quake’s injury may have inspired Melville to consider industrialized capitalism as a cruising whaleship or—in the injured colt’s case—a speeding train: who’s at the wheel? Who shovels the coal? Who dies on the tracks?

In the furnace of Melville’s imagination, the colt comes to symbolize the disordering rifts and frayed edges of the “mingled, mingling threads of life” that transport us in and out of Moby-Dick’s primary action, which is, quite simply, Ahab’s hunt for the white sperm whale who injured him years before. Interwoven are detailed descriptions of whaling’s processes, a naturalist’s guide to various whale species, and musings that metaphorically whisk us out of “sunniest day[s],” and take us from, for example, New England to Oregon in the forty-second chapter, “The Whiteness of the Whale”:

. . . [a] strong young colt foaled in some peaceful valley of Vermont, far removed from all beasts of prey—why is it that on the sunniest day, if you but shake a fresh buffalo robe behind him, so that he cannot even see it, but only smells its wild muskiness—why will he start, snort, and with bursting eyes paw the ground in phrensies of affright?

Melville evokes the colt here in an attempt to describe narrator Ishmael’s reaction to nature’s sublimity: “the muffled rollings of a milky sea; the bleak rustlings of the festooned frosts of mountains; the desolate shiftings of the windrowed snows of prairies.” The “Whiteness of the Whale” is another pause in the novel’s action; in this case, Ishmael tries to unpack the meaning behind Moby Dick’s whiteness. In an attempt to understand why the whale’s color (or lack of color) is particularly horrifying, he evokes various mythologies,  cultural associations, and representations of whiteness, finally ending with a description of his own, bodily reaction—an unexplainable, ineffable terror—that perhaps points to some innate knowledge in himself and in the colt. That is, some boundaries aren’t meant to be breached; the colt should no more put its body near a herd of stampeding bison than a man should put his in uninscribed wilderness.

Melville’s colt in “The Whiteness of the Whale,” however, does manage to breach the boundaries of place and time. It is born in New England only to be transported by instinct to the American West; Ishmael may look at the “desolate shiftings of . . . snows” but is transported by association to the moment of his death, and the emptiness he sees, voided of color and meaning, is the “colorless, all-color of atheism from which we shrink.” In other words, waiting for Ishmael after death is only God’s absence or—worse yet—the knowledge that no god ever has, nor ever will, exist.

If God doesn’t determine outcomes, Melville again turns to the image of a horse as a means of working out alternative philosophies. In the ninety-third chapter, “The Castaway,” for example, Pip, a young cabin boy, is contrasted against another sailor, Dough-Boy, “like a black pony and a white one, of equal developments, though of dissimilar color, driven in one eccentric span.” What if, Melville supposes, two ponies—one black, one white—are raised together in the “one eccentric span” of the Pequod. While Dough-Boy is “hapless,” “dull,” and “torpid,” Pip’s natural “brightness” is “most sadly blurred” but “in the end…destined luridly illumed by strange wild fires.” If Dough-Boy isn’t capable of transforming his circumstances into an active imaginary life, then Pip is. Yes, both boys are “of equal development” and “raised together;” however, Pip’s particular experience ultimately renders him both extraordinary and of a little economic use. In “The Castaway,” Pip is made to fill in as an oarsman in a whaleboat, and leaps from it out of fear, into the ocean where “the sea jeeringly [keeps] his finite body up, but [drowns] his infinite soul.” Melville fears the repercussions of slavery and its propensity for destruction and demonstrates this by transforming Pip into a tortured mystic, reconfigured by his suffering into the kind of “wise fool” who has gone to the depths of humanity’s madness and somehow lived to tell the tale.

The horse, for Melville, can be both victim and accomplice and can be transformed by economic pressures into entertainment, transportation, as well as vehicle for conquest, depending on context and association. Still, the image of a young pony or colt, on its surface, is gilded by humanity’s desire to see its gambols, however ungainly, as a sign of joy—the playful horse as analogous to a man’s youthful pleasure in a happy world when “fact and fancy, half-way meeting, interpenetrate, and form one seamless whole.” But Melville—via Ahab—is here to disabuse us of this notion by telling us, “men yet may roll, like young horses in new morning clover . . . [but] we do not advance through fixed gradations, and at the last one pause . . . but once gone through, we trace the round again.” In other words, we’re constantly encountering ourselves as we were and as we will be; no narrative is perfectly linear, no voyage an end in and of itself. For Melville, the horse is both the gilded sunlight of youth and the fear of youth’s end. A horse’s leg is miraculously both strong and fragile. We are miraculously both young and old, whale and whaler, Pip and Ahab.

Arguably, Melville understood his associations in Moby-Dick were strange, even disorienting. As he tells Duyckinck later in the same letter that describes Black Quake’s injury, “the poetry runs as hard as sap from a frozen maple tree;—& to cook the thing up, one must needs throw in a little fancy [emphasis mine], which from the nature of the thing, must be ungainly as the gambols of the whales themselves. Yet I mean to give the truth of the thing, spite of this.”