Home
»
Critical Essays
»
The Musicality of Memory in The Hakawati 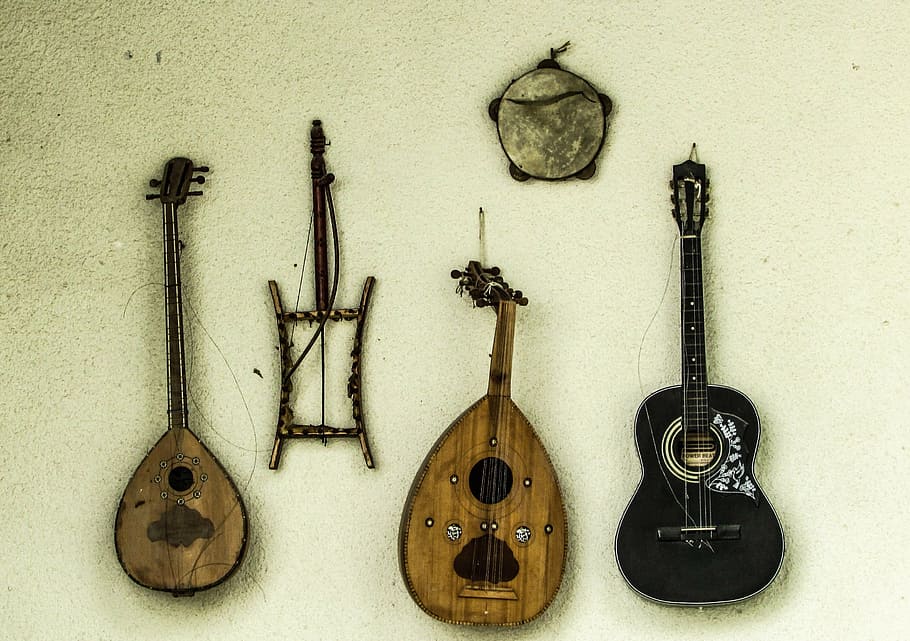 I first read The Hakawati, by Rabih Alamaddine, over ten years ago, when I was still in high school. The Hakawati, which literally translates to “The Storyteller,” is about oral storytelling and different generations of a close-knit Beiruti family. It reminded me of my experiences growing up in a large joint family and quickly became a work I could reread endlessly. Clocking in at 600 pages, the tome bursts with life and possesses a folktale-like, mythic quality. It explores the macroscopic themes of migration and Lebanese history even as it grapples with the meaning of popular entertainment. Accounts of births, marriages, and the family’s escape during the civil war jostle with stories of Abrahamic prophets and jinn. The text is closely attentive to clashing personalities, family memory, and the intimate complexities of home. The resulting effect is one of magnanimity, humor, and astonishment.

The Hakawati opens with Osama Al-Kharrat’s return to his dying father’s bedside in Beirut. As he and his relatives keep vigil in the hospital, he is reminded of the Al-Kharrat family’s past and the religious tales and fables of his youth. Osama’s grandfather, Ismail, was a professional hakawati, and was considered to be a belligerent, difficult man. His relationship with Osama, however, was tender and gentle. Osama listened to his fables and family recollections, which Ismail believed should be bewitching. Stories with “obvious moral lessons,” he thought, “were like eels in a wooden crate,” slithering over each other but devoid of broader life. The Hakawati bewitches its readers by interspersing descriptions of music and the oud (a classical Arab instrument) among narrative episodes. This structure mimics the real-life experience of oral storytelling, in which music complements the act of recounting to heighten drama and tension; the profusion of music interrogates the unknowable in daily life. Music serves as a unifying thread throughout the text’s elliptical, circuitous form.

The narrative abounds with music. Osama, like his great-grandmother Mona, plays the oud. Mona’s oud appears many times—Osama’s niece, Salwa, brings it to the hospital at the end. Ismail also plays the oud, albeit off-key. The instrument is a site of intergenerational dialogue, allowing for connections between disparate events. These parallels infuse the narrative with unspoken urgency. Other family members are equally influenced by music and sound. Osama’s Uncle Jihad is a fan of Umm Khalthoum, a famous Arab singer. Ismail’s birth is accompanied by incessant loud wailing. These auditory elements bridge the sublime and quotidian—music serves to transcend language and explore the deeply profound and unnamable in the triumphs and tensions of daily family life.

The Hakawati first mentions the oud when Osama and Ismail are at Ismail’s house in the Druze Mountains, where Ismail asks Osama, who has been taking oud lessons, to play a song. Osama refuses, saying that his grandfather’s oud has the wrong strings. He tries to play a maqâm (note), but the tune does not sound right. In an outburst typical of Ismail’s cankerous disposition, he comments that Osama plays like a “donkey angel.” He then explains that the word “bakshi” means storyteller, singer, and player of oud in Central Asia. The storytelling musicians of Khorasan in Iran thought that “bakshi” came from “bakhshande,” which meant “bestower of gifts” because of the musical gift God had bestowed upon them, and which they conferred upon their listeners in return. Ismail’s postulation highlights the interwoven relationship between storytelling and music, worthy of exaltation and bequeathed by greater forces, and places the oud player as being part of a rich musical tradition.

Immediately after this explanation, however, Osama notes that Ismail has a “lousy voice” and sang a “song about a boy who had more luck than brains.” The song is resolutely human, familiar, familial. The fact that Ismail’s “off-key” voice follows his belief in “bakhshande” bridges a rich, ancient tradition and an everyday memory. It embalms the scene with wistfulness and history. The narrative literalizes the collapse of time and further merges with history by cutting to a scene preceding Ismail’s birth during his mother’s pregnancy. Much like the rhythmic, circular nature of music, the text is non-linear and meandering.

Osama narrates how his great-grandmother, Mona, was an entertainer and a master oud player. She knew more than a hundred songs, including those from her native Albania. Her husband fell in love with her when he heard her play the oud, and on her marriage, she gave up performing in public. Her oud, the gift of a sultan, in that moment becomes a mythic family heirloom. Osama’s niece, Salwa brings it to the hospital where his father is admitted. Osama marvels at its workmanship—the invaluable cedar wood and the mother-of-pearl lining the neck. Both Osama and his sister are struck by how old it is and pinpoint that it has not been used in a hundred and fourteen years. Osama tries to play it, but it is out of tune and the sound is atrocious. Osama laments that it cannot be played. His fingers ache, and he wonders if his hands would remember his love for the oud and his lessons, which he had consciously erased. With his father seriously ill in the hospital, the decaying oud is imbued with the stress and fear of impending loss. Osama and his sister weep at the gorgeous oud’s disappointing sound, a loss more severe in the face of their father’s illness. The inflection is of history condensed, five generations clustered around the same instrument. The oud buckles under the weight of Mona and Osama’s unrealized explosive potential and the irreversibility of decline and death.

Osama’s oud lessons feature heavily in the text. He learns how to play it during a period of seven years, which stretches from the Six-Day War to the Yom Kippur War. He first meets esteemed musician and oud teacher Istez Camil at a friend’s apartment, where they listen to radio broadcasts of the war. He is immediately struck by the delicacy of his teacher’s old oud. In contrast with the tensions of war, Osama’s enchantment with the oud and his lessons speak of levity, sensitivity, and transfixing beauty. The tradition of classical Arabic music is interwoven with violent, bloody episodes in Lebanese history. The story of the Al-Kharrat family excavates and reclaims both the richness and tragedy of their homeland.

As taught by Istez Camil, the oud exemplifies reclamation and the blending of beauty and conflict. The oud is unique in that it becomes part of the body. It engulfs the listener, and the listener engulfs it. He notes that the word “maqâm” means “place” or “situation,” and also translates to “shrine.” Osama himself notes that the sound was a “cascade of grace,” engrossing both the listener and the musician, reminding him of teardrops descending down a cheek. His teacher is touched by this description, telling him that it reminds him of Shah-Kuli, considered to be the greatest oud player who ever lived. When the Turks conquered Baghdad in 1638, the oud player, like so many Persians, was scheduled to be executed. He was brought before the sultan, where he played a maqâm and sang so gently that he moved his audience to tears. The weeping sultan halted the massacre. Against the backdrop of the wars of Osama’s youth, the oud illustrates the tragedy of strife by appealing to its listeners’ core, beyond external trappings, and offers hope. It guides the listener through the many facets of the elemental and the many timbres of loss.

Although Osama’s connection to the oud is profound, it is not infallible. His sister encourages him to play Beatles songs on the guitar to perform in front of her friends. He obliges, and his performance is a big hit. At one point, a schoolmate tells him that the “oud was for old-fashioned Arabs.” Not wanting to seem old-fashioned, he gives up his lessons for the more popular guitar. This episode highlights the struggle between tradition and modernity, and between acceptance and solitude. In a poignant incident towards the end, a college-aged Osama and his friends smoke weed and play the guitar. In a daze, Osama plays oud maqâms on the guitar, but the tune doesn’t sound right. He tears apart his guitar fret to free the strings to better reproduce the sound, depicting how the oud still had a pull over him. Much like Mona’s decaying oud, the butchered guitar provokes a deep-rooted feeling of loss. Loss of control over the uncontainable sound and his oud lessons, but also loss of family and home as he once knew. The music commemorates and crystalizes memory while simultaneously acting as an elegy. It imparts generosity to the snippets of Osama and his family’s foibles. The instruments exemplify the core tensions of the book—of family, home, time, and the incomprehensible present.

The inexplicable is also present during Ismail’s birth. His mother’s first scream during labor is heard throughout the town just as the prophet Abraham walks into fire in a recollection of the famous parable. Her wails during labor are so loud that neighbors gather outside their house. On his birth, the hakawati also mimics the cries. He shrieks incessantly to the point where no one in the household can comfort him. His mother’s dying words to him beseeched him to “shut up just once.” The inconsolable wails foreshadow how he would grow up to be misunderstood. Osama recounts how none of his children listened to his stories. Here, sound is dramatized to portray ingrained loneliness, futility, and the cruelty of otherwise well-meaning and loving family members. The piercing sound epitomizes the messiness of blood.

The Hakawati unleashes music and sound to interrogate the deeply profound and sublime in the seemingly mundane and ordinary. Music adds elegiac tenderness and hope to the narrative. It instills it with bewitching qualities and does not moralize or judge. The oud embodies intergenerational exchange emblematic of winding family ruminations. It becomes a source for the Al-Kharrat clan, with their Armenian, Albanian, and Druze ancestry, to reclaim both the richness and tragedy of modern Lebanese history. The instrument exposes the loneliness and the complexity of family memory. The text uses music and sound to delve deeper into everyday life and bridge it with realms that lie beyond language. In doing so, it suffuses accessible popular entertainment with compassion and generosity.