Home
»
Critical Essays
»
The Poetics of Directness in D. F. Brown’s Ghost of a Person Passing in Front of the Flag 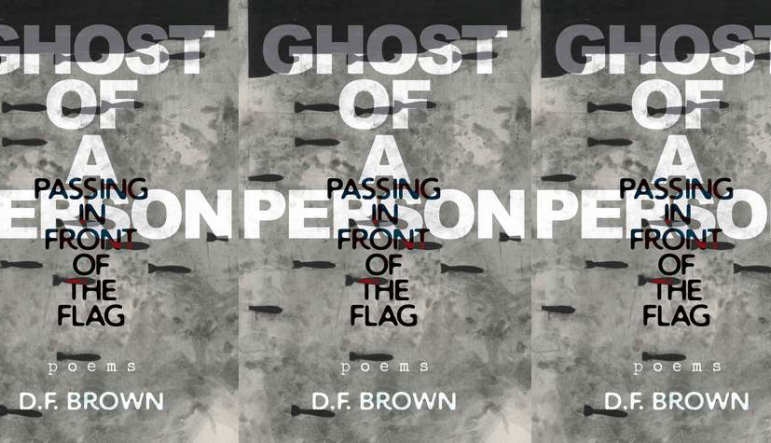 In D. F. Brown’s newest collection of poems, Ghost of a Person Passing in Front of the Flag (Bloomsday), I keep going back to the opening lines of “Vietnamization”: “You’re in this someplace else you dream,” he writes. “Night a thing, tough shit all over, darkness / You’re talking to a guy who picks up the pieces.” In this poem, as with the others, I’m struck by the language of the dreamscape he creates—the haunting cadences, the bending and shifting of nouns, the Vietnam War–era lexicon that is a soldier’s lexicon, a lexicon that is the texture of terror with a dynamic melancholy that drifts eerily between anger, frustration, and a kind of gallows humor, sometimes all within the same poem.

This gives the collection the feeling of being at once retrospective and undeniably immediate, prescient even, as it outlines—if in the soldier’s mind—the rift between a soldier’s lexicon and, say, a politician’s or a journalist’s. The veneer that is language is a major recurring trope in this collection. What is real and what is imagined through the filter of language? How might that affect the way we process an event? And how does language blur the line?

Ghost of a Person Passing in Front of the Flag feels like it’s written from the blurring of language but also the blurring of geographies, moods, anxieties, and associations. Its images often conflate the ordinary with the extraordinary, the tender with the brutal. In the poem “Liquids,” Brown writes in the last stanza: “They carried love in their hearts / like water to a fire / in a sleeping child’s room.” There’s a constant blending of the home front with the front line—the death of a blonde kid from Kansas in the jungle bush, a cooler full of Coke and cookies under the triple canopy of An Khe ‘69, the absurdity of “a bunch of fully-armed teenagers / the dream of dry socks / I mean really.”

Similarly, the poems blend truth and memory in the public imagination—the disinformation and obfuscation vis-à-vis political rhetoric (and its lexicon) fed to the American public over five presidential administrations, from Eisenhower to Ford. It’s this blending within Ghost of a Person Passing in Front of the Flag that makes this a particularly timely read, with much of America examining the way language (as it manifests in public discourse) is being used to frame and alter the American experience as we creep increasingly toward fascism, as we commit violence against those seeking asylum.

Many images from Brown’s poetry remind us of the kind of evil ordinary Americans are capable of and the way institutions perpetuate that evil by virtue of language (which also serves as shield and salve for the American conscience at best and as a form of encouragement at worst). The language of military policy, bureaucracy, politics, and journalism made it possible for the onus of the Vietnam War to be placed on the soldiers—labelled losers, baby-killers, rejects by the public—but never on the politicians or white collars in government who pulled the levers of power, who escalated conflict in Vietnam in the first place. The lexicon of the Cold War—containment, conflict of systems, free peoples, the invisible enemy—framed both the stakes and the appetite for conflict. And D. F. Brown cuts through all of it by laying plain the truth via an efficiency of language that uses the blurring of these many contact zones to create brief moments of clarity.

In this poem and others, which are accessible and honest and simple, I’m reminded of the radical, poetic power of directness in the face of spin. Just as Brown uses simplicity to reframe his experience and takeaways of the Vietnam War, we might also aspire to liberate ourselves from the frames that have been presented to us in this current era by recognizing them as frames to begin with, and by aligning truth with that directness, allowing that simplicity to cut through the bullshit. That directness also reminds me of something else I think we’ve forgotten: we already have the language to process everything already; buy into your own language, buy into your own subjectivity and the agency it might come with.

Already, we’ve seen how powerful the aligning of poetic directness and truth can be. In the past two weeks, America acknowledged that immigrant children being separated from their parents were being housed not in “walls made out of chain-link fences” but in cages; that those seeking asylum are not being “detained” but being interned; that those seeking asylum by presenting themselves to border officers instead of crossing as undocumented migrants were legally applying for refugee status. Though we’re far from finished with the fight for the dignity of all people who enter this country, we’ve already seen how directness in language has pushed the needle in favor of these realizations. Such clarity has facilitated the opening up of the conversation on human rights to the larger public so that now things like for-profit child prisons are suddenly on many people’s radar.

In D. F. Brown’s final poem in the collection, Part Two: “The Other Half of Everything,” Brown writes;

I, for one, am dropping constraints. I’ll hold it
to language. More mischief, less mystery.

You don’t have to take it on the chin.
Leave the darkness for Springsteen
I know the tune.
Any time now is fifty years since.

Brown’s words are a reminder that directness is uncomfortable but necessary for progress; it is necessary for coming to terms with the lies and half-truths we sometimes tell ourselves. Before clarity comes doubt. And before doubt comes that state within the blur, that place countering the absolutes, the black and white, the us-against-them, the America-versus-the-world mentality that’s deluded us through language that speaks to those ends.

Tags:D. F. Brown, family separation at the border, Ghost of a Person Passing in Front of the Flag, Liquids, The Other Half of Everything, Vietnam War, Vietnamization