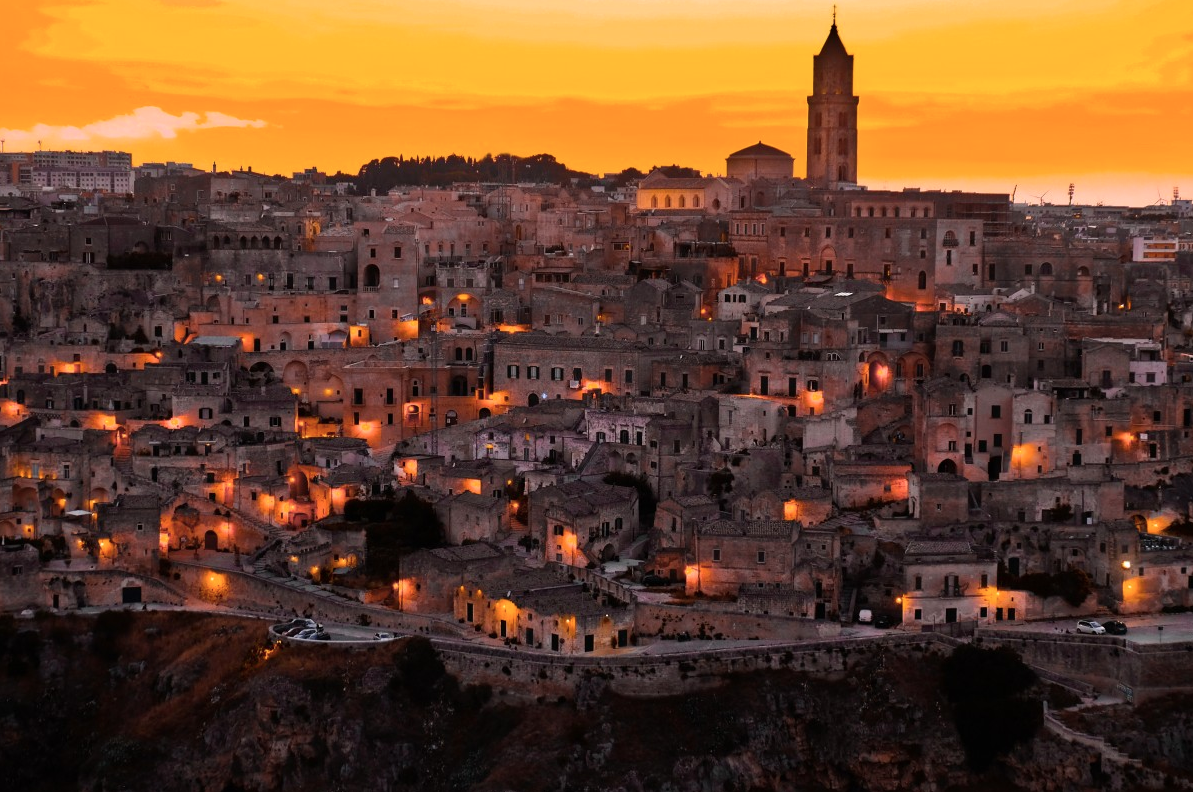 In his memoir, Christ Stopped at Eboli, first published in 1945, Carlo Levi, the painter, anti-fascist, writer, and doctor, conjures a world of profound isolation. Exiled under Mussolini in 1935, his new life in Puglia oscillates between the futuristic and the neolithic, the hostility of the arid landscape reflecting that of a cratered moon and the locals in the villages scattered around southern Italy orienting their lives around Pagan rituals. Christ Stopped at Eboli confronts the realities of living at the fringes of society, where the signifiers of “civilization,” whether a customary dedication to Christ or a general awareness of politics, fail to draw breath into this region beyond the remote town of Eboli.

While the comfort of his previous life appears at an endless distance, it remains geographically quite nearby—a poignant contradiction that is never felt more acutely than in his description of Matera. Referred to by Levi as “a schoolboy’s idea of Dante’s Inferno,” Matera is constituted by a haphazard matrix of winding passages and troglodyte settlements. It is one of the oldest cities in Europe and at the beginning of the twentieth century had been left to fester in its antiquity and developing poverty. Levi’s book addresses the immense suffering of its people, who were living in caves among dogs, sheep, and goats, without running water and electricity—a reality that, of course, gave rise to epidemics, particularly of malaria and trachoma, which Levi’s sister saw manifested in the children’s “dilated stomachs,” yellowing faces, and “red and swollen” eyelids. In finding an explanation for these conditions, she grappled with the ineffable, finally reaching for a natural conclusion—it was as if the city had been “stricken by the plague.”

This year, Matera was named a 2019 European Capital of Culture, an accolade to be added to its UNESCO World Heritage Site status, which it received in 1993. Upon visiting this summer, Levi’s Matera at first seemed like a remnant of a bygone era; the honeycomb dwellings have been stuffed with boutique hotels, galleries, and bars. When weaving through the city, however, I began to notice the abandoned homes siphoned from sight behind metal grids. Trash littering their unkept gardens, large wooden doors boarded up, and windows cut from the rubble, forming black pits in a white cliff-edge, they seemed to suggest what had once been. While this was a sight characterized by absence, visitors were also given a keyhole view into the town’s moribund history through the preserved caves Casa Noha and Casa Grotta del Casalnuovo. These landmarks undercut the romanticism of the surrounding Airbnbs by showing their quaint and shabby aesthetic to be rooted in a history of great poverty.

To understand Matera’s transformation, we must look back to Levi’s work. The significance of Christ Stopped at Eboli is not just in its writing but also in its status as a historical artifact, around which great political changes were initiated. Following its publication in 1945, it garnered the attention of prime minister Alcide De Gasperi, who vowed to clear up “the shame of Italy.” What he ended up offering was an ill-conceived government program to relocate Matera’s people and renovate the grotto. Beginning in 1954, the city’s population of roughly 16,000 was slowly moved into a housing project at the outskirts of town. Once settled, however, it did not take long for the flaws in the plan to reveal themselves. To begin with, the transition disrupted the communities of the Sassi, leaving people isolated in an alien environment. These social issues were compounded by economic struggles, as the city’s residents were told to make a living off agriculture but were provided with limited, and somewhat unworkable, plots. By the 1960s, all the locals had moved on to seek employment opportunities elsewhere, leaving the city an empty shell. This emptiness, however, did not last long, as Matera quickly started to fill with artisans, property developers, and small-business owners who sowed the seeds for the tourist industry that can be seen today.

In contextualizing these events, the issue is both ethical and metaphysical. Akin to the ship of Theseus, the city represents a philosophical conundrum: If an object has all its components replaced, does it remain fundamentally the same object? Likewise, if all the citizens of a town are displaced, is it the same city? If we are to take these two histories as distinct, then the “new” Matera can be understood as a straightforwardly wealthy town with a flourishing cultural scene. Recent coverage, however, has painted its development as a rags-to-riches case—the Smithsonian deemed it a “dramatic story of rebirth” and the Guardian lauded its transition from “city of poverty and squalor” to “hip hub for cave-dwellers.” If Matera is understood to hold a single history, then its renaissance looks more like a baptism by fire, where we must reconcile a tense irony—how the occupants of a place, now celebrated for its culture, were irreparably damaged by the efforts of a well-intentioned author.

The impact of Christ Stopped at Eboli can be taken as a case study regarding what political writing can and cannot do. It often seems difficult to see how literature can tangibly influence political climates. Books are perhaps better suited to initiating change than directing the course of it. Sometimes this can be for the worst, as seen in the case of Christ Stopped at Eboli, which catalyzed an exodus fundamentally at odds with his polemics. At other times, it can be for the better—something witnessed in John Steinbeck’s relationship with the Roosevelts, where Grapes of Wrath resulted in the reformation of labor laws in migrant camps during the Depression. Occasionally, the results can be ambiguous or unexpected. This was famously the case with Upton Sinclair’s The Jungle, where his words had a more profound impact on food hygiene regulations than on worker exploitation in Chicago’s meatpacking district.

In explaining these discrepancies, Juliana Spahr offers a theory in Du Bois’s Telegram: Literary Resistance and State Containment (2018). Focusing particularly on US literature, she discusses the way in which political texts, ranging from twentieth-century avant-garde modernism to the social-movement writing of the 1960s, have historically been diluted, squashed, or undermined. She argues that the reason for this is government intervention—particularly the efforts of the FBI to shut down political works, and the work of the CIA in manipulating their effects. In some moments, she gestures toward the issue being monetary, where state funding and private foundations like those maintained by the Rockefellers have been used to support multiculturalism in literature while also suppressing anti-colonial narratives. At other points, these issues seem to be more a problem of the medium, where the individual agency of an author is easily stifled by the structures of burgeoning nationalism.

Though arising in a very different context, Levi’s work similarly struggled to speak up over the broader political narratives of the time. While it would be a mistake to attribute a specific motive to his writing, the case of Matera poses an interesting example of what a political text can realistically achieve. In evaluating the book’s successes and failures, we perhaps should look to another question: Should the force of novel be weighed against what can be seen or what can be felt? What I saw in Matera was a tragic history and a complex future, but Levi’s endeavours should not be reduced to a sum of uncontrollable facts. If, however, we are to judge him by the force of his written words, then the political might of Christ Stopped at Eboli will remain an open question.