Home
»
Book Reviews
»
Fiction
»
The Summer of Salinger, A Review 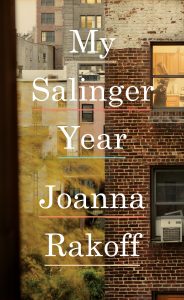 As a boy in Manhattan, Thomas Beller frequented the Museum of Natural History, struggled with his Jewish identity and didn’t apply himself in school. Now he’s our, “ideal guide to J.D. Salinger’s world.” As a young woman from Brooklyn, poet Johanna Rakoff stumbles into this world, testifying, “We all have to start somewhere.”  Last summer both authors released books with Salinger’s name in the title, but that’s about all they have in common.

With J.D. Salinger:The Escape Artist (New Harvest, June 2014), Beller embarks on a “quest biography…as much about the biographer as the subject.” It’s a questionable premise. Does Beller think he’s that interesting? There’s no denying Salinger—from Manhattan, to Normandy, and New Hampshire—lived an intensely singular life. How can Beller expect to measure up?

We never get answers to those questions (or any others), because The Escape Artist is more literary walkabout than author analysis. Our guide wanders off near Riverside Drive.

Beller acknowledges an, “aura of trespass,” yet he slogs on, describing Salinger as he’s been described to oblivion: “consummate outsider,” “genius recluse,” and—of particular significance to Beller—“half-Jewish.”

His mission is, “an Easter egg hunt,” or, more appropriately for the half of Salinger with Semitic blood, “a search for the Afikoman at the Passover Seder.” But it’s nothing doing. In the end, our meta-biographer comes up short on the matzo. Salinger wasn’t hidden from the world nor did he escape from it. Although he’s one of Salinger’s’ fanatical readers, Beller remains unsatisfied with what he knows. The problem is, our quester asks enough mind-numbingly rhetorical questions (e.g., “was his seclusion…evidence he had gone crazy? Did his choices about how to live…amount to a kind of judgment on everyone else? “) to make you down a bottle of Manischewitz.

Beller’s numerous attempts to draw parallels between himself and his subject come across as forced, desperate, and just plain weird. We’re left with something worse than hearsay—Beller’s rendered Ian Hamilton’s doomed 1986 biography of J.D. Salinger into a personal narrative. If this was his vision quest, Beller needed directions. Someone should’ve told him you can’t get there from here.

The path to Salinger is an accidental one for Joanna Rakoff.  He looms large throughout her memoir, My Salinger Year (Knopf, June 2014), but he’s a gentle giant. Rakoff writes as a young woman who’s landed a job as an assistant at a storied literary agency. Her reflections are brought to life in vivid detail, and there’s plenty of nostalgia to go around.

Her job description, is, well, never described to her, but one thing’s certain: it’s a tough gig. It’s a competitive industry, steeped in machismo, and Rakoff keeps her poetry private. Her boss, the president of the agency, is a woman, “part Lauren Bacall, part Don Corleone,” one who smokes unfiltered cigarettes and commands respect with a nod. This agency is old-school, and its backlist includes Faulkner and F. Scott Fitzgerald.

Rakoff’s boss represents J.D. Salinger—and the aura of trespass is around her, too. Every day, bundles of fan mail addressed to Salinger arrive to the agency and Rakoff is tasked to winnow those stacks. All she has is an IBM Selectric Typewriter, a “thanks, but no thanks” form letter, and whole lot of time. Eventually, Rakoff breaks rank and mixes things up.

It’s a year full of mix-ups. The largest one of all is Salinger’s decision to publish another book. An old story from The New Yorker, but a new book nonetheless. His decision to use an obscure publisher (a one-man show out of Virginia), incites confusion and consternation within the agency. The prospect of it all sends our solemn, Mad Men-esque office into a tizzy.

When Salinger finally appears, he’s kind to Rakoff. She’s certainly his type: bookish, waifish and without any academic aspirations or interest in photography. He suggests she write every day and encourages her poetry. Overall, their brief interactions are a welcome exception to the lurid stuff we’ve read about him through the years.

Time stands still at this agency. Salinger’s death won’t even change that. Then, it is just as the Hassidism describe the world to come, “everything will be as it is now, just a little different”.

The good ones usually are.

Aaron Sommers writes and teaches in NH. His fiction has been featured in The Emerson Review and Amoskeag, among others. He lives with his wife and daughter in an old colonial, on the more inaccessible side of a mountain. You can follow him on Twitter @aaronsommers and read about him at www.aaronsommers.com.