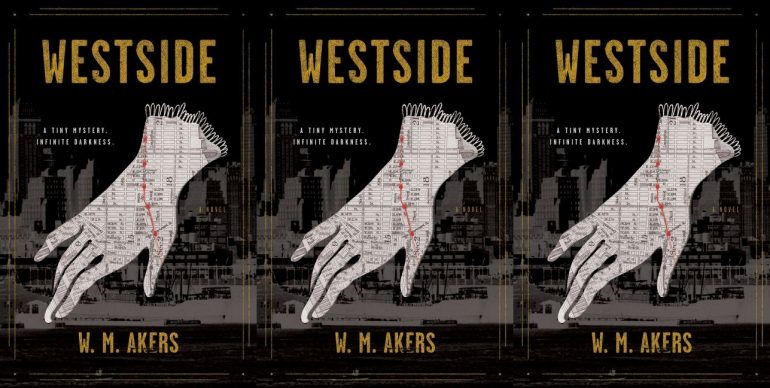 Every time I open W.M. Akers’ debut novel, Westside, out this past May, I’m struck by the delicious thrill of a detective novel (a woman-centered one, no less) full of surprises and a world fully formed in its foreignness. Not only is the plot crackling with mystery and suspense, a weirdness both tantalizing and terrifying, but every detail in Akers’ fantastical 1921 version of Manhattan has been thought out and fully constructed. From a defunct subway system used as an enormous underground bootleg liquor factory to a West Village street that has turned into a creek, the scenery is vivid, allowing me—no, forcing me—to see it all in detail. It is such a pleasure to drop out of the constant stream of bad news and apocalyptic predictions and into this lush landscape of bizarre buildings, strange stores, magical nature, and page-turning suspense.

The world of Westside is one in which the west side of Manhattan has become so corrupt and unsafe that the city was compelled to build a wall to cordon it off from the east side. Like a limb that’s been strangled by a tourniquet for too long, the west side loses its urban blood flow. Trees grow to unprecedented heights, water flows through the streets, buildings crumble unprovoked, and in the uninterrupted darkness of night, people and things disappear without explanation. The west side of New York is at once sublime in its wildness and rife with all the dangers of an urban jungle. Within this gorgeous chaos lives Gilda Carr, a private investigator specializing in tiny mysteries (“‘Those impossible puzzles that burrow into our brains like splinters and keep us awake at night’”) and mourning the unexplained and uncertain death of her father. Gilda becomes involved in a mystery much bigger and more violent than she had signed on for as she investigates, gaining insight into her personal history even as she might lose her sanity or her life.

Reading Westside is a magnificent experience, but it is also uncomfortable, to say the least—the world it depicts is not so unfamiliar after all. As fantasy novels often do, the book offers a disturbing allegory for our times: A wall built to separate what the United States has deemed worthy from what it has determined unworthy, with an entire population dying violently as a result. A corrupt regime of self-appointed leaders who rule on promises of false safety, life-threatening booze, and isolationist hate. A natural world so thoroughly abused that it begins to fight back. The similarities begin to add up, and I squirm a little as I read on, disturbed by how true this figment of the author’s imagination rings.

What makes this sensation even more confusing is that, rather than creating a dystopian future, Akers has created a dystopian past. The year 1921 serves this novel well, as it was a moment in time when rotgut liquor, poorly treated PTSD, and the dissolution of previously upheld gentility offered inspiration for all sorts of malice. In this sense, the novel seems to imply that we are moving backwards, that the immense technological progress and wealth inequality we are experiencing today are just as likely to dump us back into a dangerous, unhappy, and much less progressive past as they are to propel us into a future full of the potential for change.

Within this fairly recent past, however, the characters of Westside are yearning for a time that came before. From the longing of the protagonist for her disappeared father to violent gang members reminiscing about the good old days when they cut anyone who crossed them, the characters of Westside are just as nostalgic as many Americans are for a time when they perceived their world to be simpler, brighter, and more just, even if its separate components were violence, greed, and the disenfranchising of others. The result, for the reader, is the hallucinatory sensation of escaping our tumultuous present to read about a past that is at once immersed in memory while it is also futuristically catastrophic.

Westside seems to serve as a warning against nostalgia. While many of us agree that reminiscing about the past is not as useful as planning for a better future, and that previous events are never as glorious and just-right as they appear through the sepia lens of memory, Akers takes this argument further: historical amnesia—be it the kind that makes us want to make a country great again or the kind that leads us to corral and cut off entire populations of people because they look or sound different or to deem certain places or people bad and unworthy—can push us further back into the past than we’d hoped for.