Home
»
Critical Essays
»
Kevin Young and the Age of Euphemism 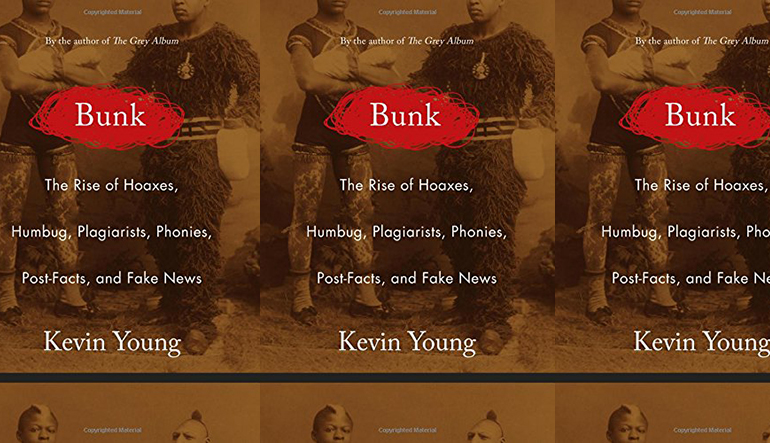 The morning after Beth Reinhard’s co-written article about allegations of “sexual misconduct” against US Senate candidate Roy Moore was published, the Washington Post reporter received a mysterious email. “Roy Moore in Alabama,” wrote someone under the name Lindsay James. “I might know something but I need to keep myself safe. How do we do this?” In the two weeks that followed, Post reporters spoke with the mystery woman via encrypted text messages and over the phone before meeting in a shopping mall, where James explained she’d had a relationship with the former Alabama judge in 1992. She was 15 at the time. He was 45.

Neither Lindsay James or her story, it turns out, are real. According to an exposé published by the Post on November 27, the woman’s name is Jaime Phillips, and she’s affiliated with Project Veritas, “an organization that targets the mainstream news media and left-leaning groups.” Through “false cover stories and covert video recordings,” the group’s “undercover reporters” attempt to expose what they perceive as liberal bias. This was, the Post’s executive editor Martin Baron explains, “a scheme to deceive and embarrass us. The intent by Project Veritas clearly was to publicize the conversation if we fell for the trap.” In other words, it was a hoax. And a hoax, Kevin Young writes in Bunk: The Rise of Hoaxes, Humbug, Plagiarists, Phonies, Post-Facts, and Fake News, “seeks fame and to defame, often at the same time.” A sort of parasitism.

In his eleventh book, Young recapitulates some of America’s most notorious humbugs, from P. T. Barnum’s Feejee Mermaid to James Frey’s A Million Little Pieces and Rachel Dolezal’s blackface. While his text primarily works to link the rise of hoaxes to “race and racialism,” Young also links this evolution to that of American media. Through his meticulous research and deft storytelling, Young provides a useful guide to how we might interpret—or cope with—our current “Age of Euphemism,” characterized by the unrelenting torrent of alternative facts and “untruths” in every news cycle.

In Bunk’s first chapter, Young credits the Great Moon Hoax of 1835 with creating “the most popular newspaper in the world, and practically the very industry of the modern press itself.” When The Sun published an article in August of that year alleging that notable astronomer Sir John Herschel had spotted life on the moon, sales skyrocketed. (Herschel was a real astronomer. He had not, of course, discovered life on the moon, but he was in South Africa and too far away to be reached by other news outlets for confirmation.) At the time, the New York-based Sun was a penny press, a brand new kind of newspaper relying on “support not by sponsors (as earlier papers had) but by advertising” as well as what Young describes as an all-too-familiar “sensationalism as news.”

But the Sun’s circulation expanded along with the story at an unprecedented rate. “By means of a telescope of vast dimensions and an entirely new principle, the younger Herschel […] has affirmatively settled the question whether this satellite be inhabited,” the first article read. Supposedly written by the astronomer’s assistant Dr. Andrew Grant, it was quickly followed by five more articles describing the moon’s human-like inhabitants. “They averaged four feet in height,” Grant claims, with “yellowish” faces. They had “short and glossy copper-colored hair” all over their bodies and darker, “closely curled” hair on their heads. To paraphrase Young’s cutting analysis, these accounts, which were actually crafted by reporter Richard Adams Locke, create a kind of racial chimera. “These creatures sound like such a range of racial types that it is hard to know how to read them now,” Young writes.

It seems this deception spread in large part to the proliferation of the unconventional penny press, which also spurred a “new reading public.” “Voyeuristic as it is, the hoax demands an audience,” Young explains; “you cannot craft a hoax no one sees.” That is to say, the Moon Hoax was not successful because it remained hidden, but because it was public.

Like the hoax that “proclaims itself mightily,” phonies, impostors, and fake memoirists also tend to demand an audience. Ergo, it’s unsurprising that so many of them were wannabe writers. Later in Bunk, Young recounts the 2011 case of Gay Girl in Damascus, a blog written by a white guy from Georgia posing as an Arab-American lesbian living in Syria. Under the name Amina Arraf, Tom MacMaster wrote about a range of political and social issues, including unrest leading up to the Arab Spring. MacMaster was a “publishing failure” who had attempted to sell a novel and various other pieces under his own name to no avail. His online persona, on the other hand, was taken seriously by readers and reporters around the world.

Eventually the charade got out of hand. “When faced with how to end the hoax,” Young writes, “MacMaster decided to have Arraf kidnapped, claiming, bizarrely, that he thought that might end interest in her case.” Her purported abduction was covered by the biggest news outlets, which inevitably led to the hoax’s debunking. Through such a readership, MacMaster-as-Arraf wielded a dangerous and misleading impact. “This is the infectious and dangerous quality of the hoax,” Young declares: “[T]he true stories in all senses […] that the hoax makes use of end up not quite heard.”

All that is to say, in the Age of Euphemism, a debunked hoax somehow isn’t necessarily a failed one. False stories like MacMaster’s and Phillips’ “plagiarize another’s pain,” succeeding not only in the creation of fame and infliction of defamation, but in the erasure of “those stolen from.” Rigorous fact-checking uncovered Phillips and Project Veritas’s scheme, but it did not lessen the blow to Moore’s accusers, which many Alabama Republicans still refuse to believe. In fact, some even insist these women are part of a Democratic conspiracy.

In his cerebral coda, Young emphasizes a vital difference between modern hoaxes and the Moon Hoaxes of the nineteenth century. “While imposture merely masks, euphemism misunderstands and misspeaks,” he writes. And it often insists on misspeaking. From poet Kenneth Goldsmith, who insisted on his right to “repurpose” Michael Brown’s autopsy report, to Donald Trump’s insistence that nobody has more respect for women more than he does, the Age of Euphemism already seems overflowing with bunk.

Though Young does not find the happy ending he admits to hoping for, he does remind the reader that insistence—and virality—works both ways:

What if truth is not an absolute or relative, but a skill—a muscle, like memory—that collectively we have neglected so much that we have grown measurably weaker at using it? How might we rebuild it, going from chronic to bionic?