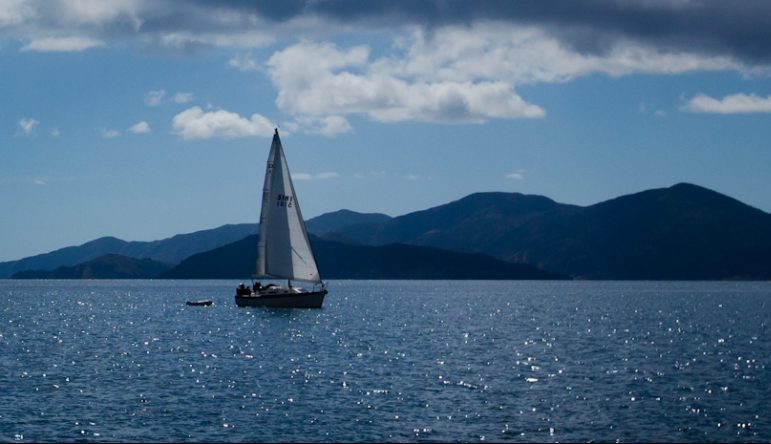 As both a poet and a songwriter, I’m constantly journeying between two distinct ways of making art out of words.

Working simultaneously in multiple disciplines has its challenges, but for me, poetry and songwriting are inextricably linked, and they feed each other. I work on poems backstage, and write songs at poetry residencies; I like to invite poets to read at rock shows or house concerts I set up. Both songs and poems, after all, are born from the same mysterious galaxy (blood), and then completed through craft and revision (sweat and tears).

Still, I experience the act of working with words quite differently in the two forms. By the way, I’m talking here about poems that live primarily on the page, not spoken word.

For me, writing poems is like sailing without any wind or current. A poem generates its own movement using the arrangement of words on a page. If you’re going to get anywhere (even just deeper into the eternal present), you need a motor. You have just two tools to build that motor: letters, and white space. It’s a kind of miraculous alchemy: from these simple tools you build a tremendously powerful motor through meaning, structure, mood, tone, or even just sound. The muscles of a poem are deep and internal, like the tiny muscles around our vertebrae.

Writing song lyrics, on the other hand, is like sailing on a windy day. Even without any words, the music already propels a song. So as a lyricist it’s a different game: your job is not to create all the movement, but to adjust the sails of the words, to create a second movement that plays off the movement that’s already happening. You can match the lyrics to the music, or use the words at an angle to the music and propel yourself off of that tension. If you’re also writing the music, like I do, you can change them both at once, which can turn a song from a dirge to a dance hit in two seconds. And of course it’s not binary; infinite variations exist in the relationship of the words to the music, not to mention how the words are sung – since songs, unlike poems, can’t live on a page.

That’s one of the things I love about the great Leonard Cohen. Even in a stripped-down presentation, you can hear how the relationship of the music to the words fluctuates. In Chelsea Hotel No. 2, for example, the music is uniformly sweet, winsome, nostalgic; the lyrics are based in that feeling as well, but they’re more barbed, a bit vinegary at times, sardonic. This tension gives the song its exquisite torque and makes it more than simply a beautiful modern folk-song.

(If you speak Spanish, you can see that they declined to even translate the most explicit and colloquial line of this song literally!)

This is why I’m never enthusiastic about books of song lyrics presented as poetry. It’s not fair to the words. They were written against the music, and they don’t make sense without that information. Setting published poems to music, on the other hand, is a shockingly fun way to write a song. I’ve been working on setting Emily Dickinson poems to music for a couple years now. I hope Emily doesn’t mind our posthumous collaboration… I like to think perhaps she enjoys sneaking out to a rock club every now and then.

Alicia Jo Rabins, Brooklyn-based poet and musician, received her MFA from Warren Wilson. Her poems have appeared in Boston Review, 6 x 6, and Horse Poems (Everymans Library), and she is the recipient of a Workspace residency from LMCC and waiter scholarhip from Bread Loaf. As a musician Rabins tours internationally; her art-pop song cycle about Biblical women, Girls in Trouble, was released on Jdub Records in October 2009 and named one of the year’s best releases by Largehearted Boy. She plays violin in Golem, NYC’s acclaimed klezmer-rock band, and was selected to tour Central America as a musical ambassador for the United States in 2009. She loves spiritual instructional manuals.