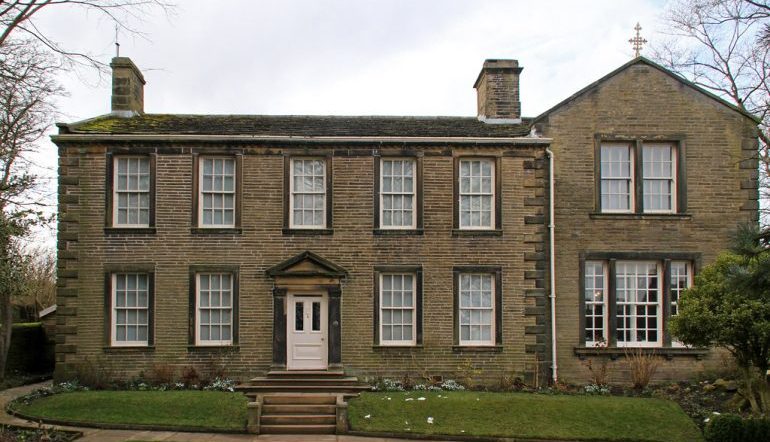 Last month, on some courageous and curious whim, my husband and I brought our nearly-five-year-old daughter and nearly-three-year-old son to Haworth, England so I could research and write at the Brontë Parsonage Museum.

The Parsonage—the Brontës’ former home—is now a lovely little museum. As you walk through the house, you can imagine Charlotte, Emily, and Anne scribbling away at a big table in the sitting room across from Mr. Brontë’s study. You can climb the stairs to find recreated bedrooms, a “children’s study” the size of a middle-class American’s closet, and the girls’ brother Branwell’s studio, strewn all over with copies of his drawings and poems, a pretend-bottle of laudanum spilled on the floor. My daughter Willa spied on Branwell’s desk a copy of one of the last drawings he made: a skeleton approaching a sleeping man in his bed. She asked, “Why did he draw a skeleton?”

“Because he liked them?” I said. I’m completely terrified of having a conversation about death with her, and yet I’ve brought her to a memorial where there are glass cases filled with tiny handwriting, mourning bracelets made from the dead sisters’ hair, watercolor flowers, cartoons, letters, paint boxes: a shrine to a clutch of precocious children sadly arrested by death before any of them reached the age of 40.

At the museum, Branwell himself is construed as mainly problematic—the brilliant sisters’ ineffectual, drunk brother with a huge ego who never made anything of himself. The sisters, however, are painted in a more positive, if complicated, light: there’s the solemn reverence for Emily’s poetic soul, a brisk appreciation for Charlotte’s social scheming and unrelenting work ethic—and Anne? In the window of the museum’s book shop, someone’s taped a comic called “Dude Watchin with the Brontës,” in which Emily and Charlotte commiserate over “passionate and mysterious” men Anne calls “alcoholic dickbags.” Beside it is a mock-vintage photo of two women in bad historical dress throwing shade, titled Withering Looks.

There’s something for every Brontë tourist—the goth, the foodie, the seeker, the day-tripper, the scholar, the satire-maker—in today’s Haworth. You’ll find atmospheric pubs, inns, bed and breakfasts, holiday homes, vintage clothing and record shops, cafés. In the nineteenth century, however, Haworth was mainly populated by poor mill and quarry workers, its layout mirroring its social hierarchy: at the top of a hill sits St. Michael’s, Haworth’s church, and its disorienting forest of headstones. Behind it is the Brontës’ home, floating in a manicured garden as if on some quasi-Olympus.

Architect and engineer Benjamin Herschel Babbage described Haworth in 1850 as “very hilly and bleak, as there are but few trees to arrest the wintry winds.” Babbage had been summoned to the village by Patrick Brontë, Perpetual Curate of the Haworth Parsonage and father to those famous literary siblings, to address the abysmal sanitary conditions and high mortality rate in Haworth. In his lengthy report, Babbage seems earnestly taken aback by the town—its geographical situation as well as its existential one. Many people worked combing wool in their own bedrooms, a task that required high heat in buildings with little ventilation. Human and animal waste and blood and offal from slaughterhouses infected the water supply, as did decomposing bodies in the overcrowded graveyard. While illness and death were ever-present concerns no matter one’s age, children were most adversely affected; very few saw their sixth birthday. I imagine Reverend Brontë grew so heartsick over all those funerals, both for his parishioners and his own children, that he proceeded to lean on what rudimentary medical science was available to him, to learn what he could, and petition the government for help. (It took years, however, after the damning Babbage report was published for authorities to finally act.)

It’s no wonder the Brontës escaped out their kitchen door when they could. If Haworth huddled perpetually under a cloud of pollution and disease, the moors offered fresh air and space in which to read, think, and create away from social obligations. Just behind the Parsonage stretches a landscape rich in stone walls, digressive flocks of sheep, grasses and heather, and the shadows of clouds that change the land’s color from green to purple to grey to dun all in an instant.

Walking here, it’s easy to get caught up in the romantic image of Emily traipsing alone through fields and up windswept hills, commiserating in ferny dales, secreting away her stories. Indeed, the moors themselves are part and parcel of the Brontë tourist’s experience. There are pricey guided tours, paintings in every shop, signposts on every corner in a variety of languages leading to some of the Brontës’ favorite spots. You can even listen to a few of Emily’s poems set to music as you wind your way past the graveyard up to the old Pennine Quarry. The Romantic notion of the individual genius alone in nature is alive and well in Haworth, making it easy for us to forget that for the farmers who worked the land, the moors weren’t Romantic. The vast distances between neighbors, mercurial, dangerous weather, and back-breaking labor made life extremely difficult.

It’s easy to forget, too, that the Brontës didn’t create in so-called Romantic isolation but rather wrote, played, and invented in concert with one another and with the land itself, building imaginary worlds together inspired by the landscape around them as well as by their library of books and magazines and by the local stories and folk tales their housekeeper Tabitha (Tabby) Aykroyd— a working-class Haworth native—shared with them. “We wove a web in childhood / A web of sunny air,” Charlotte wrote, describing how the siblings knitted together the strands of their experience and made an emanant record of human imagination. It’s not by accident that Charlotte begins her poem with the collective “we,” then proceeds to use “weaving” and “web” as metaphors for her siblings’ collaborations.

My husband is an only child, and my siblings are 10 and 14 years older than me, respectively. I’ve always been fascinated by siblings who, being so close in age, find in each other playmate and creative collaborator. Our own children are two years apart and inseparable, their love for one another astonishing—a daily source of surprise. The Brontës, I imagine, shared an even richer closeness, born from early tragedy and daily struggle. From childhood, they held each other’s intellects in high esteem and together made a web—a story-catcher—out of their own disparate interests, their ideas acting as warp and woof, their mutual love and respect a catalyst for their later works, Jane Eyre, Wuthering Heights, and The Tenant of Wildfell Hall. If anything, the Brontës teach us the power of collective creativity, transmuting the cliché of Romantic isolation into a story about the siblings’ dedication, teamwork, and resourcefulness. Yes, the Brontës were often alone, but they were alone together, and in an environment circumscribed by disease and death, they managed to flourish. I don’t imagine my children will face the specific concerns the Brontës or other Haworth children faced, but dwindling resources and a threatened planet require me to consider how they might harness their creativity in positive ways.

I was anxious to see if the landscape around Haworth still inspired the same kind of collaborative play in our own children, so somehow we managed to persuade them to follow us from the Parsonage down a sheep’s path, across the grass, down to the beck with its flash of falling clean water now called the Brontë Falls, then up again—up along the moor—all the way to the ruins of an old farmhouse called Top Withens, a place some believe Emily used as a model for her fictional Wuthering Heights. We found a dead baby rabbit along the way and stopped to look, bowing our heads. “How beautiful she was,” I said. “Was? Well, where is she now?” my daughter asked, only to drop the question and gallop after a pair of terrified sheep, giggling and shouting. She and her brother called themselves “adventurers,” toting a pair of binoculars each, cheering each other on with a hearty “adventurers never quit!” They scrambled up rocks and down ledges, making something alone together, a web for story-catching and world-building, a collaboration not unlike the Brontës’, who found in nature not simply Romantic repose but the grist and grease behind real change.