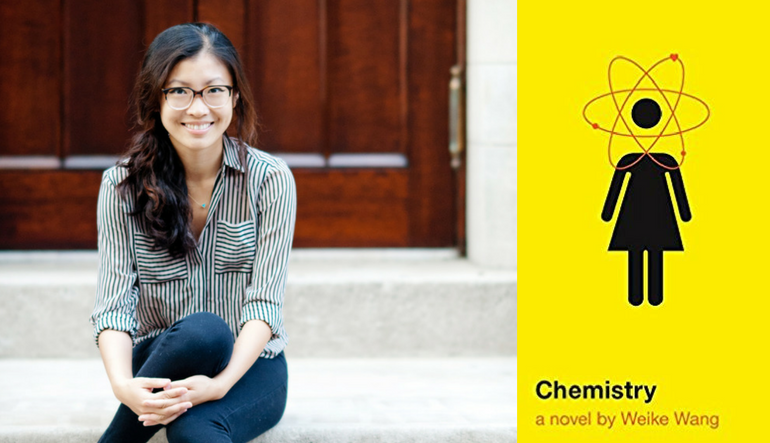 Ploughshares is pleased to present Weike Wang with the twenty-seventh annual John C. Zacharis First Book Award for her book Chemistry (Knopf, 2017). The $1,500 award, which is named after a former president of Emerson College, honors the best debut book by a Ploughshares writer and alternates annually between poetry and fiction. The following is an excerpt from the Ploughshares Winter 2017-18 issue.

Chemistry began as the short story “Conversations with My Father,” published in the Summer 2016 issue of Ploughshares, guest-edited by Claire Messud and James Wood. Wang began thinking about what that protagonist might be like when she grew up and whether she might have an existential crisis in adulthood. Chemistry grew out of those questions and was further inspired by Wang’s own scientific background–an undergraduate degree in chemistry and a doctorate in public health from Harvard University.

Wang credits the objectivity and thorough thinking that is endemic to the sciences  with informing the way she thinks and writes. “I believe that much of good writing is clarity and the author’s ability to look at the characters from many facets, to look at a situation from many facets. I think my research background has helped me with that,” she says.

Research also instilled in her the principles of a strong work ethic–a quality that has been central, for her, to the writing process. “Maybe 1% of writing is talent and 99% of it is just really, really, really hard work,” she says. “You have to sit still for a long time and think, you have to do it alone–you also have to be okay spending months on a project and throwing it away. That’s pretty much scientific research in a nutshell.”

Like science is for Chemistry’s protagonist, engaging with this writing process is a compulsion for Wang. “I feel as if I have to get certain stories out of me, and also certain feelings, thoughts, characters. Otherwise they would just sit with me and plague me,” she says.

This compulsion led to the decision to pursue an MFA in fiction, which she began at Boston University during the third year of her doctorate–right before her doctoral qualifying exams. This challenge was intentional: “Pursuing arts is never going to be easy. So I had to love it and I needed to convince myself that I loved it in face of other things. I wrote any time I could.”

While at BU, Wang studied with Amy Hempel, who became her mentor and a particularly strong influence on her motivation. “I don’t think I would be here without her. She was an extraordinarily generous and kind teacher. I still find myself remembering exactly what she said in class and understanding it better now. I also knew her first as my teacher and second as the literary giant that I came to realize she was.”

Now that Chemistry is on shelves, Wang is currently working on her second novel. She has yet to share any details on the project. “I am somewhat superstitious so I feel if I talk about it too much it will never happen. I generally work best in a cave until I have to come out and show someone the work.”