Home
»
Uncategorized
»
Write As If…

I have a problem with inversion. I’ve never been able to do a cartwheel, a handstand, or a headstand. On my high school swim team, I was consigned to the backstroke because I couldn’t dive off the blocks. 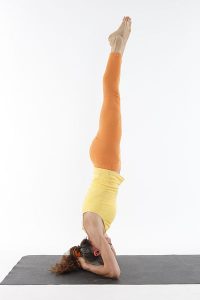 This is not me. But I’m getting there…

(I balk, I panic, I freak out, I fail. It might be some instinct for self-preservation, or perhaps I wasn’t swung by the toes enough as a child.)

Over the past ten years, I’ve developed an otherwise dedicated and intense yoga practice that happens to include curling up in a little ball whenever people start balancing upside down.

And then a few weeks ago, my Ashtanga teacher said something so weirdly profound that at first I dismissed it as yoga-patchouli-lemongrass speak. “Don’t just try to do a headstand,” she said. “Do a headstand as if you already knew how.”

This was so different from the usual advice (Strong core! Straight legs!) that I decided to try. It would require a mental leap, but then mental leaps are what writers do best. It was more acting than yoga: I am a person who loves headstands. What’s my motivation? Upside-downness.

I was so into my role that I wasn’t even shocked when my legs started floating up, when my body locked into a balance that felt as familiar as bike-balance, as walking-up-stairs-with-a-coffee balance.

I started thinking that night about the writing students I’ve seen struggle with confidence in their projects and their own skills. They’ll often stop and examine their insecurities, as if dissection and analysis might get them past the fear that they’re writing the whole thing wrong. I wonder, though, if there isn’t a more expedient solution.

Write as if you knew what you were doing.

Write as if you loved this project as much now as the day you started it.

Write as if you had all the answers.

Write as if you knew a revelation would be hiding behind the next sentence.

Write as if no one had ever messed with your confidence.

Write as if no one will ever be allowed to judge what you write.

Write as if you were seven feet tall.

Write as if every decision you made were guaranteed to be the right decision.

Write as if all your failures happened in another lifetime.

And for my next trick…

Write as if you hadn’t been allowed to write a word for the past decade, and you’re finally free.

Write as if you had no other obligations in the world, as if nothing else mattered.

Write as if a reliable psychic promised you’d win the Pulitzer for this.

Write as if the only reason you narrowly avoided that head-on collision when you were seventeen was so that you could live to tell this story, because the world needs it.

Write as if it it’s the last story you’ll ever get to tell.

Write as if there were someone out there whose happiness depended on reading this brilliant thing you wrote.

Write as if your life depended on it.

(Don’t you remember? It does.)

Then turn around and edit like the most critical bitch in the world.