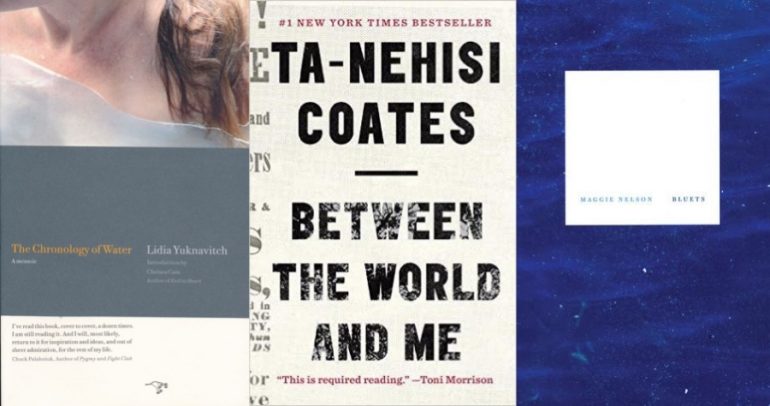 The age of media and internet is one of fractal, ephemeral bodies—well-curated images of the self from certain angles and frozen in time, dust-coated corpses at the aftermath of a quake that provide little context, statistics and numbers that break down how many and what ages and when, yet provide little to no feeling. The body in writing is a vessel to feeling—to empathy. Reading Lidia Yuknavitch, Maggie Nelson, Ta-Nehisi Coates, among others, is to feel.

At a recent lecture, Maggie Nelson said that a “ringing sense of mortality […] underscores everything we write.” The body, unlike the internet, is finite. It is deeply personal and universal—we all have one, but we only ever experience our own. Lidia Yuknavitch says, “we live by and through the body, and the body, is a walking contradiction.” Meaning, a body can be both beautiful and violent, and often fosters both simultaneously—new life and eventual death. Lidia Yuknavitch’s anti-memoir The Chronology of Water opens with a stillborn, rooting the reader in the author’s body at a certain place in time.

Genevieve Hudson notes that Yuknavitch’s “prose inhabits the experience of living inside of limbs and guts and skin. As a reader, it allows us to feel the experience in a tangible way instead of just noting the emotional register in the character from afar.”

Maggie Nelson writes not just about her own physical experiences in Bluets, but also of her friend’s body as it changes after an accident:

Over time my injured friend’s feet have become blue and smooth from disuse. Their blue is the blue of skim milk, their smoothness that of a baby’s. I think they look and feel very strange and beautiful. She does not agree. How could she—this is her body; its transformations, her grief. Often we examine parts of her body together, as if their paralysis had rendered them objects of inquiry independent of us both. But they are still hers. No matter what happens to our bodies in our lifetimes, no matter if they become ‘like pebbles in water,’ they remain ours; us, theirs.

Ta-Nehisi Coates begins Between the World and Me by recounting an interview, where “the host of a popular news show asked me what it meant to lose my body.” The author and the newscaster are not physically in the same room. “A satellite closed the miles between us, but no machinery could close the gap between her world and the world for which I had been summoned to speak.”

Coates mentions “the body” nearly a hundred times in over a hundred and fifty pages. When he writes about “her world and the world for which I had been summoned to speak,” I interpret “world” not as social, economic, or political spheres, but as the body. We can only ever speak to our own bodies, and yet certain circles forget this and encroach on the bodies of others, forgetting that there are gaps between us. Yet Coates does not forget—cannot forget. He writes to his son, “The women around you must be responsible for their bodies in a way that you will never know.” The New Yorker adds, “the lesson stops there. The dangers of living in a black female body are mysterious, forever unknowable.”

Except that the dangers and joys are not unknowable—not to black females, and expressed by the likes of Toni Morrison, bell hooks, and Claudia Rankine. Coates recognizes the limits of his knowing—the book is grounded in his experience—and he doesn’t speak for black women. Mainly, he admires and adores them, yet doesn’t claim to know what it is like for them to be, to exist.

Lidia Yuknavitch writes, “With Marguerite Duras, you must lie down on a bed in an apartment in a foreign city—foreign to you—foreign enough so that you become the foreigner.” To inhabit someone else’s body in prose is to be a kind of foreigner—an outsider with an insider’s access. And isn’t that why we read? To inhabit other perspectives or forms, to empathize, all the while understanding the limits of our physical being?