Home
»
Writing
»
As From My Window I Sometimes Glance 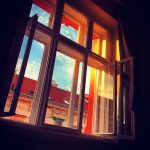 Lately, I spend a lot of time gazing out my window.

In quiet moments with a cup of coffee and the whole day unspooling before me, I sit on the ledge looking at the street below and think of Alicia Ostriker’s poem, August Morning, Upper Broadway. “As the body of the beloved is a window,” she starts near-philosophically. “…and as the man on the corner with his fruit stand is a window,” she writes a few lines later, materializing the frame. It ends with the unpunctuated possibility of a long view:

let us call this scene a window looking out
not at a paradise but as a paradise
might be, if we had eyes to see

the women in their swaying dresses, the season’s fruit
the babies in their strollers infinitely soft: clear window
after clear window

When I’ve switched the coffee mug out for a glass of wine, am willfully avoiding a deadline, and refuse to pull myself away from the street’s unfolding drama, I’m a little harder on myself. I think of that line in Michel de Certeau’s The Practice of Everyday Life after he beautifully describes being lifted out of the city’s throes, its control, by ascending to a higher vantage. “One’s body is no longer clasped by the streets that turn and return it according to anonymous law; nor is it possessed,” he writes. Then, just when you think you’re free, de Certeau throws a sucker punch to the stomach, making the surveillance and power dynamics of your elevated gaze painfully apparent: “[The viewer’s] elevation transfigures him into a voyeur.”

There’s a few reasons, I guess, for my newfound pastime.

First, there’s the novelty of a new location. I just moved from a four-bedroom household replete with a backyard and front porch in the semi-suburbs of the American South to a two-room, three-story walk-up in the heart of a European capital. The most exciting passersby from my last view were my neighbor, Hank, and his dog, Precious, out for their twice-daily walk. I don’t want to understate the excitement there. Hank used to play semi-professional basketball and Precious is as infinitesimal beside him as her name indicates. They are a vision! But, let’s just say, I see a little more foot traffic with my newly gained altitude and location.

Now, I take notes. This kind of casual, incessant cataloging is a lifelong habit—the lines of notebook scribble that give shape to my days.

I wonder if this is how it started for the mercurial photographer, W. Eugene Smith, when he left a well-recognized staff position at Life magazine in the 1950’s and set up shop in a fourth story loft in Manhattan’s wholesale flower district. The objects of his visual studies were tied to this Sixth Avenue block—mostly jazz musicians, friends, artists who dropped in, or people he caught traipsing by on the street below. Some of my favorite of Smith’s photographs are from this last set which he called “As From My Window I Sometimes Glance.” The black and whites are painfully predicated upon their chance timing: the lady lifting her hand to hail a cab from under an umbrella; the little girl running a precarious gauntlet of cut flowers from a shop doorway; a musician balancing the weight of his encased upright bass just so; the shift of the wind to drill sleet into the faces of vendors who have no choice but to drag their carts in inclement, punishing weather; the delivery man jumping from his truck cradling the most beautiful pie. Smith took over one thousand rolls of film—about 40,000 framed and focused exposures—and recorded 1,740 reels of audio during his eight years in the loft. After some 14 years of deciphering the prolific archive, Smith’s biographer, Sam Stephenson, wrote, “If this wasn’t my calling, God help me.”

Second justification for my rampant window looking? I’m supposed to be writing. On fellowship to complete the last of a years-long project, the pressure and the punchiness of organizing day-after-imbricated-day of prose production is both a gift and a struggle. The window sash flung open is the distraction par excellence. Smith wrote to Ansel Adams in 1958, “Always, there is the window. It forever seduces me away from my work in this cold water flat. I breathe and smile and quicken and languish in appreciation of it, the proscenium arch with me on the third stage looking it down and up and bent along the side and the whole audience in performance down before me, an ever changing pandemonium of delicate details and habitual rhythms.” For those of us obsessed with the narratives both inside and outside the frame, the window’s aperture presents like a not-so-minor miracle.

Finally, though I’m not unhappy, I will admit to being a little lonely. Far away from friends and familiar scenes, in a foreign place where the natal language and inherited histories are indecipherable to me, with work that most often is completed in solitude, the window is a lifeline. The grandmothers carrying shopping bags in both hands, the teenagers loitering at the corner catching Pokemon while they sip soft drinks, the dog walkers so continentally untethered from their respective pooches, feel like promise. Even the warm glow of the tram’s interior passing perfunctorily along the river at night, the suggestion of all those people grasping to stay vertical and headed in the same direction, bespeaks a potential of being seen, of being understood.

“But leave me a little love,” Carl Sandburg pleas in his 1916 poem At A Window even while acquiescing to the worst of material hardship—poverty, pain, degradation. He writes, another of his love letters to the cruel city:

Let me go to the window
Watch there the day-shapes of dusk
And wait and know the coming
Of a little love.

When you have lived a long time in the alms basket of words, the shape of life caught from a glimpse at the window is enough of a scrap on which to subsist.