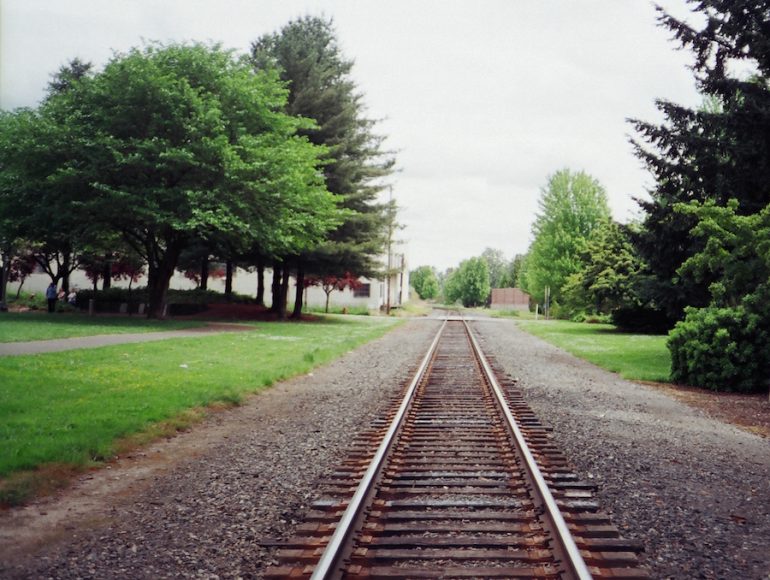 Sara Majka‘s debut story collection, Cities I’ve Never Lived In, begins with movement: “Maybe ten or eleven years ago, when I was in the middle of a divorce from a man I still loved, I took the train into the city. We were both moving often during this time, as if it were the best solution to a shattered life: to move from place to place, trying to thread together, if not marriage and our lives, then something in ourselves.”

Why do we travel, and how do we write about why we travel? As if addressing the difficulty, the first line of Cheryl Strayed‘s Wild is: “My solo three-month hike on the Pacific Crest Trail had many beginnings.”

Sara Majka’s beginning is straightforward—a character ten years out from the middle of a divorce recalls taking a train, and in the same breath, recalls the reason for all that movement: “trying to thread together […] something in ourselves.”

The same might be said for the movement of Hannah Tennant-Moore‘s main character, Elsie, in Wreck and Order. The novel is divided into sections titled by the place in which they are set: Columbo, Kandy, and other various locations in Sri Lanka, as well as Paris, France, Carpinteria, California and Brooklyn, New York. If the novel sounds sprawling, that’s because it is—Elsie foregoes college to spend a year in Paris, where she feels alone and adrift, despite and because of her love of the French language, which abandons her upon arrival. Looking back on the experience years later, comparing French to an abusive lover, she writes, “Why did I take this as my fault, a barrier formed of my own incapacity, an incapacity I needed to remedy if I ever wanted to belong to anything worthwhile? Whatever made me so convinced that the only hope for my life was to prove my connection to a country in which I hated being myself?”

Travel is not always fun or pleasant, and that’s what’s so riveting about books like Cities I’ve Never Lived In and Wreck and Order. Instead, it takes on a sort of banal, mundane tinge; a character in Majka’s story notes, “When you travel it is the same—first you know one street, then you learn another, then you go someplace else, until the city unfolds in your mind.” Another notes, “They were only people after all. When you travel you see how many there are, how they fill whatever place you go to.”

So if travel is not all fun and games, if it takes thirty-eight hours to return home from Europe and your luggage is lost by the airline, as this writer recently experienced, then why do we go?

“[…] I went to Poland to find the village my grandparents had emigrated from. I never made it to the village and instead stayed a week in a small hotel off a village square—my room overlooked it—and I would sit in the window and smoke and watch pigeons. […] I imagine that’s why I was in Poland, because I wanted time to think about these things, such as this man and the poem he had written, and the little girl I might not be able to have.” (Majka)

Radically displaced from our everyday experience, we are able to face what we cannot on a daily basis—that which might undo us if dwelt upon. That, or the distance affords us a sense of perspective.

Elsie of Wreck and Order travels to Sri Lanka the first time to gain distance from the life she set up for herself in Carpinteria—including a job at a local newspaper and a tumultuous relationship—and the second time after the end of another relationship in Brooklyn. Sri Lanka as setting affords meditations on suffering, as influenced by buddhist teachings and backdropped by the nation’s recent civil war. Elsie is “ecstatic with the freedom of being unable to accomplish even the simplest task.”

Removed from the United States, from her community and family, the character is reduced to basic needs—shelter, water, food—and the ability to communicate hinders their obtainment. Elsie laments her relative lack of understanding, another perspective given to her by distance: “I feel cheated to be from the one country whose language, culture, and politics everyone else knows. Even after spending thirty hours alone on a plane, I cannot escape the place I grew up.”

Sara Majka writes, “He wanted to start again, but it also frightened him, because there would be nothing to keep them from trying again and again, until it became a repetition, […].” And Elsie’s travel in Wreck and Order becomes a kind of repetition—Carpinteria, Brooklyn, Kandy, Carpinteria, Brooklyn, Columbo. The process of locating oneself in the world takes a lifetime—a process that includes moving, and making mistakes and remedying them, oftentimes more than once. A process that involves a long-term escape, followed by the realization that, “It’s nice to be unmoored, but I can’t just float here forever.” A process of floating, unmooring, and realizing one wants to be moored.

“I am an ordinary person with an ordinary life. Even my acceptance of ordinariness is ordinary, the undercurrent of so many ‘big books.’ Madam Bovary, War and Peace, Freedom. The mistake is always the same: trying to live the life one has in one’s head instead of the life before one, which is endlessly generous if you humble yourself to it as the only possible means of fulfillment.” (Tennant-Moore)

More simply, in the title story of Majka’s debut, when someone asks where the main character is going, the reply is, “No, I said, I’m just here.”

Being here is the point. Travel, and reading about travel, allows us to be present, to locate ourselves in the world, disjointed from where we came from, simply being. Again, from Wreck and Order, “The point is to pay attention to what’s real, not to my imagination. To remember that it’s enough just to sit on a train, seeing, hearing, bouncing, doxing, thinking, letting the mind go blank.”

Why do we seek other cultures and other languages, often at the expense of our sleep, our savings accounts, and occasionally our relationships? And why do we read about those who have uprooted? As Elsie states, “Because we want to live well and we don’t know how.”