Home
»
Reading
»
Your Turn Now to Stand Where I Stand: Growing Up with Little Earthquakes 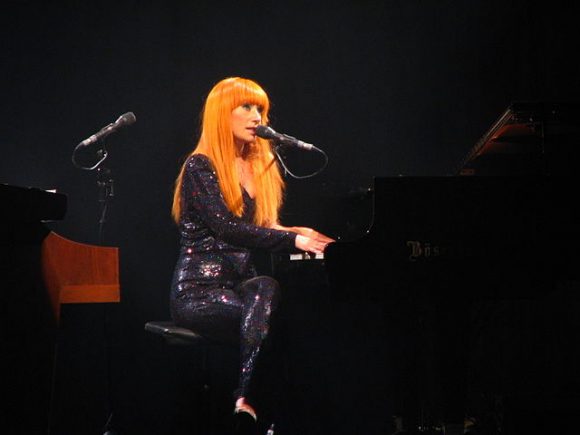 I may not have been the only teenaged boy in America in the 1990s to listen over and over to Tori Amos’ 1992 album Little Earthquakes, but it felt like I was. My female friends all owned it, shared it, loved it. But I don’t remember seeing it in the CD collections of any of my guy friends. It’s not that the album isn’t meant for male ears. In fact, its best songs and most memorable lines are addressed directly to men and boys. It’s just that the album makes no accommodations for the male listener. Years later, Amy Poehler responded to a bit of sexist criticism by snapping, “I don’t fucking care if you like it.” Little Earthquakes was like a 57-minute riff on that theme.

I thought about Little Earthquakes after reading both Kate Leary’s post on “The Female Gaze and the Same Old Songs” and Rachel Vorona Cote’s recent essay on Amos at The Week. Cote writes about discovering Amos’ music as a thirteen-year-old and finding her own voice in the anger at the heart of songs like “Precious Things” or “Muhammed My Friend,” from Boys for Pele. Leary’s post shows why that’s so important for women and girls and, by extension, for society. “The stories we tell shape our understanding of each other, which shapes our culture and our choices,” Leary writes. Too often, she suggests, those stories come from a male perspective, and that warps women’s understanding of their value.

“As a young woman I had one and only one intense and ceaseless pastime, though that’s not the right word, though neither is hobby or passion. I have practiced this activity with religious devotion for longer than I can remember. I have been trying to give it up recently … since around the time my daughter was born. But nearly all of my life has been arranged around this activity. I’ve filled my days doing this, spent all my free time and a great amount of time that was not free doing it. That hobby, that interest, that passion was this: watching boys do stuff.”

In high school, I was a boy who did stuff while girls watched. I played guitar in a band, and we practiced for whole days on weekends. There were often two or three girls—our friends, or girlfriends, or girls we hoped might become our girlfriends—who would sit there for hours while we played. I lived for music back then, and these girls did too, but they didn’t seem to care about the blues and classic rock songs we were rehearsing. One day a friend, a girl who sometimes watched us practice, pulled Little Earthquakes out of her backpack and told me to listen to it all the way through.

I knew it was good music. I could appreciate Amos’ musicianship, the way she could move between the hard rock of “Precious Things” and the strange loopiness of songs like “Happy Phantom.” I got that her lyrics were powerful in their intimacy, and I knew that the a capella “Me and a Gun,” which recounts the time she was raped after performing in a bar, was stunning.

But the album made me uncomfortable. Leary writes about the need for art made from a female perspective, art that shows how it feels to be the object of the male gaze and returns that gaze. That’s precisely what Amos does in Little Earthquakes. The album made me feel seen, and being seen was unnerving. She made me feel ridiculous (“Yes I know what you think of me you never shut up”) and insecure (“My loyalties have turned”). She used humor to point out my selfishness and vanity (“Boy you best pray that I bleed real soon”). And she confused me: she seemed to think about sex as much as I did, but even good sex didn’t seem to alleviate her anger. “So you can make me come,” she sang. “That doesn’t make you Jesus.”

And what about that anger? Rage against rape is understandable, but why did Amos spend so much of the album railing against normal male shittiness? The casual objectification, the dumb comments, the inconsideration? Those weren’t really on the same spectrum with what happened in “Me and a Gun,” were they?

Though I had never heard the term, Amos was introducing me to the idea of rape culture, the notion that rape has its roots in the everyday sense of male entitlement to the female body. It was a concept my female friends understood intimately. Cote writes of her adolescence:

“I had watched boys in my class terrorize female classmates. I had willed my heart to steady as I hurried past a clot of them in the hallway—eyes downcast, shoulders curved—and steeled myself against their nasally heave of laughter. Those boys, they claimed the school grounds as their dominion. And even before I met Tori Amos, I regarded their entitlement as both just and precedential.”

After listening to Little Earthquakes once, I played it again. That didn’t make me more comfortable, but I kept listening. It wasn’t until college that I was able to pick up some of the album’s subtler notes: there’s the vulnerability in “Leather” (“Look, I’m standing naked before you / don’t you want more than my sex”) and the tenderness of “Winter.” In “Silent All These Years,” the song that unnerved me most as a high-schooler, there’s the generosity of “here take hold of my hand,” a line where Amos rescues her man from the humiliation that, moments before, she wanted him to feel.

And there’s “China,” a song about a couple’s longings and misunderstandings—a song I couldn’t have understood in high school because I hadn’t had the kind of complicated, adult relationship it describes. By the time I got to know that song, I was dating another girl who listened to Tori Amos. She put songs from Little Earthquakes and Under the Pink on the mix-tapes she made for when one of us was out of town.

It would be going too far to say I wouldn’t have had a relationship like that if I never listened to Tori Amos. But listening to Little Earthquakes, sitting with the discomfort it provoked in me, was part of my process of growing up, of situating myself as an adult in a world full of other adults. Leary is right to argue that we all spend too much time watching men do stuff. But that lesson can’t just apply to women—men need to learn to hold the female gaze, too.