Home
»
Reading
»
11 Thoughts about the Internet and Mike Meginnis’s “Angband, or His 55 Desires”

The internet is a compost heap full of old websites and technology and expired pop culture leftovers. Every once in a while, some enterprising artist grabs his or her pitchfork and turns the heap to reach the richest, oldest, most decomposed material. That fertilizes new growth. Vaporwave, a new musical genre currently flourishing on YouTube, Tumblr, and SoundCloud, is a good example. From the Wikipedia summary:

“Vaporwave is an electronic music genre… characterized by a nostalgic or surrealist fascination with retro cultural aesthetics (most commonly that of the 1980s and 1990s), entertainment technology, consumer culture and advertising, and many styles of corporate and popular music… Sampling is prevalent within the genre, with samples often pitched, layered or altered, sometimes in a classic chopped and screwed style.”

The journal The Collagist published Mike Meginnis’s experimental essay “Angband, or his 55 Desires” in early 2011. It follows an unnamed character as he becomes increasingly obsessed with Angband, a computer game originally released in 1990. The main character worries about his inability to connect with people, with his co-workers, with women, his own family. He seems anxious about his body—several hallucinatory passages describe him seeing his own body, naked, bathed in blue light. He tries to find somebody who will sell him drugs but fails to do so, and returns to Angband. He frets over his inability to find drugs, to

unlock the doors of perception,

26) to see what his waking mind and eyes could not see,

27) to have an interesting story,

28) to die without regrets,

29) to have one moment in eternity, or

31) to lie twitching on his couch, staring at the ceiling, and know that now he’d done it he need never to do it again, or

32) to unlock some profound memory, or

35) Something to anticipate the way he now anticipated food, but where the profundity of the experience could match the depth of his longing, in other words,

36) an addiction with some dignity.

37) A problem with some romance in it.

Meginnis spends a huge amount of prose on descriptions of the titular computer game. Angband is a Sisyphean slog through a 100-level dungeon set in the world of Lord of the Rings. When the player is killed by an orc or succumbs to a boobytrap, his save file is deleted, along with a character he may have spent days, weeks, or months leveling up. Many players play Angband for years before they beat it the first time. As you might imagine, the audience for such a game is very small.

Angband’s graphics, like those of many computer games of its era, are text-based, meaning they use repetitions of letters, numbers, and punctuation marks to signify images. Hash marks are dungeons walls. Periods are open space. Letters of various colors represent different monsters. An “@” signifies the player’s avatar. “Angband, or his 55 Desires” is presented in white Courier New font on a black background, to mimic the look of a vintage computer. It’s a format that can only be presented online, and Meginnis uses it to “quote” the game’s text.

To a modern gamer, ASCII text graphics are off-putting. They put a wall between you and the game world, force you to learn a new symbology if you’d like to play. For a modern web viewer, the experience of reading white Courier New font on a black web page is also alienating—like something dredged up from an earlier era of internet history. Meginnis’s prose frustrates easy understanding, as well: it’s repetitious, it stops to show us room layouts from Angband or detailed histories of when the computer game was ported to what system and in which programming language, it punctuates itself—sometimes mid-sentence—with numbers. 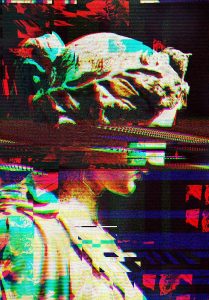 The Collagist published “Angband, or His 55 Desires” in early 2011, around the same time vaporwave was coming into its own on the internet, and around the same time artists and curators on Tumblr were discovering glitch art, a much older form of experimental art created by intentionally disrupting visual or audio electronic processes.

Nick Briz, an educator at the School of the Art Institute of Chicago, described a glitch as “an unexpected moment in a system that calls attention to that system, and perhaps even leads us to notice aspects of that system that might otherwise go unnoticed.” Glitch art, Briz writes, happens when “an artist intentionally leverages that moment, by either recontextualizing or provoking glitches.”

Meginnis’s essay feels glitchy. It is a weird visual artifact, shot through with language mediated by an ancient computer game few people have played, a piece of literature that could not appear in any medium besides the internet. It uses ASCII text graphics the same way glitch art uses graphical errors, the same way vaporwave artists chop up and slow down samples of Peter Gabriel and Diana Ross or plaster their album covers with the neon of long-gone decades.

The main character of “Angband, or His 55 Desires” is alienated from his peers, his family, from women, and finally, it seems, from his own desires. He plays Angband compulsively, apparently for years, although the essay is slippery about time: “He gave it up for a few months, a year. He said it made him angry… He found a wife and lost her. Came back to [Angband] where nothing really changed… He died, again. He died, again. He lived.” He seems to hallucinate that the game is speaking to him. He speaks of his desire to continue living in terms of Angband’s game mechanics:

50) that one good thing, the golden spark, that reason to keep living and

Obsession and obscurity gather around Angband like clouds around a mountain. It was programmed in 1990 by two students at the University of Warwick, who based it on an older game called Moria. Since then, stewardship of the code has passed from programmer to programmer, supported by a small but loyal internet fanbase and a few online forums. I visited the Angband forums and found them active. One player wrote in to celebrate his finally beating the game, after playing it “on and off for 17 years.”

The Angband community knows about Mike Meginnis’s essay. In another forum thread called “Strange Angband non-fiction” posted not long after the essay’s publication, one of the current stewards of Angband’s code writes, “You all may be amused or disturbed by ‘Angband, or His 55 Desires,’ a very strange stream-of-consciousness essay by Mike Meginnis. It features Angband heavily. I think that’s all I’ll say about it for now.” A poster appropriately named Buzzkill responds only, “I didn’t really care for the ending.”