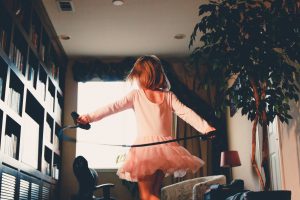 One afternoon, my friend Will and I were chatting at the playground as our toddlers played. We both worked from home and spent part of the week exclusively caring for our children, and we were discussing the frustration we felt when colleagues or clients expected us to answer their emails immediately. Don’t they know we have kids? We wondered.

“Don’t take this the wrong way,” I asked. “But do you ever get the feeling that ever since you became a dad you think your problems are bigger than everyone else’s?”

The changed focus of parenthood often leads us to place more significance on the minutia of childcare and forget the things we used to worry about before we were parents—such as someone not answering our emails in a timely fashion. This new focal point, in addition to the almost inevitable complaints about the most basic challenges of parenting (why can’t the baby wake up later than seven a.m. on weekends? Why does he have to throw Cheerios on the floor? Why is it raining just when we want to go for a walk?) has turned my attention to the entitlement that comes with parenthood.

Later that day, I met a group of parents who all stayed home with their children at least part of the work week. We all had toddlers and lived on a budget, but we were all also living in one of the nicer neighborhoods in Brooklyn. We were discussing the guilt we felt around complaining about the difficulties of child rearing. “It’s such a privilege to be able to stay home,” one of them admitted. We all agreed that, for us, spending less time working and more time with our children was a choice that was entirely in our control. We realized that most people didn’t have a choice—they either went back to work quickly after their children were born, or if childcare cost more than they were making at work they were forced to quit their jobs in favor of full-time parenthood.

“Can you say that again when my partner gets home?” one of them joked.

Of course, it was only half a joke. I imagine that, like me, these parents were still baffled by just how much subtlety revolved around the division of parental duties. When I was pregnant, my husband and I had discussed the birth and first few months, but we didn’t realize that questions of “who does what” would remain open for months, and probably years. Our grandparents had a fool-proof blueprint. In our parents’ generation, the division was still fairly traditional, but with time, the question has been asked more and more. Who should be tasked with being the primary caregiver?

For us, the choice seemed quite obvious. Since I am self-employed, I ended up caring for our child full-time for 10.5 months while my husband—a university professor—returned to work, occasionally working from home so he could be more available to us. After that, we put our son in daycare three days a week. Those are my work days, and on the other two days I am, once again, a full-time mother, though I do my best to get some work done while the baby naps.

Around the same time I was having these conversations with my friends, I began reading Rachel Sherman’s recently published book, Uneasy Street: the Anxieties of Affluence. In this work of scientific non-fiction, Sherman has explored the lifestyles and decision-making processes of some of the wealthier families in New York City, wealthier beyond anything me or my other child-rearing friends could ever imagine. The book offers some fascinating insight on the ways that very rich people try to normalize their anything-but-normal circumstances, the contrived pressures they place upon themselves to work harder and spend less, and the discrepancies and disagreements within households with regards to what kind of spending is justified.

Not surprisingly, the two arenas in which these tensions come to a boiling point are gender dynamics and children. Wealthy stay-at-home mothers are often forced to justify their spending choices around household upkeep and childcare, the unpaid labor at home remaining, after all these years, undervalued. They end up feeling conflicted—fortunate for being able to put their children first, but simultaneously corralled and controlled by their husbands, dependent on them financially, and devoid of sufficient appreciation and understanding. They grow to envy working women for their self-sufficiency and for not having to constantly justify themselves.

Reading the book, the trap seemed plainly obvious to me. Two people get married and realize that between them, they have quite a bit of money. The one with the lower-earning job (in heterosexual relationships, most often the woman) decides and is sometimes encouraged to stop working and devote themselves to the care of the children and the home. This is seen as a special treat, the ability to focus on the children and spend the rest of the time relaxing. Then, all of a sudden, it isn’t. If a stay-at-home mother develops her own non-paying world of interests (e.g. volunteer work or what Sherman calls “the labor of lifestyle”—managing renovations, coordinating with household employees, etc.) her husband might become frustrated with the money spent on childcare, or with her not being more available to him when he returns home from work. If the amounts the stay-at-home mother spends on groceries, services, school supplies, or children’s clothes seem too steep to her husband, she has to come up with a compelling explanation. He is the supervisor of funds and the one with the final say about expenditures. Even if his wife made just as much money as he did when she was still working, now that he is the one providing funds, the money is essentially his, and his confirmation is required to deem an expense valid. Suddenly, the right not to work becomes a duty to sacrifice a woman’s career for the sake of her family, and privilege becomes a prison.

The root of this problem is that women’s work—all kinds of women’s work—is perceived as carrying lesser value than men’s. Since women’s presence in the workplace is seen as secondary, they are paid less, and once they are paid less, their contribution to household economy becomes expendable. Because all women’s work suffers from this undervaluing, the labor of motherhood in particular—which these women are now put in charge of—is perceived as leisurely and frivolous, full of potential for unnecessary extravagance. Reading this book, I realized that the challenges my friends and I were facing were not exclusive to people who had to watch their spending and be thrifty about their kids. If even the richest people in one of the richest cities in the world were struggling with these questions, what chance did we have of figuring it out?

The ability to stay home with one’s children by choice is indeed a privilege. But that doesn’t mean it isn’t hard. Admittedly, sometimes parents complain so much about their children you’d think someone forced them to procreate. I catch myself trying to plan a perfect reality in which all of my child’s needs, and all of mine, are simultaneously met and laugh at myself for being naïve. But spending day after day bound to a child’s urges and whims, reading the same book over and over, picking up food from the floor only to have more chucked at you, alleviating a tantrum thrown because you wouldn’t let your toddler bite you repeatedly, and trying to get as much work done as you can in the unsteady and unpredictable timeframe of a nap while fighting your own fatigue, is nothing if not laborious. But what can make it truly excruciating is the realization that society assumes women were designed to do all this, that it is our job to take the lead in all matters related to parenting, that something must be horribly wrong with us if we are not interested in devoting ourselves to our children, and that if later we cannot also show sufficient success in our careers, then we have failed in proving that women are equal to men.

I am heartened to see couples around me attempt to divide the workload more equally. Some of them have made a practical choice—the father was the lower-earner so he quit his job; or the father has a more flexible work schedule so he takes on more hours while his wife adheres to her job’s demands. Other couples made a more emotion-based choice to have the parent who felt happier with their job continue to work, while the other took over the majority of parenting responsibilities. I am a big fan of stay-at-home dads, but I can’t help but envy the respect they garner from pretty much everyone around them (at least in my liberal neighborhood). They are doing the unexpected and going the extra-mile. They are inspirational stories, while us moms are just, well, moms.

Like me, many of my friends now utilize some form of childcare or other for at least part of the week, which brings relief, but also creates more confusion about our division of labor. Who does more? Who ought to do more? Who is more tired at the end of a workday—I, who spent the day working from home and then picked up our son from daycare and prepared his dinner, or my husband, who spent the day working at the office and then had to stand for thirty minutes in a crowded subway car? On days when the baby stays home, is life more challenging for the person spending the day caring for him or for the one sitting down at a desk to try to “make it”?

As a couple, and as a generation, we are still searching for an answer. Whenever I think we’ve unlocked a secret formula, something changes to cause one of us to feel frustrated and overworked. For the time being, I try to ignore any and all comments from the older generation about what is or isn’t my “job,” and be grateful that these questions are on the table.